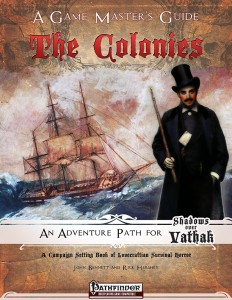 Analogue to the Player’s Guide, the DM’s Guide begins with hand-out-level detailed parchments providing an aptly-written in-character introduction to the matter at hand and provide a solid example of the threat suffusing the setting – and then, we dive into the respective local material. From the get-go, one realizes one thing – the crew of Fat Goblin Games obviously realized what ought to be in the GM’s guide – where the player’s guide sported tantalizing hints and general information on towns, the GM’s guide provides full-blown settlement statblocks. On a extremely nitpicky side, I’m not a fan of round numbers for the demographics listed for the various cities; I prefer exact numbers over general notions of population, but I’m aware that this is just me being exceedingly anal-retentive and hence will not influence the final verdict. No less than 10 settlements are provided – nice! But that’s not where the pdf stops – from eerie forests to cyclopean statues, quite a few local sights are provided for the DM to be inspired by and/or expand upon.

And then, immediately, the supplement turns into one downright inspiring read by providing a selection of fluff-only NPC-write-ups – and oh boy, are they AWESOME. Want examples? From shrewd politicians to cult leaders unwittingly under the control of Mi-Go to insane vampire alchemists, dhampir pseudo-monasteries seeking to teach about controlling bloodlust to twisted serial killers and beyond, these NPC-write-ups are glorious! Beyond them, we also are introduced to the local factions. From the ancient vampiric bloodlines to the werewolf packs roaming the land on to the enigmatic Church of the Unspeakable Masses and the mysterious Many Masks, quite a significant array of cool, inspiring information is given.

But that does not necessarily provide the DM with the tools to properly depict life in the colonies and that’s exactly where the pdf goes next – from general information to local holidays that OOZE flavor and yes, even common phrases that have their own significance, the material can be considered downright glorious – mainly due to, for the first time, managing to provide a concise, believable vista of what life in a dread realm like Vathak would be like – without devolving into grimdark splatter-fests, instead focusing on more subtle hints and hooks. Now speaking of locations – here, the guide just becomes more awesome – a number of locations are provided alongside DCs to gather information about them. HOWEVER, unlike *every* similar entry I’ve read, the information provided is just as extensive for those failing the check as for those succeeding in it, rendering the whole experience awesome. Yes, you will want to roll these checks yourself as a DM and the wealth of information provided for either way ensures that proper story-telling will continue either way. Two thumbs up! Better, further information to be unearthed via non-specified means (PCs asking allies etc.) also reaches that level of detail, allowing DMs to easily craft a rather detailed panorama/adventure via these pieces of information provided.

Speaking of the DM – Vathak has suffered in the past from a lack of focus – does it want to be gothic horror, cosmic horror or survival horror – while it supported all playstyles, its identity suffered and hence, the extensive pieces of advice provided for either playstyle and what to consider when running them should be useful for DMs. Speaking of variance – one of the things that annoyed me with the default vampires (and indeed, even with the expanded rules provided by Paizo) would be a lack of variables – we receive herein more than 3 pages of content providing alternate defenses and weaknesses, rules for more powerful, elder vampires etc. – a nice little toolkit, though honestly one I’d have loved to be expanded into a full-blown mega-template book. But that’s just the Ravenloft-spoiled DM speaking who made 21 unique bloodlines (not the sorceror class feature) for vampires for his home game.

We also receive two new monsters, each with their own, glorious artwork – the worm/wolf hybrdi Volworms and the bloodsucking vamplings – I didn’t do the math, but at first glance, I noticed no glitches in the statblocks – kudos!

Editing and formatting this time around are VERY good – I noticed no significant glitches or issues. Layout adheres to Vathak’s two-column full-color standard with glorious full-color original artworks – this book is drop dead gorgeous to look at. Alas, oddly, the pdf lacks any bookmarks, making navigation slightly less comfortable than it ought to be.

If you’ve been following my reviews, you’ll probably know that my first love as a campaign setting will always be Ravenloft. I adore the setting, its content and lore and have managed to track down each and every product for it. It is with the utmost respect I thus say the following – this is the best land/region-sourcebook I’ve read for any horror-themed/setting are since the legendary series of Doomsday Gazetteers by Arthaus or the superb free work by the Fraternity of Shadows. Author John Bennett finally manages to provide a distinct, concise voice for Vathak, one that gets what makes the respective modes of horror tick and work. Even if you are not using Vathak, this supplement can be considered an inspiring and fun read for DMs – its prose is vivid and fluent, its ideas diverse and whether its Carrion Crown, Ravenloft or any other horror-themed setting -you’ll probably get some awesome ideas out of this – the information can easily be extracted. That being said, this supplement, more so than the massive campaign setting, manages to generate a proper identity for Vathak. Add to that the nice vampiric expansion material and neat bonus critters and I arrive at a final verdict of 5 stars + seal of approval, in spite of the missing bookmarks. If that is the level of quality we can now expect from Vathak-supplements, consider me utterly hyped!

You can get this inspiring sourcebook/GM’s Guide here on OBS and here on d20pfsrd.com’s shop!