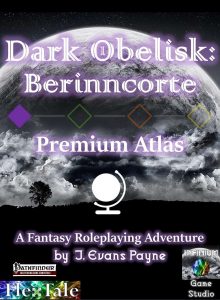 The premium atlas for the first part of the excessively detailed Dark Obelisk AP clocks in at a massive 139 pages, 1 page front cover, 1 page editorial, 2 pages ToC, 1 page mission statement, 2 pages of SRD, leaving us with132 pages of MAPS.

This book was moved up in my review-queue due to me receiving a print copy of it and due to being chosen as a prioritized review via my patreon.

Yes, you read correctly. 132 pages of maps. Now, first things first – what kind of maps do we get? The book is roughly separated in 4 different chapters: Two featuring maps for Act One of “Dark Obelisk I: Berinncorte”, two representing the changed circumstances that can be found in Act 3 of the massive module.

As you may have deduced, one such chapter each contains the respective GM-maps, one the player-maps. The GM-maps feature keys on them, secret doors and the like – and the player’s maps can actually be used as handouts as is: The deceptive numbers and secret door/trap notes have been completely purged from those iterations – which is a COLOSSAL plus as far as I’m concerned. Heck, even crawlspaces, noted on the GM-map, have been redacted – on the player map, a solid wall separates the two connected caverns. That’s going above and beyond. Big plus!!

Now, let’s talk a bit about the maps within, starting with the least pleasant component. The overview map of Berinncorte is easily the worst and only map in this atlas I’d consider bad. The city is almost quadratic and a bit claustrophobic – it’s only an overview and not the most impressive one at that. HOWEVER, that is about as much negative things I have to say about this book. You see, the atlas contains maps for EVERYTHING.

No, that is not a hyperbole. If it’s within the walls of Berinncorte, it’s mapped. Little militia hut? Mapped. Cryptkeeper’s shack? Mapped. Cellars? Mapped. In subterranean environments, you can see the barely visible outlines of buildings above, in case your PCs want to do a bit of digging. In short: The attention to detail is impressive indeed. The full-color maps show benches, columns, barrels, wood – basically, they show every non-dynamic object/creature, providing significantly more detail than what you’d expect. While made with software, they look much better than pretty much all computer-generated maps I’ve seen before. Heck, you can see the symbols on rugs, the textile shop has differently colored rolls of cloth on the counter – it is rather impressive to see this amount of detail.

Now, something to be aware of regarding the town of Berinncorte, would be an architectural peculiarity that may or may not irk you and may or may not be due to the limitations of the software used to make these maps: The lower residential area and upper residential area do not consist of free-standing houses, but, at least from what I gathered, look like multiple folks live under the same roof in a kind of apartment-like situation. In the case of the upper residential district that could be explained by guest rooms and the map could make for ONE big, nice mansion – but the overview map and the holistic coverage of the rest of the town make it look like this is the totality of the district. Now, granted, that is NOT unheard of – in fact, it was more common than most folks would expect, at least according to the chronicles of cities I’ve read, but it represents a departure from how most folks picture a fantasy city, so that’s certainly something to bear in mind. Personally, I’m good with this decision, mind you. Still, if one such building indeed is all there is, then the beds as opposed to the characters, including militia etc., even when taking barrack beds into account, don’t check out. (And yes, this will not come up in 99.9999% of games and should tell you something about how obsessive I can be…thus, it will not influence the final verdict.)

Now, I have already mentioned that there is a cataclysm in Berinncorte at one point – and thus, the Act 3 maps may depict the same environments – but they are radically different from what we’ve seen before – bloodsplatters, shattered columns, smoke, ash…and worse. Corpses litter the streets and buildings and nary a place has been left intact, with walls incinerated and STRANGE things popping up on the maps – they may depict variants of the maps we already covered, but they do so in the best of ways. Now, on some of the player maps, fixed monsters appear, denoting enemies that constitute living “no trespassing” signs – but since these critters are tied to the respective locales, I’m good with that. Still, personally, I would have preferred these tokens to be omitted – or added on their own token-page for the GM to cut out and move around. Oh well.

Obsessive level of detail. That’s how I’d describe “Dark Obelisk I: Berinncorte” in a nut-shell. The hand-crafted maps contained in this atlas perfectly encapsulate this philosophy, providing the attention to detail and sheer amount of maps I wanted, all in full-color! The pdf version comes with a second, background-less printer-friendly version and the respective maps sport their own scales, another plus. The electronic version did lack bookmarks, but as per the writing of this review, bookmarked versions have been made available – kudos for the quick response/fix there! The color hardcover is definitely the way to go, if you can afford it.

J. Evans Payne went above and beyond and even redacted crawlspaces, secret doors and the like, adding some serious value to the book at hand. Speaking of value: This massive map-material is also included in a massive (300+ MBs!) archive, which contains all the maps as high-res jpgs for VTT-use. These individual maps are properly named “-GM” or “-Players” and are further organized by Act for your convenience. That’s going above and beyond, as far as I’m concerned.

It should be noted that these maps, while obviously intended for use with the adventure, may well be worth the investment if you’re looking for a fully mapped fantasy town.

So, how to rate this? Well, I really, really like this map book. It delivers everything I wanted from it, with only minor flaws: Tokens on a precious few maps; the overview map is not nearly on par with the cool maps of the individual buildings/environments. Still, as a whole, I feel justified in rating this 4.5 stars, rounding up due to in dubio pro reo and the fact that this is part of a freshman offering.

You can get this massive map book here on OBS!
Endzeitgeist out.