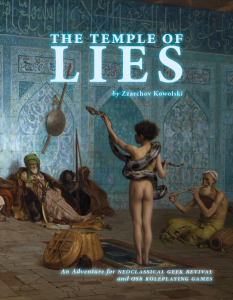 This little module clocks in at 16 pages, 1 page front cover, 1 page back cover, 1 page editorial, leaving us with 13 pages of content, so let’s take a look!

As with all dual-format modules by Zzarchov Kowolski, this adventure provides general stats for OSR-games, which are pretty basic. To give you an example: “A level 1 thief. Unarmoured with a high dexterity bonus. Attack as weapon + poison. Excellent morale. Speed of an unarmoured man.” As you can glean, this gives you an idea, sure, but it does mean that you’ll have to hack this into shape.

The second set of stats is for Zzarchov Kowolski’s own game, Neoclassical Geek Revival, which is abbreviated as “NGR.” NGR is an amazing game. It takes a bit of time to get into, but it does Stealth really well, emphasizes player-agenda and from customizable spells to martial traditions does an excellent job at creating a smooth and fun playing experience – it’s one of the few systems that manages to marry old-school feeling and aesthetics with the design-improvements of more contemporary games. If you do have the luxury of choice, play this with the NGR-rules.

Now, as far as organization is concerned, this is smart: NPCs and enemies are provided with red text; treasure is noted in green text and general terrain features are printed in blue. This makes spontaneously running the adventure surprisingly manageable if you’re fluent in your system of choice. Otherwise, I’d recommend at least a bit of prep-work. Stats are collected in the back and provide information for pretty much anything that can be interacted with. The treasure-appendix deserves special mention for its exemplary attention to detail. We get descriptions for pretty much everything of value within. Yes, gp values are provided for things like silk curtains and the like, so if your PCs tend to loot everything that’s not bolted down, you’ll definitely appreciate this. Orange text is used to denote hidden dangers.

The inside of the front cover contains a b/w-map that is isometric – but which, alas, lacks a scale or indicators like squares to denote the dimensions of a room. The map also does not specify where North is. No player-friendly version of the map is provided, which is a bit of a bummer.

Now, as for level-range, the module is designed for levels 1 – 2, though personally, I’d use it as an introductory module, as one of the ways to use this module subverts a central tenet of how adventure modules are written nowadays…and I love this subversion and what it can bring to the table.

There is one more thing to note: The black humor is strong with this one. I actually chuckled a couple of times while reading this adventure for the first time. “The Temple of Lies is a small light hearted adventure about the typical shenanigans one gets into involving human sacrifice and severe opiod addiction” – to paraphrase the publisher’s blurb. The book does contain references to evil cult practices, but they remain pretty tame. I consider this to be basically PG 13. Unless you’re already appalled by a pdf mentioning sex in a non-explicit context, this will not shock you or anything. It can be sanitized pretty much on the fly, if you’re picky about the like.

The front cover artwork, depicting a piece by Jean-Léon Gérôme, one of the artists of what is now known as academism, shows one of his pieces in line with his Orientalism-phase. “The Snake Charmer” pretty much encapsulates the atmosphere of the adventure – we have a decadent tale that could well be set in one of Conan’s desert kingdoms, most places like e.g. Qadira in Golarian, Al-Qadim, etc. Since the adventure takes place almost exclusively in a dungeon-complex, reskinning to e.g. Victorian or fin de siècle England and similar contexts is very much possible without much hassle. The module can easily be inserted into another adventure – in fact, that’s how I used it once: Just have McGuffin/fugitive run inside/vanish and there you go. An extraction, PCs fleeing into the place, etc. is similarly possible. The PCs just have to stumble into a back alley – that’s all.

All right, this is as far as I can go without getting into SPOILERS. As always, potential players should jump ahead to the conclusion.

All right, only GMs around? Great! So, the alley provides access to a cellar, guarded by thugs and beggars, who are actually killers in waiting – managing to survive through these, the PCs enter the complex, which is basically a combined opium lair/serpent cult crossover. If they’re not careful, they may trigger an alarm. As a minor complaint, for NGR, I would have liked Suspicion increases noted, but the game is designed to allow for defaulting here, and the RAW assumption is that triggering the alarm results in awareness of everyone. The alarm is basically small hammers striking massive crystals, btw. – there is a sense of the fantastic in the very first room, and this is further emphasized by the rather vile serpent cult members: There are, for example, so-called “nuns” that have scales tattooed all over their bodies, and tongues split.

There is a very deadly pit of writhing snakes in the complex, and the centerpiece of the cult is a massive python. This very much resounds with Conan’s Stygians and their Set-worship, right?

Well, here is the unique part, the subversion I mentioned: The serpent cultists may all be deluded hacks and addicts. The high priest may be either a holy man of a dark religion…or a charlatan who has brainwashed/conned the cult. Yes, with separate stats. Any supernatural component of the module, from the high-priest’s stats to the treasures found, is entirely optional. There may be a serpent demon lurking in a sarcophagus…or just a mummified snake. This is amazing for a couple of reasons.

For one, just because that crystal in the beginning *looked* magical, it doesn’t have to be. In fact, it’s mundane. Similarly, this establishes a gritty, low-magic aesthetic that elevates *actual* magic showing up at one point during the campaign. It also does not detract from the module, and rather elevates it in my book. Why? Because, even if we’re playing in a low-magic game or campaign setting, we expect to stumble over magic. It’s just part of the deal, and chances are that one PC or another *will* have magical powers. That makes the impact of the mundane hit much harder. It also humanizes and contextualizes the behavior of the addicts/victims. If no supernatural evil is responsible, that makes the body-modifications and abhorrent human sacrifice practices hit harder. I love this.

As an aside: If you do want to go for a magical serpent cult, I recommend Rafael Chandler’s “Obscene Serpent Religion” for abilities and depraved concepts you may want to flesh out. Beware, though: That book is definitely for mature audiences!

Editing and formatting are very good on a formal and rules-language level. Layout adheres to a no-frills, two-column b/w-standard, with color used to facilitate running the adventure. Experienced GMs should have no issue running this off a b/w-print-out. I did just that. The pdf has no interior artwork and I liked the cover artwork, as it establishes the themes of the module. Yes, there’s a naked backside on it. Personally, I don’t mind – it’s about as sexual as a Greek bust. The cartography is functional, but pretty weak. The pdf has no bookmarks, which is an annoying comfort-detriment for the electronic version.

Zzarchov Kowloski’s “Temple of Lies” is a fantastic introductory module that oozes pulp flair galore. Its down-to-earth nature and two play-modes enhance replayability. The details are surprisingly concise and best of all – this is PWYW. It is definitely worth the suggested donation, and manages to be better than quite a few commercial modules I know. It is smart, atmospheric and just plain fun – it manages to execute the old trope of the serpent cult with panache and grace. That being said, were this a commercial module, I’d have to detract from the final verdict due to the lack of player-friendly maps and bookmarks, but as a pay what you want offering? Very much worth checking out!

As such, my final verdict, taking the PWYW-nature of this module into account, will clock in at 5 stars + seal of approval. If you’re looking for a great module to kick off your sword & sorcery campaign, this delivers in spades and is definitely worth a tip.

You can get this adventure here on OBS for PWYW!

You can also get this in print, but exclusively via the kickstarter that is currently running…for a few more hours! You can check out the NGR-kickstarter here!