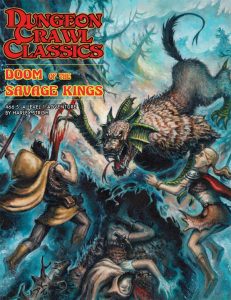 This module clocks in at 20 pages, 1 page front cover, 2 pages of editorial, 1 page advertisement, 1 page back cover, leaving us with 15 pages of content, so let’s take a look!

This review was sponsored by one of my patreons, to be undertaken at my leisure.

All right, this is a first level module for Dungeon Crawl Classics, and in case you’re not familiar with the system and the offerings by Goodman Games, it should be noted that level 1 is not the lowest level there is. It should also be noted that there are no less than three GORGEOUS b/w-maps, with artwork and everything, included in the deal. One map for the village of Hirot, one for the wilderness, and one for the dungeon. Now, I know that pretty much the whole series suffers from this, but I will still continue to complain about it: The maps, stunning though they are, are neither layered, nor are there player-friendly versions provided. While I can understand this somewhat for the dungeon, it’s somewhat annoying regarding the map of the village.

Anyways, this dungeon is not a cakewalk, and DCC is, aesthetics-wise, a pretty challenging game, so yeah – if you’re not up to your A-game as a player, your PC may well die. This is one important thing to note: This book emphasizes PLAYER-skill and agenda over PC-skill and agenda. If you get your character killed, it’ll very likely be because you screwed up as a player, not because of a dickish save-or-die. All deadly challenges within this module felt fair to me. Yes, even the at times very high DCs (for DCC): 23 could only be made by super high AGI chars with a natural 20. On the other hand, clever PLAYERS can prevent this DC from ever coming up, even when triggered. I really adore this design-sensibility.

Theme-wise, this module assumes a quasi-Norse, pulpy environment and should work without a snag in such a context. The other, super-obvious analogue, would be Beowulf. This is basically a dark fantasy-retelling of a variant of Beowulf and mirrors leitmotifs of sögur of the age, contrasting old paganism and fanatically upheld “new values.” In other fantastic contexts, you may need to do a bit of reskinning regarding titles etc., but don’t let that deter you. The pdf does offer quite a lot of read-aloud text for an adventure that champions an old-school aesthetic, and it is better off for it. Beyond this flavorful text, even the non-read-aloud text offers a fantastic atmosphere – the prose throughout this module is fantastic and frankly is beyond anything most longer modules manage to achieve.

All right, since this is an adventure review, the following contains SPOILERS. Potential players should jump ahead to the conclusion.

All right, only judges around? Great! We join the heroes as they trod through the sodden, darksome moors surrounding Hirot; to be more precise, the heroes as they happen upon locals preparing to sacrifice a maiden! The local Jarl will not be happy if the PCs do intervene, and neither will the grim and frightened mob – but standing against the heroes is a bad idea, so chances are good that the PCs may prevent the sacrifice, which will be helpful, as we’re talking about the innkeeper’s daughter here…

Anyways, this encounter foreshadows a lot and sets the delightfully grim and shades of grey tone of the adventure. The lavishly-mapped village, ringed by palisades, is in the grip of fear. The so-called Hound of Hirot, a dread monster, is ravaging the town in predictable intervals, but it seems to be immortal. A d24 table of rumors accompanies the adventure and helps further enforce the atmosphere of xenophobia and fear.

Contrary to the beliefs fostered by the Jarl and his nasty advisor, the Hound can be hurt by mortal weapons – just not slain. Vanquishing it only draws out the inevitable, rage-fueled retributive rampage. There are mystic ways to bind and truly destroy the hound. You see, the module, in spite of its brevity, is actually surprisingly freeform: There are several ways to stop the dread Hound of Hirot…and the PCs better hurry, for there is a lottery going on…and the Jarl and his cronies rig the game to get rid of problematic beings….like the PCs. Oh, guess what? The dungeon? It’s optional. How’s that for guts? A module with this page-count, and it’s so freeform that you can skip the dungeon. And yes, it pulls this off.

The Hound must be bound to slay it: Supernatural power (Strength + good dice rolling) will do the trick; alternatively, the local mad crone offers to weave shackles from the hair of the dead – which can bind the Hound, but woe to the PCs that try to cheat her…she wants to marry one of them in exchange for the service, the whole subplot resonating with mythological tropes.

Speaking of which – there may be another way, and this one actually involves the dungeon: Namely the Wolf-spear of Ulfheonar, which lies in an ancient barrow-mound, where, among other riches and potential doom, a magical cave-bear’s hide may be found. This also is a great place to note the one thing that is most likely to kill off PCs – the mound contains a false tomb with an ingeniously-rigged trap that you can’t best by rolling, only by actual smarts. I loved this, and the b/w-artworks help maintain the atmosphere here. The tomb is also constructed in a way that made sense to me, which is another plus. The true tomb, undead and the means to access it are inspiring and clever (and neatly visualized on the excellent map)…but the module does not end there.

Exiting the mound, the PCs will be assaulted by the Jarl’s men, who seek to kill off these dangers to his power-base…and the PCs may well have to track the Hound of Hirot through the dangerous wilderness to its lair…where a blackened pool offers power, but also madness…and unwise PCs may actually become what they have fought so hard to slay…

Editing and formatting are top-notch on a formal and rules-language level. The layout adheres to a nice two-column b/w-standard and the pdf comes with amazing b/w-artworks and stellar cartography, though the lack of player-friendly maps is a pity and comfort detriment. The pdf comes with basic bookmarks for its sections. I can’t comment on the physical version, since I do not own it.

Harley Stroh’s tale here is fantastic. It feels like it was taken straight from the pages of pulp literature and hits the themes of pulpy dark fantasy perfectly. The prose is phenomenal and the module, as a whole, actually has some replay value for the judge. How good is this? Well, good enough to make it worth converting to other systems. If you’re already playing DCC, then this is glorious. Even if you aren’t, this is well worth getting for the amazing prose and dense, evocative atmosphere. This is a fantastic first adventure for the system and establishes a level of quality only rarely seen. Don’t be fooled by the brevity – this has a lot of amazing gaming waiting for you. In spite of the lack of player-friendly maps, my final verdict will clock in at 5 stars + seal of approval. This is a truly fantastic yarn, a must-own for DCC-groups, and a great buy for other systems as well. Seriously, the atmosphere is phenomenal.

You can get this genius, amazing adventure here on OBS!