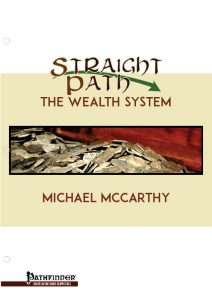 This pdf clocks in at 15 pages, 1 page front cover, 1 page editorial, 1 page ToC, 2 pages of SRD, leaving us with 10 pages of content – for the screen-version, that is. We get a separate version for the printer, which presents all information on 5 pages in a classic layout (as opposed to the tablet-optimized screen version). Kudos for going the extra mile there. The supplement also features an extra pdf, a handy one-page cheat-sheet, but I’ll get back to that later.

So, the wealth system presented herein would be basically an abstract system to handle the affluence of PCs via an attribute – Wealth. Upon character creation, a character begins play with Wealth equal to their Charisma modifier + their character level, minimum 1. Upon gaining a level, the character’s wealth increases by a further +1, up to a maximum of the character level + Charisma modifier + 3. When an item is used, no longer required, etc., you just erase it from your sheet: Items are assumed to be part of the wealth accumulated by the character. Basically, this system gets rid off haggling, selling, etc.

The second term defined herein would be Value: This measures the worth of goods and services. The gp-equivalent Value increases exponentially. The pdf provides a table that lists gp-Value-conversions, ranging from 100 gp (Value 1) to 307,200 gp (Value 24). Okay, this may help when acquiring valuable objects, but what does that mean for you? Can your character afford the concrete item xyz with his abstract Wealth? The system is simple: If the value of the object character is -5 lower than the character’s Wealth, the concrete item to be purchased is so relatively inexpensive, it’s not worth noting and has no bearing on the character’s Wealth. Anything with a Value of Wealth -4 is considered to be Pocket Change. A character can acquire up to 15 such items per downtime period. Additional purchases decrease the character’s Wealth by 1. Objects with a Value of Wealth -3 are considered to be Readily Available. 5 such items may be purchased per period of downtime. As always (and in all other instances below), going beyond that, reduces the Wealth by 1. Values of Wealth -2 or Wealth -1 are Affordable. 3 such items can be purchased per period of downtime. A Value equal to Wealth are Big Purchases. A character may only have purchased one such item at a time. Purchasing a second reduces Wealth by 1.

Now, obviously, Wealth can be pooled. The highest Wealth is used to determine starting Wealth. Each character contributing to the Wealth of the pool can increase the Wealth of the pool, but only if the character’s Wealth is within 3 points of the current Wealth of the pool. In order to avoid exploiting this, the maximum increase is equal to the character’s wealth +4. The pool can purchase one item with a Value up to the pool’s Wealth. Until this item is returned/sold, all contributing characters reduce their Wealth by 2. Losing the item makes this reduction permanent, obviously. Shopping for others counts against the limits of the character actually spending the money.

There also is the concept of Credit. Taking an item on Credit temporarily reduces Wealth by 2 or more and prevents you from increasing your Wealth by selling items. If you return the item, the restrictions are removed. Keeping it makes the Wealth reduction permanent. One item with a Value of Wealth +1 or +2 can be purchased on credit, but selling it can’t increase Wealth. Only one such item can be purchased per downtime period.

Now, we all know that adventurers sometimes get their hands on items that far exceed their usual monetary means – hence, items with a Value of the character’s Wealth by +3, +4 or +5 or higher have special rules: Wealth +3 items increase the Wealth of the seller by +1. Wealth +4 items increase the seller’s Wealth and that of another character by +1. Items with a Value of Wealth +5 or higher can’t be sold – at the GM’s discretion, these may still be sold, but should not ncrease the PC’s Wealth by more than the item’s Value -3.

While mostly player-centric, the system can make shopping easier for the GM – all those +1 weapons and armor will no longer accumulate their gp values in this system – using a creature’s CR as Value guideline would account for that creature’s Big Purchase. Finally, we take a look at a handy table that notes the value of common equipment.

The cheat-sheet is really handy, summing up all the rules and featuring lines for valuable items to track, a line for “currently on credit” and lines to keep track of total purchases per downtime period.

Editing and formatting are very good – while I noticed a missing italicization in reference to a magic item, as a whole, this is professionally presented in both formal and rules-language criteria. Layout adheres to a landscape-two-column standard for tablets etc. for the screen-version and the printer-friendly version really deserves its name. Kudos. The screen-version comes fully bookmarked for your convenience.

Michael McCarthy’s Wealth-system will be a godsend for many groups – it is not a perfect system, but its simple and easily grasped abstractions help dealing with the minutiae of adventuring without eating everybody’s time.

In short: This succeeds at what it sets out to do. The cap for pooling and purchases, subservient to the GM’s definition of what constitutes a downtime period, means that the GM retains full control over this system. Now, the wealth system obviously isn’t for everyone – if you want a game, where player wealth oscillates strongly, then this does account for it, but not to the extent of “rags to riches and back”-scenarios – you won’t see Conan-esque fluctuating fortunes. Similarly, and you will have already gleaned that, if you enjoy the minutiae of selling, haggling, etc. and/or e.g. use kingdom building rules, this becomes somewhat less useful.

That being said, for what its intended purpose is, this most assuredly works well: If you hate the selling/purchasing aspect, the WBL-tracking etc., then this is definitely for you and may even potentially rank among your most beloved purchases, particularly considering the low and fair price point. This is not made for me – but I can see a lot of folks enjoying this system. My final verdict will hence clock in at 4.5 stars, rounded up for the purpose of this platform.

You can get this inexpensive, easy to use Wealth System here on OBS!