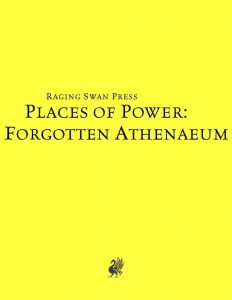 As such, the knowledge pertaining the place is relatively obscure, something that should be borne in mind by referees, and the librarians that maintain the place are a relatively eclectic lot, unified by dressing habits and appearances, in spite of their diverse worlds and planes of origin. This is as well a place as any to note that the classes referenced have been properly adjusted to reflect the preferred designations of old-school gamers: Magis-users, thieves, etc. can be found in these classes referenced. The supplement details the daily proceedings in the athenaeum, painting a concise picture of daily life and circumstances, as well as on how to get PCs actually to it, how these beings are introduced to the place, etc.

Now, this being the system neutral version, I obviously have nothing regarding research-mechanics to complain about. The pdf is also careful to make sure that references to spells have been properly adjusted to refer to the respective, classic monikers, so yeah – well done.

Richard Green makes clever use of the planar properties of the astral plane for this refuge of uncomfortable truths and heresies. The place is clever, easy to integrate into a given campaign, and while I slightly bemoan how much text is spent on its genesis, I can see the necessity. This place, in short, is a really cool sidetrek/goal-destination that can make PCs enter an otherwise unrelated dungeon: There’s an entry there, go! Easy angle to implement. So yeah, this aspect is rather cool. The system neutral version of this place, to me, is the best one – both PFRPG and 5e-versions, to one degree or another, offer only a very simplistic benefit for consulting the library, which may feel anticlimactic. Since this version eschews mechanics for the like, it is also, ultimately, the version against which I can field no viable gripes. The conversion is solid and thorough, and thus, my final verdict will clock in at 5 stars for this iteration.

You can get this neat location here on OBS!