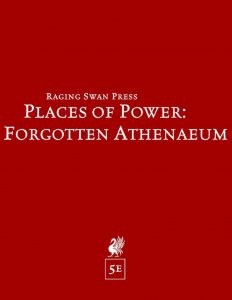 As such, the knowledge pertaining the place is relatively obscure, particularly in 5e – the lore-DCs are pretty damn high, which, in this case, is a good thing as far as I’m concerned. The librarians that maintain the place are a relatively eclectic lot, unified by dressing habits and appearances, in spite of their diverse worlds and planes of origin. The supplement details the daily proceedings in the athenaeum, painting a concise picture of daily life and circumstances, as well as on how to get PCs actually to it, how these beings are introduced to the place, etc.

In the 5e-version, the research bonuses conveyed by the library are translated into Intelligence checks made at advantage, with +2 to the check if the knowledge sought is banned/heretical. I’m good with that, though I wished that the rules specified how this interacts with features that already net a character advantage on such a check. References to NPCs have been redesigned properly to point towards the respective default NPC-stats 5e employs.

Richard Green makes clever use of the planar properties of the astral plane for this refuge of uncomfortable truths and heresies. The place is clever, easy to integrate into a given campaign, and while I slightly bemoan how much text is spent on its genesis, I can see the necessity. This place, in short, is a really cool sidetrek/goal-destination that can make PCs enter an otherwise unrelated dungeon: There’s an entry there, go! Easy angle to implement. So yeah, this aspect is rather cool. The 5e version of this supplement works smoother than the PFRPG-iteration, courtesy of the lack of a unified research rules-array in 5e. That being said, if you’re REALLY stingy about 5e’s peculiarities, you may object to a druid having an owl animal companion, for example – this is only mentioned in the flavor text, but yeah. Some of you may object to that. All in all, I consider the 5e-version to be slightly stronger than the PFRPG version, which is why my final verdict will clock in at 4.5 stars, rounded down for the purpose of this platform.

You can get this library here on OBS!