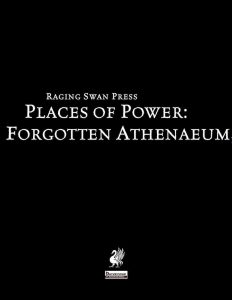 As such, the knowledge pertaining the place is relatively obscure and the librarians that maintain the place are a relatively eclectic lot, unified by dressing habits and appearances, in spite of their diverse worlds and planes of origin. The supplement details the daily proceedings in the athenaeum, painting a concise picture of daily life and circumstances, as well as on how to get PCs actually to it, how these beings are introduced to the place, etc.

Now, there is one thing that I particularly bemoaned regarding the locale as presented: RAW, it yields a bonus to Knowledge checks (+4/+6, respectively) to research materials. Which is all fine and dandy, however, Ultimate Intrigue did introduce rather nice and compelling rules for research, and it would have been really nice to see those implemented, at least in a sidebar or the like.

Richard Green makes clever use of the planar properties of the astral plane for this refuge of uncomfortable truths and heresies. The place is clever, easy to integrate into a given campaign, and while I slightly bemoan how much text is spent on its genesis, I can see the necessity. This place, in short, is a really cool sidetrek/goal-destination that can make PCs enter an otherwise unrelated dungeon: There’s an entry there, go! Easy angle to implement. So yeah, this aspect is rather cool. That being said, I do not object to the relatively rules-lite way in which the benefits of the library are presented, but implementing research rules/library stats would have added to the immediate functionality of this pdf for its PFRPG version. As such, while I really enjoy the location, I am slightly less smitten by the execution for this system. My final verdict can thus not exceed 4 stars.