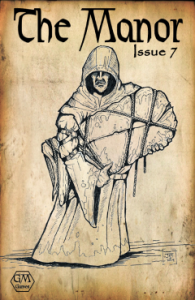 The seventh installment of the OSR-‚zine „The Manor“ clocks in at 27 pages, 1 page front cover, 2 pages editorial/ToC/introduction, 1 page advertisement, leaving us with 24 pages of content, laid out in 6’’ by 9’’-booklet style.

The book sees the return of one of my favorite series from the early installments of the ‘zine, with Boltswitch’s Mobile Potion Emporium, penned by Boric Glanduum. The eponymous Boltswitch is basically a gnome snake-oil salesman, but one whose potions actually do something! Granted, not necessarily what you *want* them to do, but Boltswitch seems to be pretty up front about minor…peculiarities. Adak’s essence of age, for example, seems to be duplicating haste, but for briefer periods…and it eats up your lifespan. The unique component of this article would be that it is system neutral…and it is penned wholly in character. Boltswitch’s descriptions of his unique potions, his sales-pitches and the like, are really nice and useful, helping the referee/GM get into character. Particularly if you’re not that good with text-improvisation, having an extensive array of comments to paraphrase should be rather helpful. On the downside, while the text does an impressive job at conveying the benefits and drawbacks of the potions sold, the lack of precise effects for them feels unnecessary. Considering the brevity of rules-text that good OSR-mechanics can take up, it would have been nice to get a page of actual, mechanical benefits here.

The second article is penned by Joshua De Santo and introduces the skinwalker (coyote) class: Prime attributes would be Dex and Wis 13+ (with the customary 5% experience bonus) and HD are 1d4s. Skinwalkers are restricted to leather or chain armor and may not use shields. Weapon-wise, they are restricted to daggers or longbows – the latter restriction is a bit weird. Why not shortbows as well? Skinwalkers need to be neutral. Skinwalkers get low light vision, which is somewhat odd, considering how most OSR-rulesets know darkvision, infravision or x-ray vision, with low-light vision being something you see in more recent and rules-heavy systems. At 1st level, the skinwalker can change to coyote form and back once per day, +1/day at 3rd level and every 3 levels thereafter. Okay, question: Is that always the same coyote form or can he assume different coyote forms? The skinwalker can use thief skills like a thief of one level below his character level. This should probably be gained at 2nd level, since 0-level characters usually have no thief skills. At 2nd level, skinwalkers get +2 to rolls to determine whether a person is lying to them. This is…kinda weird, since most commonly-used OSR-games do not roll for the like, using roleplaying instead. This makes the ability somewhat…useless sin quite a few systems. At 6th level, the skinwalker can produce minor glamors, such as changing color on herself or the target. No range, duration, save or limitation is provided. Saving throws improve from 16 to 7 and the class gains the first level at 2,500 XP, doubling required XP until 40K (4th level), whereafter we have a 20K per level requirement until 8th level – thereafter, it’s 50K per level.

I do not like this class one bit. It feels like an attempt to design for 5e that was aborted mid-way and jammed into OSR-games. The potentially interesting abilities are left to the referee to codify, which feels somewhat lazy.

Chris Coski has probably read about fabled Thuzun Thune: In a system-neutral article, we are presented with no less than 8 different magic mirrors, as well as quite a few really nice b/w-artworks. The article introduces such gems as the mirror of mediocrity or the mirror of mortis, which shows one of the myriad, gruesome way in which the viewer may die. I loved this article! It is pretty damn cool and authors that plan on jamming the oomphteenth mirror of opposition into their modules should take heed! That being said, I wished we got stats for them as well.

Beyond a funny mind-flayer haiku, we also have a micro-adventure by Simon Forster: One page map, one page explanation…and it can actually become pretty lethal pretty fast and sports stats for the BBEG, which are system agnostic, yet precise enough to use them smoothly! Kudos!

Now, this installment also sports a full-blown adventure, the Horrid Caves, penned by Garrison James, intended for 1st or 2nd level characters. Difficulty-wise, I’d consider the module to be hard – it definitely requires a well-rounded group. While I’m not the biggest fan of the font used, the adventure is a highlight – not just for this issue of the ‘zine, but for its whole run! I am NOT exaggerating! You see, it actually comes with no less than 7 new, precise and meticulously crafted spells, it also sports a summon-chart for one encounter and an extensive random encounter chart. Formatting here is precise as well – italicized spells, ascending and descending AC, precise rules…and a ton of unique monsters, which include flammable vermin that take more damage by fire, but also become ridiculously fast while ablaze. Even cooler: The strange ecology of the caverns makes sense – clever players are rewarded for observing how the weird fauna interacts with each other. Better yet: The module is really versatile: It can easily fit into traditional fantasy, into weird fantasy, or work just as well in a post-apocalyptic context or in a Sword & Sorcery world – more on that below. It also has a distinct vibe that DCC judges will most assuredly love.

Okay, from here on, SPOILERS reign. Potential players should jump ahead to the conclusion.

Once upon a time, an inhuman warlord and his crustacean soldiers from another plane were cut off from their means to return; separated from their spawning pools, these beings arrayed themselves in formation for the death to come, as they would for battle – and now, their caves have been breached. In the caverns, strange tadpoles levitate through the skies, only to explode upon death; a severed, undead head makes for a formidable spellcaster and the undead husks of chitin-creatures shamble through the complex, potentially leaving strange seeds behind. Tubular snails spew blinding fumes, and lime-green spiders…actually are mostly harmless for PCs, but can color the skin of their bites temporarily lime green. Hooray for mammals being for once not subject to all poisons. Of course, these spiders can collapse into green slime. Which is very much deadly for mammals. But hey, it takes a bit of time and doesn’t happen always…so don’t chuckle to hard in advance… A twisted idol can temporarily grant supernatural fecundity, though offspring born with have a crayfish-like face. Hexagonal blue-green-glazed tiles contain spells that fortified against the then-cutting edge bronze weaponry, and magic-users can learn to leave organic, semi-permeable membranes in their wake. There also is a spell to target gills in particular, which may be of more use than at first glance. A primordial ancestor of black puddings, the black oil, slimes away in a recess of the dungeon, and a snail-pearl may be valuable…but while in the complex, it has a nasty habit of summoning giant, carnivorous snails! Oh, have I mentioned the ancient, magical paintings of a time long gone? This adventure is mechanically-precise, has a cool map, and can fit into a ton of different games. It also represents a challenging, fun and amazing adventure. It warrants the low and fair asking price pretty much on its own.

Editing and formatting oscillate a bit between articles regarding their quality, but can generally be considered to be good when seen as a whole. Layout adheres to a 1-column b/w-standard, with a surprising amount of nice b/w-artworks I haven’t seen before. Cartography is b/w and similarly nice, though, alas, we do not get player-friendly, key-less versions of the maps. The pdf comes fully bookmarked for your convenience.

The 7th installment of the Manor represents, in a way, a highlight in the ‘zine’s run: The system neutral articles are both inspiring, if held back a bit due to their lack of precise rules. The micro-dungeon represents a surprisingly fun diversion as well. The class, on the other hand, alas, falls short of what it easily could have and should have been. Just because something’s written for a rules-lite OSR-game doesn’t mean that the rules get to be shoddy – precision is key and NOT anathema to flavor – see e.g. Gavin Norman’s phenomenal work, for example.

And then, there would be “Horrid Caves.” This dungeon is frickin’ amazing and warrants the price of the magazine all on its own. It’s precise, well-crafted and simply elegant, super-easy to integrate into a ton of different genres…I can’t say enough good things about this adventure. It’s a real gem.

Anyways, rating-wise, I have to rate the issue as a whole, and while it is one of my favorite installments of the whole ‘zine, as a whole, it falls slightly short of getting my seal of approval, with more articles falling into the “good, but not great”-range. Still, I highly recommend picking this one up – $2.50 is a true steal for the content herein. Hence, my final verdict will be 5 stars, in spite of a few rough patches here and there.