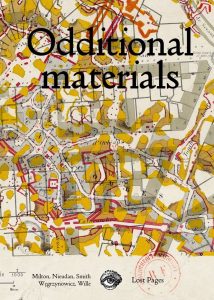 This collection of supplemental materials and hacks for Into the Odd comes as a 39-page pdf, 1 page of which is devoted to the editorial; the rest is content, as the cover and wrap-around cover are presented as .jpgs. The pages, as most of the time for OSR-type supplements, are laid out in 6’’ by 9’’ (A5), though printing multiple pages on a single sheet of paper is not recommended here: The pages have pretty wide borders for map-excerpts, commentary, supplemental information or the like – or some white space. The exception here would be the final hack within, which is really making use of its allotted space, cramming a TON of information onto the page.

The first of these hack, “Odd Dungeons”s could be described as a blend of Into the Odd with more traditional OSR-games, such as B/X; Eric Nieudan provides a surprisingly concise and well-thought out tweak that basically replaces arcana with traditional spells, which may be coaxed into new shapes akin to how you can use Willpower to modify arcana effects. Otherwise, each spell may be cast once, which makes this iteration pretty open regarding synergy with Mageblade Zero, Adventure Fantasy Game, or any kind of longform spell you may happen to enjoy. Of course, the inclusion of spells does mean that levels matter more, healing spells and how they interact with Hit Points and Strength damage need to be accounted for – and the supplement does all of that. An alternate background table to account for the different premises is included, and sidebars quickly note the benefits of non-human races – these are kept mostly narrative. A d20-table for replacement PCs/latecomers and a d6 table to learn about what happened to your belongings while out there complements this one. The hack also includes a one-page, rather nice faction generator, where you determine origin, status, means and goals and also get a table for peculiarities. All in all, an interesting hack for the slightly more experienced crowd. Still, enjoyable – but there also is “Maze Rats”…see below.

The second hack, penned by Sean Smith, would be “Cyber:London:Odd:Hack”; in fact, this one is actually two variants of sorts; the first of these would be the default mode, dubbed “Slick Thames”, where you choose a faction (Goths, punks, hoods, corps); the attributes have been reskinned, and Hit Points now are called Nerve; the background table is a bit brief this time around; it’d have been nice to get one for each faction, but that may be me. The hack comes with 12 tactical augments, basically the cybertech equivalent of arcana, minus the coaxing. 12 cosmetic augments are provided, and there are 6 adventure hooks depicting missions; the table here erroneously noted “d12” instead of “d6” as the die to roll. The second playing mode would be the police, whose attributes, oddly, get different names, in spite of otherwise sharing quite a few rules components with the previous one. Low HP may yield psychic powers, low attributes special abilities. A few sample items and notes on advancement for the police are provided, and we get a bit refereeing advice, as well as 4 sample criminals. There is a truth to the cliché that Germans love their cyberpunk – I certainly do as a long-time Shadowrun player. That being said, a lot of cyberpunk’s draw comes from the world, and while I appreciate the Judge Dredd police playstyle, I really found myself wishing that this had more space to develop its ideas. There are quite a few tweaks to the engine that are interesting, while renaming attributes, in comparison, just takes up real estate. I’d enjoy a proper, fully-fleshed out version of this hack. As provided, it leaves something to be desired regarding the fulfillment of its tantalizing ideas and is probably a reskin that most referees could execute themselves.

The, at least to me, most impressive of the hack within, in scope, ambition and execution, would be Ben Milton’s “Maze Rats”; the game is basically a more traditional fantasy tweak of the rules of Into the Odd, supported by TABLES GALORE. I mean it. You immediately see the start of this hack, as suddenly, the pages are CRAMMED full of information, with names, personalities, differentiated weapons, appearance and adventuring gear generators, etc. I really love this hack. It codifies short rests, has a precise initiative, a simple XP-system and 11 classes that are just one sentence and still offer meaningful ability differentiation. The magic system is inspired for a rules lite game: Magic is grouped in 5 circles; these designate damage caused, range, etc. in a precise and helpful manner; oh, and you build spells via 3 100-entry-strong tables; One denotes [effects], one [elements], one [form] – this is absolutely GLORIOUS. It’s a kind of freeform that allows for serious creative freedom, while still providing a solid rules-chassis that makes sure spellcasting does not become competitive BSing. Creatures, items and afflictions and even weird potion effects get their own, massive entries. I ADORE this one. “Maze Rats” cleans up a couple of the issues of “Into the Odd” and does so with panache aplomb. This is a prime example of how damn good a hack can be, and I’d honestly consider this hack to be required reading for Into the Odd referees. Mechanically, this is easily the strongest part of this book and warrants getting it on its own!

Now, this constitutes the hacks that are included within – beyond these, however, we have a couple of “odds and ends,” if you will: Brian Wille presents 4 new arcana for our edification, which include a magnetic, projectile-deflecting chapeau (heck yeah!), a massive plasma gun, a mechanized arachnid (stats included) and a device to animate the dead as a fighting force. Once more, stats are included. Kamil Węgrzynowicz also has a section of such oddities, presenting two genuinely creepy, fully statted monsters: The pretty nasty owlpeople and screaming pyrmaids of pulsating flesh, as well as an ancient sludge that can transform those it touches – I loved these critters! The article also mentions an area of Bastion that phased out of the world, only to randomly reappear…and there is this potentially addictive building. Oh, and oath-enhancing stones? Pretty nasty. Now, I’m not trying to be a dick here, but the editor’s note that claims that not tampering with the text too much was done to retain the author’s voice feels like a bad excuse. I absolutely adore Kamil’s contributions here, but a few editing tweaks versus plural errors and the like would not have compromised the integrity of the awesome concepts and prose, particularly in the adventure.

Adventure? Yep, this booklet also contains two adventures/explorable locations, with Kamil Węgrzynowicz’s “In Search Of Samson Aubrey” being the first of these, and it really gets the subtle tone of the industrial-revolution-plus-weird-themes of “into the Odd” and represents a nice little adventure, though, as noted, editing would have made it potentially even great. The second adventure, penned by Eric Nieudan, would be the “Nightlight Circus”, which pits the PCs against a new gang operating a gambling den, one that has a distinct Joker-esque style, though they do seem to be remarkably benign… This one’s another winner. And no, I’m not going into the details here – the pdf is PWYW, after all, so you can read those yourself. Both come with maps, but sans player-friendly versions of the maps.

Editing and formatting are one of the weakest parts of this book; a more unified direction would have made sense. Layout adheres either to a one-column or two-column (Maze Rats) standard and is pretty much no-frills b/w. Cartography is b/w and okay. Annoyingly, the electronic version has no bookmarks. The softcover PoD is really inexpensive, though, so getting it may be a smart move if you enjoy the content. I have the PoD and found it easier to navigate than the pdf.

Ben Milton, Kamil Węgrzynowicz, Eric Nieudan, Brian Wille and Sean Smith have created a fun book of bits and pieces that can really enrich your Into the Odd game – mechanically, the Maze Rats hack is super-interesting and inspiring, and the arcana ideas and Kamil’s monsters in particular made me smile. The adventures are a nice plus as well. That being said, don’t expect Lost Pages’ usual level of polish here; this is a bonus booklet of sorts, and while offering it for PWYW certainly makes it worth getting, I do think that, with a bit more attention to detail, this could have been truly great. As written, I consider the totality of this book to be worth a verdict of 3.5 stars, rounded up.

You can get this file for PWYW (or print!) here on OBS!