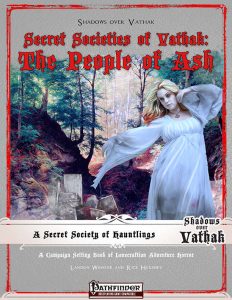 This supplement depicting one of Vathak’s secret organizations clocks in at 12 pages, 1 page front cover, 1 page editorial, 1 page ToC, 1 page SRD, leaving us with 8 pages of content, so let’s take a look!

The huantlings of Vathak that believe that they have been granted their strange state of existence by virtue of fire hold the grimoires The Litany of Ashes in particularly high regards, searching for purpose in the book as well as the fragmented memories of their fire-stained past. Those that follow this creed of fire and ash are known as the People of Ash, and as such, the organization itself mirrors the diverse social realities of Vathak, with conflict, in spite of the lax unifying rules of the informal society, being scarce.

The pdf then proceeds to depict the three locations that are most known as gathering places for the People of Ash, depicting the locations in vivid, captivating prose. Following this presentation, three leaders of the society, Grandmother Bellace, Sarkara and The Foreman are depicted in flowery, well-crafted prose – no full stats are provided for these, but we do get write-ups that do grease the engines of the GM’s imagination. These NPC write-ups are indeed intriguing, and we do get 3 further fluff-only write-ups of further members that add further complications and angles to the material presented within.

The next section familiarizes us with the tenets and truths behind the beliefs of this society, which focuses often upon the realization of the hauntling condition, and a focus on the tempering of the body/mind, as ostensibly, only the strongest souls can make the transition, which adds an elite-thinking angle to the organization. The initiation rites of the society are presented, and as far as benefits beyond roleplaying are concerned, 5 feats can be found: Tempered Soul allows you to throw off mind-affecting effects for untyped damage that may not be cheesed; Fire’s Tempering builds on that in an interesting manner; Grace of Fire’s Fury is a torch-fighter’s feat and Graceful Brand lets you use fire to end bleed effects, building on it. Rekindle Soul can make fire have restorative effects while your hp is below 0 – and yes, it has a limit to prevent abuse. Nice one! The pdf concludes with 3 well-written adventure hooks.

Editing and formatting are very good on a formal and rules-language level. Layout adheres to a beautiful 2-column full-color standard and the pdf sports really nice full color artworks – impressive for the low price point asked! The pdf comes fully bookmarked, in spite of its brevity – kudos for going the extra mile!

Landon Winkler can craft compelling prose – The People of Ash are a cool secret society and sport some compelling, exciting angles to pursue. The feats are gold for grittier campaigns and retain their meaningful effects. That being said, I did wish we got some stats for the cool leaders of the society. That being said, at a paltry $1.50, this is definitely worth getting. A really nice supplement, well worthy of a final verdict of 4 stars.

If you missed it, you can find the excellent hauntlings racial guide here!