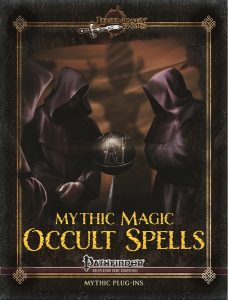 We begin this mythic upgrade for the glorious occult spells with an alphabetic list of the spells, including hyperlinks, before going into the spell descriptions. The upgrades of the respective occult spells to mythic levels of power follow by now well-established standards – analyze aura allows for instant information on auras, for example. Apport Animal increases the distance it can travel and extends the target creatures to Small or smaller animals. The mythic iteration of bilocation allows for the 5th tier augment to increase the action array available at the character’s disposal.

The more unique spells also feature some interesting tricks – create mindscape lets you choose slow or rapid time, interacting well with the cool concept. Mindscapes can also be detected with the respective spell through divination-blocking effects. Longer durations, increased chances of getting useful information via grave words…some solid upgrades here. Mythic mind swap‘s allows for decreased duration self-bind after a swap and then reverse the swap at a moment’s notice, adding a cool tactical dimension to the spell. Better object possession and possessing objects that kill you reflexively feel frickin’ occult and damn cool!

Remaining only stunned while using psychic image, using psychic surgery to aid in retraining…very cool. One of my favorites, though, would be withdraw affliction, now with the option to hold the affliction in your hand and hurl it at foes…or use mythic power to make them traps or use them more often, spreading curses. Absolutely glorious!

Editing and formatting are top-notch, I noticed no significant glitches herein. Layout adheres to Legendary Games’ two-column full-color standard and features some nice full-color pieces of artwork, though fans of Legendary Games will know a couple of them from previous publications. The pdf comes fully bookmarked for your convenience.

Jason Nelson, Amanda Hamon Kunz and Jonathan H. Keith deliver a more than solid take on mythic, occult spellcasting – formally, there is not much to complain here, particularly considering the increased difficulty of designing both with occult and mythic spells. I am a huge fan of Occult Adventures as a book, as you may have noticed – I love the aesthetics, rules, focus – everything about this book is awesome in one way or another. If anything, my only gripe with this pdf is that I would have loved this pdf to make slightly more use of the unique ideas of the hardcover. That being said, there is genius and evocative material herein alongside more conventional designs. My final verdict hence will clock in at 5 stars.