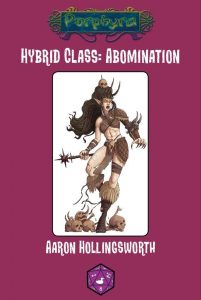 This hybrid class clocks in at 25 pages, 1 page front cover, 1 page editorial, 2 pages of SRD, leaving us with 21 pages of content. It should be noted that the text is laid-out for digest/booklet-size (A5/6’’ by 9’’).

The abomination as depicted herein would be a hybrid of unchained barbarian and unchained summoner. The class gains d12 HD, 4 + Int skills per level, full BAB-progression, good Fort- and Ref-saves and a natural armor bonus that increases from +0 at 1st level to +8 at 20th level. The abomination only gains proficiency with two simple weapons of his choice as well as with light armor.

Spellcasting is handled via SPs – the abomination begins play with a spell-like ability drawn from the unchained summoner’s spell-list. At 4th level, 6th level and every 3 levels thereafter, the abomination receives an additional spell-like ability. Restriction-wise, the abomination’s class level must be at least twice the spell level to be selected as SP to make it eligible – it thus takes 6 class levels to choose a 3rd level SP. These SPs are governed by Charisma and may be employed 3/day; exception to this rule would be 0-level SPs – such SPs can instead be used at-will. Now, summoner spells often influence eidolons in specific way – in a nice bit of service, these spells don’t just fall by the wayside; instead, we cover a couple of them, highlighting how they interact and work – life conduit, for example, can be rather risky. Still, I actually liked this aspect about the presentation of the class – it shows care.

Now, unsurprisingly, the abomination also gains an evolution pool: We start with 1 point and increase that to up to 8. These evolutions are per se fixed, but may be changed upon gaining a level or by being transmogrify-d. The abomination does receive a rage-variant, the rampage. This one can be maintained for 4 + Constitution modifier rounds, +2 per class level. Temporary increases in Con do not grant additional rounds. The abomination gains +1 to Atk with melee attacks, +1 to melee and thrown weapon damage rolls and Will-saves, as well as -1 AC and 1 temporary hit point per HD. After a rampage, the abomination is shaken and the ability is treated as rage for the purpose of prerequisites, etc. Now personally, I would have loved to see a caveat that precludes characters immune to the shaken condition for rampage-cycling here. On the plus-side: The 17th level ability eliminates the shaken-cooldown, but does not yield temporary hit points again if trying to re-enter the rampage before 1 minute has elapsed. The bonuses rampage grants are upgraded to +2 and 2 temporary hit points per HD at 11th level, +3 and 3 temporary hit points per HD at 20th level.

Now thankfully, the abomination does not gain free access to all evolutions – instead, the class gets its own custom list, which thankfully do clarify the respective natural weapon interaction. That being said, there is a bit of an oversight, convenience-wise: the natural attacks tend to list their damage values for Large abominations – but not for Small ones. Probably a heritage issue left over from the eidolon-translation. Not a big deal, but inconvenient nonetheless. Big plus among the 1-point evolutions: They don’t break game-assumptions à la low level personal flight etc.; on the downside, there are a couple of choices that can be a bit weird in play: It is, for example, possible to give yourself pincers…but RAW, you don’t have issues tying your laces, holding those lockpicks – you get the idea. It’s not a big issue, mind you: As Limbs is a 2-point evolution, you can easily do the glabrezu and have a second pair of pincer arms (no, you don’t get additional attacks), but yeah – there are a couple of evolutions, where a bit more PC (as opposed to pet-function)-functionality/explanation would have been cool.

Know how I commented on how the 1-point evolutions don’t break low-level assumptions? Well, it is my pleasure to report that both e.g. elemental bonus damage and unassisted flight are locked behind 5th level; similarly, the powerful rake and rend options are locked behind 4th and 6th level, respectively. The nature of the natural attacks required for them further provide limiting factors here. Nice: The 3-pt.-evolutions include e.g. Wisdom damage causing consciousness (with sanity alternatives for Horror Adventures!); infinite, but slow fast healing is locked behind 11th level – not the biggest fan there, but yeah.

It should also be noted that 8th level nets a monster feat – the abomination must meet the prerequisites, thankfully, but may choose to lose and replace this feat upon gaining a new level. The pdf also provides new feats: +4 rounds of rampage, +1 evolution pool (which may be taken more often, with 5th level and every 5 levels thereafter as extended prereqs). The monster feats provided, Aberrant Creature and Determined Spell-like Ability, both made me cringe a bit – the latter lets you roll 1d20 upon using a SP – on a 15+, you don’t expend it, with 8th level and every 4 levels thereafter yielding you a +1 bonus to the roll. Yeah, I wouldn’t allow that anywhere close to player hands. Aberrant Creature sports this gem “You are now classified as aberrant in creature type.“ as part of its rules-text. Rules-language, this is not, young padawan.

The pdf does contain one archetype, the mire champion, who gains bonus languages, adds Knowledge (nature) to the list of class skills and draw their spells from the druid spell list, using the unchained summoner spells known charts. The archetype sports this puzzling sentence “Mire champions gain bonus spells and adjust saving throws using their Wisdom score and its modifiers. They are thus classified as ‘spontaneous casters’“ – that’s not how you designate prepared or spontaneous spellcasters; the saving throw bit is confusing at best and, newsflash, Wisdom-based casters are more often prepared spellcasters than spontaneous ones. Just as an aesthetic aside. The whole defensive array of abilities is replaces with fast healing while in contact with soil (sans limits – urgh, but works only sans armor) and the archetype replaces the 8th level monster feat with constant speak with plants. Not a fan of this archetype – it feels rushed in more ways than one.

We get a metric ton of favored class options for Porphyran races, which is pretty neat – however, the +1/4 evolution pool options are significantly better than the others; I am also not the biggest fan of the crit-confirmation-boosts with natural weapons, though at least the non-stacking caveat with Critical Focus there does help a bit.

The pdf comes with a nice little bonus file – the Dragon mite, penned by Perry Fehr, which represents a CR 1/3 Diminutive vermin that infest dragons! Yep, dragon parasites! The cranky dragon actually has a reason to recruit the PCs, as they delouse the creature from its potent, energy-blasting mites! Oh, and guess what? We get a cool dinosaur variant as well. These don’t have the energy shenanigans, but do inflict salmonella…ew!

Editing and formatting are very good on a formal level – the rules-language, for the most part, is concise and clean; while I would have liked to see a couple more prereqs/interaction elaborations here and there, the presentation per se is solid. Layout adheres to Purple Duck Games’ 1-column standard, is printer-friendly and comes with purple highlights. The artworks for the class and the bonus critter are in full-color and rather neat. The pdf, strangely, doesn’t sport bookmarks, which represents a minor comfort detriment.

I enjoyed Aaron Hollingworth’s abomination more than I thought I would. I have seen quite a few evolution-based shifter-classes and this one’s focus is sufficiently distinct to make it stand out…a bit. You see, this may just be me, but after having played Darkest Dungeon, I did kinda hope that this would be a two-mode class; you know, with rampage tying in with the evolutions. As written, the components of the class, while not bad, are pretty static. It would have imho been more interesting to provide ability suite a) in normal mode, ability suite b) in rampage mode. But that’s just an opinion and will not influence the final verdict. Similarly, I think that going full-blown horror-adventures with the fear-rules, sanity etc. could have yielded a thoroughly compelling, unique engine here, one that would have set the class more distinctly apart from its brethren.

What will influence it, though, would be the sudden drop in rules-language integrity when it comes to archetype and feats, which frankly struck me as puzzling. That being said, the damn cool bonus critter does make up for those shortcomings, at least to an extent. Hence, my final verdict will clock in at 3.5 stars, rounded up due to in dubio pro reo.

You can get this nice hybrid here on OBS!