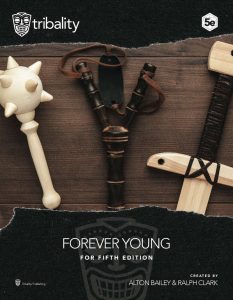 This brief pdf clocks in at 8 pages, 1 page front cover, 1 page SRD, leaving us with 6 pages of content, so let’s take a look!

So, there is some merit to playing kids. For one, if your players ARE kids, it may make sense to start playing as kids and then transition to adult adventurers after e.g. a “formative” adventure in youth; similarly, adult adventurers turned into kids can be a nice change of pace. In PFRPG, the massive toolkit “Childhood Adventures” makes for a great way to depict all the eventualities, but at least to my knowledge, no such toolkit exists for 5e…apart from this one.

Now, before we start, it should be noted that the focus here is strictly on the “start playing as kids”/formative adventure-angle; everything beyond that is beyond the scope of this pdf. It costs $1.00. What did you expect?

So, how does this pdf go about codifying kids? We begin with a child creation outline: The book knows three age categories: Infant (which you won’t play), young child and adolescent. The pdf recommends point buy for stats and advises to not have a kid buy a stat higher than 12 before modifications: Young children get 7 points, adolescents 14. Alternatively, one ability score array for young children and adolescents can be found.

Children, as depicted here, do not have a class. Instead, they have 4 + Con/racial modifier hit points, AC 10+ Dex-mod, initiative 0 + Dex mad and saves equal to 0 + related ability/racial modifiers. Human and elven kids have a speed of 20 feet, dwarves 15 ft. Okay, I *assume* that, analogue, Halflings and Gnomes also should have a 15 ft. speed, while half-orcs, tieflings etc. also have a speed of 20 ft. – unfortunately, the pdf needs you to extrapolate these values – slightly inconvenient. Now, granted, the pdf does clarify that later, but not in the first summary of the basics.

We do get a big adjusted height and weight-table, which is nice. The pdf then proceeds to list universal child adjustments: This notes “Speed: 10 ft.” – considering the formula, I am pretty sure a minus is missing here. Darkvision is halved for young children, while adolescents get full darkvision. Language-wise, young kids get the racial tongue, adolescents a secondary language. Young children have no proficiency bonus, while adolescents have a +1 proficiency bonus. Dragonborn are a special case – they get their draconic ancestry and damage resistance as the adult. Their breath weapon comes in two versions. Weird: Young children have a 1d4-2 5 ft.-range breath weapon that recharges every 1d6 minutes. I get the flame-burp-joke, but since that’s less than at higher age…it felt weird to me.

A handy table lists the racial stat bonuses for young children (usually one +2 and one +1; exceptions: Half-elf gains +1 to any three, humans +2 to one stat – though these gain +1 proficiency bonus) and abilities based on race: Lightfoot Halflings get lucky and naturally stealthy, for example. The second table lists them for adolescents – all races get +1 to all stats and some further abilities. Now, here is something that’s a bit weird. Some young children gain proficiency bonus +1; adolescents gain proficiency bonus +1. It feels strange to me that their advantage in development is lost upon reaching adulthood. The pdf does provide some general notion of the idea of playing kids long-term, suggesting 2 to 3 ability score gains per level. We close with stats for rats and spiders – challenge 0 threats that net 10 XP.

Editing and formatting are good; while I noticed a few aesthetic hiccups like missing blank spaces and dots, nothing serious. Layout adheres to Tribality Publishing’s nice two-column full-color standard with photographs of toys etc. as artwork – works rather nicely! The pdf has no bookmarks, which, at this brief length, constitutes a minor comfort-detriment.

Alton Bailey and Ralph Clark have provided an unpretentious, handy little booklet. It doesn’t reinvent the wheel, it doesn’t provide a massive, exhaustive campaign toolkit, but it works rather well for its intended purpose – if you e.g. want to go a route similar to “Tales of Graces F” and start with childhood hijinxs, then this should have you covered. For the low and fair price point, this is worth checking out. My final verdict will clock in at 4 stars.