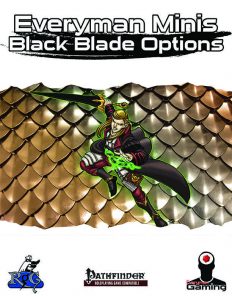 This Everyman Mini clocks in at 11 pages, 1 page front cover, 1 page editorial, 5 pages of SRD, 1 page advertisement, leaving us with 3 pages of content, so let’s take a look!

So, what do the options herein do? Basically, we get archetypes that modify the black blade (a deservedly popular choice) gained by e.g. the bladebound magus archetype. Since they are archetypes, they must be taken as whole packages – analogue to regular archetypes, there’ll be no cherry-picking here.

Okay, so, before we take a look at the archetypes in question, it should be noted that the pdf also sports two new magus arcana: Black Blade Endowment lets the magus spend points from his black blade’s arcane pool to add a selection of special weapon properties to the black blade. This consumes an amount of bonus equal to the property’s base price modifier. The bonuses persist for as long as you don’t reuse the ability. Okay, I am pretty sure that a line went missing at one point: As written, it looks like the ability consumes the black blade’s enhancement bonus temporarily, acting as a cap to e.g. prevent low-level vorpal, which is good – however, the arcana fails to note how much arcane points the enhancement costs. I assume that the cost in arcana points is equal to the base price modifier of the properties. But then again, is it intentional that you could recover the arcane pool points while retaining your current, favored combination? The arcana should really spell out not only that you need to spend points (it does that), but also how many. Oookay, number 2 would be Learned Blade, which nets you Breadth of Knowledge while wielding the blade.

The pdf contains a total of 3 different black blade archetypes – the first would be the ancestral blade, who gets mental attributes equal to 10 +1/2 the magus’s level, with an ego of 10 at 3rd level that increases by 3 every 3 levels thereafter. These blades gain 2 skill points per HD of the magus and treat skills based on the mental attributes as class skills. It may only use them within its given sense-reach. However, the magus determines the enhancement bonus at -3 levels. Below 2nd level or less, the magus may not apply the enhancement bonus on weapon damage rolls. At 5th level, the blade’s senses reach to 30 ft. with both low-light and darkvision. 9th level extends that to 60 ft. and grants the ability to speak and understand all the magus’s languages. 13th level increases this by a further +30 ft. and adds read magic; 17th by a further 30 ft. – and also unlocks blindsense 30 ft. This replaces energy attunement.

The second archetype would be the dragonsoul blade – you choose one dragon from a massive table that includes esoteric, primal, imperial and outer dragons alongside the classics. This determines the damage type that the altered energy attunement works with: At 5th level, the magus can spend 1 point from his blade’s arcane pool to alter the damage of the blade to the type associated with the dragon. No, umbral dragon based blades, who gain negative energy, cannot heal undead by whacking them – nice catch! The dragon chosen also determines the 13th level ability – the magus can point the blade at a foe to generate a breath weapon of sorts for 1 arcane point from the blade’s pool, with a 1d4 cooldown. This replaces transfer arcana. 19th level yields a 1/day form of the (exotic/alien) dragon III with additional uses costing 3 points – minor complaint: While it’s easy to default to a standard action for the Su, it would have been cleaner if the ability stated its activation action. This replaces life drinker.

The final one would be the levialogian blade (after the amazing monsters introduced in Paranormal Adventures), who must be evil. The blade is hungry, and to gain any powers from it, the master must feed it the equivalent of 1 point of Constitution damage of his body’s flesh per day. The blade has 3 + its Int-mod arcane pool points and at 3rd level, is symbiotically linked to the magus. As a swift action, the magus may sheathe his blade in his own body. He may similarly draw it quickly and somewhat grotesquely. Losing the blade lets the magus regrow it in a special ritual. This replaces unbreakable and Alertness. At 5th level, as a free action, the magus can spend a point from his blade’s pool to cause it to erupt in screaming, gnashing maws – think “Soul Edge.” This Makes the weapon cause bludgeoning, piercing and slashing damage and ignore DR and hardness for the attack. If used to sunder, this adds +1 to the sunder check for every 3 magus levels of the wielder. This effect only applies to the next attack made or until the end of the magus’ turn. Love the visuals here, but don’t like the DR/hardness-ignoring – a scaling decrease of the two would have imho been more elegant. Instead of teleport blade, 9th level allows the magus to spend 1 point of the levialogian blade’s pool to change its weapon type as though it was a transformative weapon – any light or one-handed weapon is game, even bludgeoning weapons.

Editing and formatting are very good on a formal level; on a rules-language level, a couple of minor hiccups have crept into the designs here. Layout adheres to Everyman gaming’s two-column full-color standard and is pretty printer-friendly. The artwork featured is nice and, as always, the pdf has no bookmarks, but needs none at this length.

I really adore the visuals and concepts of 2 of the three archetypes herein – and the third one is nice as well. I really like the customization options they offer. At the same time, I did stumble over one minor oversight and one bigger, rules-relevant hiccup and I’m not perfectly sold on the blade of maws’ DR/hardness-ignoring properties. Still, in spite of these complaints, I consider Alexander Augunas’ black blade options well worth checking out – they are unique and pretty cool – dragonsoul and levialogian blade in particular just beg to be used as high-concept options. In the end, my final verdict will hence clock in at 4 stars.

You can get these variant black blades here on OBS!