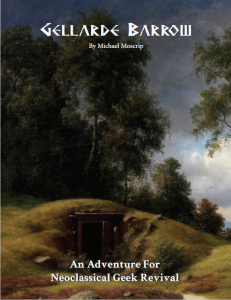 This review was requested as a prioritized review by one my supporters via direct donation, and also as a regular request by one of my patreon supporters.

This module contains two different spells: Craft barrow guardian (based on Simulacrum) and barrow hex (based on Trigger & Summon), both focusing on making guardians for barrows. The module also includes a really cool treasure, the mallet of Gellminster, a carpenter’s mallet that can be used to drive sharp objects into pretty much anything: Nail ghosts to walls, etc. Cool concepts! But: its rules are opaque. It will “strike more heavily than an ordinary mallet” (okay, what effect does this have?), and it e.g. doesn’t note how actually nailing critters to objects works rules-wise.

The module comes with a brief random encounter table and sports no read-aloud text.

The module is a barrow crawl for low-level/relatively new parties, and as far as the unique things that set NGR apart go, it doesn’t utilize many of those, feeling very much like a conventional OSR-module. In spite of this, it is one of the harder modules for both players and GMs to execute.

In order to talk about why will require that we go into SPOILERS. Potential players should jump ahead to the conclusion.

Okay, only GMs around? Great! So, the PCs are about to explore the barrow of fabled Luc Gallarde, who was rumored to be capable of duplicating anything that can be made of wood in other media, like stone. Note that this is true: In the very first room, a chair (constructed as one would make a wooden chair) of marble can be found. Cool! It weighs 150 pounds, nice, this’ll make it hard to get to safety for the party! Problem-solving ftw.! …wait. It’s valuable, right? The module says as much. Then why doesn’t it list a, you know, actual value? This problem in the details isn’t the only one, but it illustrates one of the weaknesses of the module.

As far as strengths are concerned, we have a few as well: Beyond bandits in one room, we also have a dangerous hipposteus that can be outmaneuvered by a clever party (if they read the signs well) – and one room is particularly interesting: At the top level, there’s a walkway blocked by pallid, white roots that crosses a larger hall; these roots attack and regrow pretty quickly, but not too quickly. Below, we have the biggest room of the dungeon, including a stationary root monster thing that not only can be outmaneuvered by clever PCs (to at least stay out of melee range), it also throws curled up trilobites (!!) as ammo. That is AWESOME. Seriously, two thumbs up. This creature, alas, also serves as a good way to illustrate that the module isn’t always consistent in how it rewards the players: That hallway with the roots reaching up? If the party takes the time and clears out all the roots, the monster below will fall to the floor. Does it suffer in any way, shape or form from this? NO. In fact, it gets tougher, because now it’s angry and mobile. Granted, bypassing the roots in the corridor above may be the smartest move, but penalizing wanting to deal with the monster in a clever manner strikes me as counterproductive. Taking potshots at it while it’s rooted is much more efficient. I was also surprised to note that it *can* unroot, because the regular write-up doesn’t imply that, with its limited mobility/can’t reach PCs that stick to the walls angle.

The second part of the module that makes it kinda tough, is that the barrow has essentially three levels crammed on one map, and a gimmick where two levers allow the party to flood the barrow to a degree. This process is pretty much a question of trial and error (there are only two levers, so that is somewhat valid), but since they seem to lock in place until the water has reached the new level, it can be a bit weird. Anyhow, it would have been *REALLY HELPFUL* if the individual regions that can be flooded actually noted some sort of shading on the map. Granted, each room that can be flooded notes its differences in the flooded state, but yeah. Considering how simple the actual module is regarding its set up, I shouldn’t have to make notes and reread the module and puzzle that sort of thing together. It’s not that it isn’t there, it’s just that it’s inconvenient.

The aforementioned mallet, btw., was used by a tomb robber to nail a shadow thing to the wall as he lay dying. The shadow thing, obviously, can’t be trusted, but tries to get the party to free it. And no, there are still no rules for nailing enemies to solid objects – or how to get, you know, out if you’re nailed to an object.

Editing and formatting are okay on a formal and rules language level; I noticed a couple of hiccups. Layout adheres to a 2-column no-frills b/w-standard, and the pdf uses some nice stock art. The b/w-maps by Dyson Logos are really neat, but I wish there was an unlabeled, player-friendly version, or even better, a proper jpg for VTT-use. None is provided. The pdf has no bookmarks.

Michael Moscrip’s Gellarde Barrow does a lot right; it has a cool item premise in line with Zzarchov’s aesthetics, and when he gets things right (like the ranged attacks of that one monster), he does so rather well. However, at the same time, the complex doesn’t really live up to the cool “I can nail ANYTHING together”-premise. I mean, picture what you could have done with that!! Instead, we get a pretty solid, if inconvenient little dungeon crawl. The whole water/flooding premise, ultimately, is underutilized as well – you could have made some seriously cool puzzles with that, influence and redefine how one or more combats operate, etc. There is a ton of promise here, but as a whole, much of the promise is not realized properly. This also holds true regarding all the possibilities NGR offers in contrast to other old-school systems; the game has so much more to offer than what’s on display here.

As a PWYW-offering, this is worth checking out, I guess, but in contrast to the other OSR/NGR-compatible adventures, it falls a bit flat. My final verdict will be 3 stars.

Do you enjoy NGR as much as I do? Then you might want to consider supporting Zzarchov Kowolski’s patreon here.