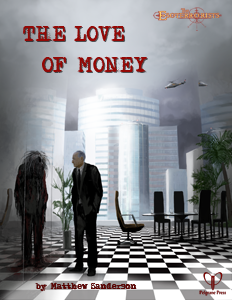 This massive adventure for The Esoterrorists clocks in at 111 pages, 107 if you take away editorial, etc.

This review is based on the print copy of the module. I do not have access to the electronic version.

Okay, so the first thing you have to know about this massive adventure would be that it is pretty hard to integrate into an ongoing campaign, working best if you have a couple of months to set up the proceedings. Otherwise, it may make sense to play this as a one-shot with the supplied pregenerated characters – 6 of these are provided, with detailed motivations and notes for the players to establish their relationship to their team-mates and the NPCs featured herein, in particular a specific one, but more on that later.

For the GM’s convenience, we actually get a handy table that sums up team-skills by category, providing all you need to know on one page – really comfortable and nice to have! It should also be noted that this module is really great when it comes to hand-outs – no less than 12 have been provided, ranging from photographs to strange scribbling, puzzle clues and images of ODEs, I was positively surprised by the amount of neat supplemental material featured here – including brief suspect profiles etc.

Speaking of ODEs – the module does feature a new ODE, the so-called spectrosite and provides a full write-up with stats, limitations, theories, etc. Genre-wise, its hould be noted that this is an adventure for SMART players – it has two rather unforgiving bottlenecks and if you’re new to investigative roleplaying, you may want to elect for something easier. That being said, this is a nice challenge for those of us who enjoy challenging modules that require some brainpower to solve. It should be noted that this module is not particularly gory or combat-centric, being more about psychological horror and personal tragedy.

All right, and this is about as far as I can go without going into serious SPOILERS. Potential players should jump to the conclusion.

All right. Psychological breakdowns are responsible for most OV-agents being retired. When John Sheldon and his sister were recruited into the OV, things went well for a while – John was brilliant and he championed the operation that gives this module its name: Operation 610, after Timothy 6: 10 – “For the Love of Money is the Root of All Evil.” – he figured he had found a way to deal a crippling blow to Esoterrorism by destroying their financially backing, but it hinged on using a lone operative, him – something the OV generally does not condone, for good reasons. Frustration built up.

Then, one winter’s night, his obsession rising, his sister and wife wanted to take his mind off things – all drinking. Caroline took her brother’s car keys and drove home, being the most sober of the 3…and then, in the rear-view mirror, the spectrosite, an ODE hiding in reflective surfaces like mirrors, showed itself – just long enough to make the car crash. John was inconsolable and severed all ties with his sister (who is btw. one of the pregens – see what I meant with “hard to integrate into an ongoing campaign?”). He had nothing left to lose. He initiated his plans for T610.

Traveling to Europe, he managed to infiltrate Métallon Incorporated, which is led by industrial giant Johan van der Hulst, who has been an Esoterrorist for most of his life, guided by his invisible play mate Nicholaus (who shows up in mirrors…) into the murder of, among others, his parents. He is deeply convinced of his twisted cause – and he has been gathering Rhodium, for Nicholaus has told him about a means of tearing the membrane temporarily.

It should come as no surprise that Hulst knew of Sheldon’s plan. Nicholaus poses as Mary in the mirror, twisting Sheldon’s already strained psyche further, convincing him that she’s trapped in the Outer Dark, that he must free her – and that Hulst would know how. Hulst has a device, but it does require a willing sacrifice – it would not end Sheldon, but it would “reunite” him with his wife…but to bring both him and her back, someone else would need to take their place in the Outer Dark…and it only took a bit of gaslighting to convince the embittered operative to blame the OV.

Sheldon allowed himself to be ritually slaughtered, fusing his heart with the Rhodium-device crafted by Hulst. He is waiting the right circumstances.

Meanwhile, the PCs have all been considered to be potentially compromised by Sheldon dropping off the grid and are thus sent to Amsterdam to investigate the proceedings, fitted with heart-monitors and surveyed by psychiatric metrics…and an SSF team may well be waiting in the wings…The briefing is btw- fully detailed and a nice flow-chart of potential adventure scenarios and sequences of scenes has been provided. The PCs thus travel to Amsterdam to not only get to the bottom of the matter, but also to clear their name: And they will have to contend with a rather grisly scene, namely that of Sheldon’s demise, carefully orchestrated to draw the agents ever closer into the proceedings – Veil Out of a potential witness’s gruesome death at the hands of the spectrosite, right in the police station, will require some serious creativity and quick thinking.

Indeed, things become even more complicated pretty fast: Beyond the professional killers and snipers under Hulst’s command, a rival Esoterrorist and former subordinate of Hulst tries to eliminate the PCs – with methods that are not exactly subtle. However, at the same time, this involvement may actually put stumped PCs on the right track! You see, there is a component that explains WHY Sheldon’s murder was staged this publicly – the heart, extracted from his body, needs to be activated…and for that, it requires bloodshed by his enemies, the OV.

This adds a great moral dimension to the proceedings, as the agents may be required to race the SSF…if they are not duped by “Mary” as well and survive potential encounters with the spectrosite…and it emphasizes that the OV agents are supposed to be the good guys. That being said, in one way or another, the heart will *probably* be activated…but Verity’s order remains: Get the head of the conspiracy. Hulst has the device on an oil rig, which is represented, image-wise, with a nice hand-out, yes, but it (and pretty much all of the action-oriented scenes) imho suffer from a lack of maps – in the case of the rig and the scenario, where the Esoterrorists try to dupe the PCs and the SSF to spill their blood in particular – these scenes could have really used some proper maps.

The approach to the oil-rig, btw., features the most brutal of bottlenecks in the scenario: If the PCs have botched their investigation, they may be shot out of the air by the surface-to-air-missiles installed on it via Hulst’s fortune and black market connections…unless they have found the proper coded MP3 to call off the automated attack, this may well be “Game Over”. The running gun battle through the rig feels like an afterthought, when set against the possible outcomes of the scenario – and while partial success is at least somewhat likely, stopping Sheldon’s tormented soul and succeeding at the veil out without a horrid, horrid gaze at the abyss of the Outer Dark will be only something truly smart (and compassionate) players will succeed in.

Editing and formatting are good, but not as good as usual for Pelgrane Press – my copy did sport quite a bunch of hiccups and glitches on the typo-level. Layout adheres to a 1-column b/w-standard and the b/w-artworks/photographs are nice and well-made. The big weakness of the module, ultimately, is that its action-scenes don’t have sufficient information to render them compelling – cartography, at least basic one, would have helped here. I can’t comment on bookmarks or the like.

Matthew Sanderson’s “For the Love of Money” is, in almost all disciplines, a glorious module: The Esoterrorist plot is challenging, smart and hard to foil and grasp, all while remaining fair. The antagonist reactions, detailed NPC-reactions, copious information for PC-actions and massive supplemental material really help. The investigation part of this module is really, really amazing. Unfortunately, the module does fall flat pretty much almost always (exception would be the cool visuals of the potential showdowns with the ODE) – they feel like afterthoughts. They don’t sport the same attention to detail, aren’t nearly as interesting and compelling as the rest of the module.

It is within the nature of the plot that integration into ongoing campaigns is hard, so I won’t penalize the module for that. However, the none-too-compelling action-scenes and lack of proper cartography drag down this otherwise great module. If you’re looking for a glorious investigation and don’t mind working on those bits, then this is a very clear recommendation. Otherwise, it remains a module for fans of investigation who don’t care much about the action-aspects of the game. When all is said and done, this gets the tone and feeling of Esoterrorists rather well and provides a compelling adventure, though one that falls slightly short of the excellence it could have easily achieved. Hence, my final verdict will clock in at 4 stars.

You can get this massive adventure here on OBS!
Endzeitgeist out.