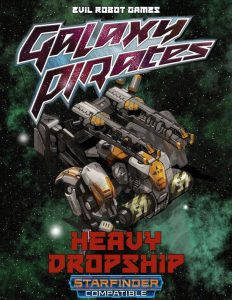 This installment of the Galaxy Pirates-series clocks in at 14 pages, 1 page front cover, 1 page editorial/SRD, leaving us with 12 pages of content, and the deal also includes a high-res jpg floorplan of a medical shuttle. Let’s take a look!

This pdf contains a total of 6 different dropships for your perusal, and these include one-page ship-sheets that already include the respective ship’s stats filled in, serving as ready-to-use handouts. Additionally, a page contains a selection of paper-model stand-up style artwork versions of the ship you see on the cover; the floorplan of the medical shuttle is included in a version that specifies what’s where in the pdf as well, serving as a nice complement to the VTT-ready jpg, which omits that information and thus can be used for other contexts as well. The awesome artwork is presented, handout-style, on a one-page size, handouts-ready, as well.

Each of the 6 ships features a brief introductory note on how they are used, a statblock, some ship notes and sample names (nice!), and a Computers-table full of DCs (EDIT: Typo in pdf was fixed), so that’s what we get structurally.

Regarding the respective ship tiers, we’re moving in the lower tier-section, ranging from tier 1 to tier 3, with all classified as small shuttles. The standard tier 1 heavy dropship is powered by an arcus light power core, and sports basic short-range sensors; it features mk 4 armor and defenses, as well as a mk 1 tetranode computer; S8 thrusters provide proper perfect maneuverability. No drift engine for the basic version, and three cargo holds. Basic 20 shields are applied in a 3:2 ratio to forwards/aft : port/starboard. Offense capabilities would be provided by a forwards-facing coilgun.

For the tier 2 heavy arms dropship, the shields are upgraded to basic 30, with the shields on port and starboard almost as well-developed as those on front and back. Beyond the crew being better, the primary change here would be that the offense has changed to featuring linked coilguns on the forwards-facing side. The increased power requirement of shields is satisfied by a pulse gray power core.

The heavy armored dropship (tier 2 as well) places s single coilgun on a turret, and uses a micromissile battery as the forwards-facing weaponry. Shields are upgraded EDIT: and now properly classified as light 60. For this fellow, we go with only budget short-range sensors, but upgrade armor and defenses to mk 5. A mk 1 duonode computer is in this one; like the heavy arms dropship, it sports 3 cargo holds as expansion bays. Funny: There is a list of irreverent nicknames for these types of ship: From “Anvil Chorus” to “Aerodynamic Brick Express”—that got a chuckle out of me.

The remaining 3 ships are all tier 3: The medical dropship gets light 50 shields with relatively even distribution, the base mk 4 armor and defenses, and a mk 2 trinode computer; the only weaponry here would be the ole’ forwards-facing coilgun, and 3 medical bays underline the focus of this one.

The science exploration dropship (tier 3) has a pulse gray power core with a signal basic hyperdrive and advanced medium-range sensors, and a mk 3 duonode computer. With mk 4 defenses and armor, is suitable regarding defenses for a non-primary combat ship for the tier, and the shields (6 better on forward and aft) also make sense; Good crew quarters make sense for scientists and two labs plus environmentally-sealed chamber as expansion bays certainly make sense as far as the designated use is concerned. Offensive capabilities would be provided by a turret coilgun.

The recon dropship uses the heavy armored dropship’s offensive capabilities, and also has the signal basic hyperdrive; as noted previously, we have 60 shields, which are distributed identically to the science exploration dropship; we have a mk 3 mononode computer, and also retain the science exploration vessel’s good quarters. Defenses are upgraded to mk 5, and sensors are improved to advanced long-range sensors. The science-vessel’s labs and sealed chamber have been replaced with cargo holds. EDIT: Computers check DC table has been fixed.

Editing and formatting EDIT: have significantly improved, getting rid of some typo-level glitches. Layout adheres to a 2-column standard, which, while in color, remains relatively easy to print, and the ship-sheets are really handy; similarly, the inclusion of a deck plan in full color, including a VTT-friendly, key-less version, is awesome. Weird issue, probably only on my desktop PC, as I haven’t been able to duplicate it elsewhere: The colors of that jpg display correctly for a second when opened, then switch to their negative values. The VTT is tried this with got rid of the issue, though. Just figured I’d mention it. The pdf has no bookmarks, but needs none at this length, and the dropship artwork provided is awesome (seems to be the heavy arms dropship, fyi).

I really appreciate the ships provided by Paul Fields and Jim Milligan; they take some time off my hands, and help when one needs to improvise; plus, I always maintain that SFRPG needs MOAR ships. And ship plans. Lots more. That being said, I am somewhat less enamored with this installment than with the best of the previous ones. A little bit more variation between the different types of dropship would have been nice to see. EDIT: As a whole, for the low price, and considering the neat plan + artwork, there isn’t anything to really complain about, now that the previous hiccups have been taken care of. It’s not the strongest of the installments in the series, but it does provide some neat bang for buck. My final verdict will be 4.5 stars, but in the end, I think this is closer to 4 than 5, hence I’ll be rounding down.

You can support one of the authors here on patreon!

If you are in a position to do so, I’d appreciate donations via paypal, or by joining my patreon.