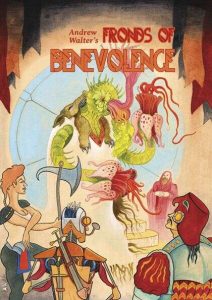 This module clocks in at 48 pages, 1 page front cover, 1 page editorial, 1 page hyperlinked ToC, 1 page back cover, leaving us with 44 pages of content, laid out in booklet size (6’’ by 9’’/A5). My review is based on both the pdf and the offset-printed hardcover-version. Let’s take a look!

This review was requested by my supporters as a prioritized review.

On the interior of the back page, we have a total of 36 common names, and 36 common occupations, which include cockfight referees, thinking engine specialists, etc.; similarly weird in a good way would be a 36-entry table of golden barge meals, and the inside of the front cover provides two d6 tables of rumors, which state that they want the GM to state whether they’re true or false; one d6-table is for the Northern part, the other for the southern part; facing this would be the point-crawl-style flowchart of encounters/regions that the party may explore. A pointcrawl is a way to depict overland adventure: Scripted encounters/locations are noted on the map, travel distances between them as well; it’s like each encounter/location is one dungeon room. Simple and elegant.

In the back of the book, we get a selection of 12 critters/NPCs and their stats, with some of them featuring Mien-sub-tables.

Regarding the theme, this book plays to Troika’s biggest strength: Full-blown strangeness in a playful manner, and the module, ultimately, is a road-trip like journey; it has a branching path of sorts, and is intended for 4 to 6 characters, but it does not focus on a riveting plot or the like. The module starts in the Duchy of Plandra, which is headed by Duke DeCorticus, a benevolent plant-overlord with a complex life-cycle that depends on rare earths; also known as star loam, this substance usually comes from “The Wall”, far to the south; now, no more shall be delivered. Is that due to the crazed pamphlets of seditionists that have been showing up in Plandra? It’s up to the party to secure the earths their patron/deity/ruler requires to survive.

Structurally, this is a broad-strokes type of module; the journey aspect caters to that aspect, and the GM is encouraged to move things along to the best of their ability; this is contrasted with something rather uncommon…

…but to comment on that, I need to dive into SPOILERS. Potential players should jump ahead to the conclusion.

So, on page p, the timekeeping aspect comes into play: At the module’s start, you roll 4d6; this is how long the Duke’ll have to live. Each day has 4 die-signs showing 6s, and every hour, you fill in a pip. On the pointcrawl page, a specific region lists its travel time, usually in days, to pass through it or to move to a connected locale; this means that, RAW, if the initial 4d6 roll is bad, the module can actually be unwinnable. I intensely dislike this. Say, you roll 4d6 and get 1,1,2,2. Then, the party takes the faster travel option, but might have to wait 1d3 days; the party is lucky and comes up with a 1 day waiting period and rolls travel duration for it: 1d3, comes up as 3. One day left; even with ideal actions by all players, they cannot return to Plandra in time to save the Duke. As an aside: The Duke’s life is on the line—the party should have an express barge set up for them. The delay to even start the journey makes no sense to me. Granted, a pretty bad scenario for the Duke’s life is not that likely, but a minimum value (it’s 6 days, fyi) noted for the GM to save the Duke, or a suggested number for a fair, a tough, an extreme challenge? That’d have been helpful.

Anyhow, I already mentioned branching paths and travel options: The party has two general venues when it comes to traveling from Plandra, first of which would be a Golden Barge; the other being a stilt loper, essentially a massive platform on two goofy mechanical legs. The stilt loper walker can set off right away, but it requires trusting the pilot, and is slower: the very first travel to the first associated area takes 1d6 days. You see where I’m getting at. The randomized deadline doesn’t do the module any favors.

This out of the way, the first of the most likely routes is the one with a stronger intrigue-theme: taking the Golden Barge also means that the party will probably have a fight with a void beast, and there’s a chance that the auric liquidators will attempt to blow up the Barge; these liquidators are the fanatical secret police that serves Green Overseer Feng, the delightfully goofy mastermind behind the brewing sedition and pamphlets denouncing Duke DeCorticus. If the Barge does crash-land, it might end up on an asteroid, which sports the one content-level gripe I could find; the rudimentary culture on this piece of rock is governed by The Calculatronicus, a vast engine capable of firing rays, but which lacks the stats for these rays. The rainbow badlands haunted by the (white) wine-colored raiders would be the second possible location to crash.

Which brings me to a structural nitpick with this module: While there are possible connections between routes and options given for, and where the barge crash-lands is actually noted in a table, there is no real guidance provided there; one silt loper pilot wants to get to the emptied city, which can be reached from the rainbow badlands, the asteroid, and from the eye-bleed badlands, but WHY the party would get there/the connection per se, is weak. The asteroid is another example: It can lead to the rainbow badlands, or to the emptied city, but how? The GM needs to fill in those details.

Thus, as a whole, the module does feel in parts like a well-fleshed out outline, but one that does not sport a consistent connective tissue between all locales, which, admittedly, tend to be outrageous and interesting.

As mentioned before, one way to solve this would be to reach the Wall and best Overseer Feng in his cupola; I generally like this route, but the society atop the wall and the unmapped chambers of the cupola have made this section a bit more opaque than I’d have liked it to be.

The second way to save the Duke would be to find an Yggdrasil-sized tree and reach its roots, where the psychic holy tuber is guarded by 3 undead gardener-knights with unique weaponry, all in a village otherwise only inhabited by grotesque mummies, whose heads have been replaced with roses, which struck me as a truly disturbing and weird imagery.

A big plus of this module would be its significant replay-value; there are many ways to go about solving the module, and e.g. the cultural conflict between the red and white wine-colored raiders is but one of the various strange tidbits; having a species of pseudo-baba-yagas hunt silt lopers? Interesting. Terrain-features with actual impact on gameplay? Nice. I couldn’t help but feel, though, that the module would have been better-served by decreasing the number of locations, and instead providing more details for them…and being consistent in their connective tissues/transitions.

Editing and formatting are good on a formal and rules-language level. Layout adheres to a 1-column standard with a blending of original b/w and full-color artworks in the same style as seen on the cover. The pdf comes fully bookmarked, with the header of each page of the pdf jumping back to the pointcrawl map—nice. The pips of the die-timeline can be marked in the pdf version as well. Kudos! The print version is a solid, well-crafted hardcover.

Andrew Walter provides a nice, fast-paced journey when it works as intended; if the GM consistently pushes the party forward and hasn’t rolled too low on the days-to-live-counter, the module can feel like a truly strange and fascinating roadtrip that taps into the same kind of weirdness that the Troika! core book proposes; hitting this note is impressive. On a downside, if a party does want to think, linger, plan, act methodically, then this module might well be frustrating for the party and GM alike, as the connective tissue between locations, how to actually get from A to B, is more vague than it really needs to be. Quite a lot of pages have between ¼ and 1/2 of a page of free space, so the module certainly had plenty of space to put these final developments in.

In many ways, this module, to me, is slightly frustrating; with one final development pass and some blank spots filled out, this could have easily been a masterpiece. Having a player-friendly map of the pointcrawl, or parts of it, would also have been helpful indeed. In the end of one of the routes, some maps would have been helpful as well.

This adventure is certainly unique, brims with creativity, and has some delightfully outré ideas, but it does lack that final refinement to make everything smoothly gel together; not to the point where an experienced GM is stumped, but certainly to the point where this needs some serious planning to run smoothly. As such, my final verdict can’t exceed 4 stars.

You can directly support the Melsonian Arts Council’s Undercroft ‘zine here on patreon.

If you have the means, please consider leaving a donation via paypal, or joining my patreon.