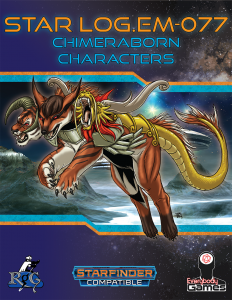 This installment of the Star Log.EM-series clocks in at 8 pages, 1 page front cover, 1 page editorial, 2 pages of SRD, leaving us with 4 pages of content, so let’s take a look!

As an aside: The concept of the playable chimera had originally been introduced for PFRPG as a class-neutral general archetype, but personally, I do think that the SFRPG-implementation is actually smoother in its structural interaction with the system, since SFRPG is better suited for the global archetype concept. This is not a simple linear conversion.

After a brief introduction on the chimeraborn, we begin with a new theme: Instead of the usual theme knowledge, the theme makes the character a Large magical beast with the shapechanger subtype and the race’s original reach, and you count as both the original race and as a magical beast. However, the pdf does not future-proof this aspect: If e.g. an effect affects shapechangers in a benevolent way and penalizes the original race, we’ll need a GM-call. The body has three heads and the front paws are as prehensile as the hands of a human. You get shape change to a version of your original race. While in your chimeramorph form, you lose all racial traits except Hit Points and ability score adjustments. You also get +1 to Strength. At 6th level, each head has its own name alignment within one step of you, and the same languages and mental ability scores. This nets you a +2 insight bonus to saving throws versus mind-affecting effects, but the other heads also tend to voice your desires, which is a glorious roleplaying angle if handled well. 12th level nets you +1 Stamina per level, +1 for every further one you attain; 18th level lets you, up to twice per day, as a move action while in chimera form, roar and recover 1 Resolve Point.

The chimeraborn scion archetype requires the theme, and at 2nd level nets you Skill Focus with two skills, one skill from each of your other heads’ list of associated skills. At 4th, 6th, 9th, 12th and 16th level, you can replace the usual class feature with a so-called chimeraborn instinct. Minor nitpick: The ability is called “Temporal Scion” in an obvious cut-copy-paste glitch from Timelost Characters. Also: The ability should note that 2nd level does net an instinct – that has to be deduced from context.

As for the heads, these all have different skills associated with them, and grant you abilities: Animal heads net a vesk’s natural weapons, blindsense (scent) 30 ft. and low-light vision, with the associated skills being focused on the physical. Dragon heads net you blindsense (vibrations) 30 ft., a dragonkin’s breath weapon, natural weapon and darkvision, while the magical beast head nets darkvision, low-light vision and natural weapons. Slightly problematic here: The dragon head is much better than the alternate choice regarding magical beast heads…at least unless you make smart use of chimeric evolution, an instinct which nets you a polymorph (1st level) based access to an ability of a creature whose head you have. 6th and 12th level instincts feature btw. upgrades of this one.

2nd level instincts also include the ability to have gear incorporate into your form, and quicker shapechanging. The 6th level instincts include an ability to upgrade the chimeric creature’s natural weapons – oddly, it does reference the requirement of natural weapons, when it is impossible for the chimeraborn to not have them. Chimeric shapechanger is a Resolve-powered, limited ability to assume the shapes of the creatures of your alternate heads, with limitations properly included, and scaling handled precisely. There is also the means to spend Resolve to shunt mind-influencing effects into your other head. The 12th level instincts include an upgrade versus mind-influencing effects to +4, and an evasion like defensive boost for them. There is also a means to get a 4th-level polymorph (not italicized) available universal creature rule, and the means to assume a hybrid form, which erroneously refers to itself as an evolution once.

Editing and formatting are okay on a formal level, and on a rules-language level, odd: On one hand, the design is super-precise regarding high-difficulty concepts; on the other hand, there are some remnants and slightly rough patches that make this ultimately feel like a condensed version of a complex option that needs more room to shine. Layout adheres to the series’ two-column full-color standard, and the pdf comes without bookmarks, but needs none at this length.

Alexander Augunas at once did a great job converting this, while also stumbling a bit in some details. These minor niggles don’t impede the usability of the material herein per se, but they do make this feel rougher than it should be. As a consequence, I can’t rate this per se conceptually amazing file higher than 3.5 stars, rounded up due to in dubio pro reo and the low price. If the concept even remotely intrigues you, get this – it’s worth the fair asking price.

You can get this unconventional pdf here on OBS!

Missed the PFRPG-version? It can be found here!

If you enjoy Alex’ work, I’d recommend checking out his Eversaga Patreon – he is designing his own game, and so far, it’s looking AMAZING.

If you enjoy my reviews, consider leaving a donation, or joining my patreon. Thank you.