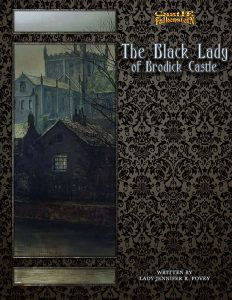 Mesdames et messieurs, it has been too long since I had the opportunity to welcome you all in my salon for the purposes of the only past-time appropriate for the discerning connoisseur of proper pedigree – it is time that we once more engage in our favorite past-time and start a round of the Great Game! We shall, during today’s meeting, engage in a subject matter that is not for the faint of heart, but as Samhain’s approaching and thus, the season may seem appropriate to indulge in the darkly romantic flights of fancy one associates with those newfangled degenerates touting themselves as “Romantics” – with the proper distance of a distinguished New European perspective, of course.

Our discussion will today focus on the latest adventure entertainment released by the esteemed Fat Goblin Games, penned by none other than Lady Jennifer R. Povey. We are looking at a booklet of 26 pages in size, with one page devoted to the cover, one to the editorial, and one to advertisement – it seems the Fat Goblin Games authors are peddling wares beyond those immediately applicable, but nonetheless potentially useful for our purposes.

In the unfortunately all too likely event that some dastardly scoundrel has recently managed to compromise your integrity by stealing this most valuable of commodities commonly known as time, rest assured that a total of 6 different pregenerated dramatic characters are included within this booklet, presenting a variety of beings, included a distinguished member of the Fae, and, please be strong, dear ladies, an American – a woman, and one who is both unmarried and wealthy! Uncouth indeed, but it is right and proper to share culture, correct? Is it not the responsibility of the noble and distinguished of New Europa to elucidate and enlighten, to teach to transcend?

Exactly! Anyways, these illustrious being have direct reasons provided for partaking in the sojourn presented within these pages, and they all feature a visual representation to help you picture them in that most wondrous of third eyes that we often call imagination. The attention to detail here does, I’m very much afraid, cut into the fabric of this fine tome, though – no less than 10 pages are devoted to this illustrious and well-written cadre.

Now, it is obvious and proper, but I’d like to exclaim that only the most dastardly of scoundrels would continue reading what it to follow; only the illustrious society of right and proper hosts should continue reading, as we are bound to dive deeply into what the common man has taken to call by the moniker of “SPOILER” – pardon my French.

Now that all potential people of proper pedigree that wish to partake in this adventure entertainment taken their temporary leave, now that we hosts are among our peers, let us discuss the curious and confounding subject matter and happenstances elucidated within these pages.

After a brief recap of the dramatis personae encountered within, all of which are presented with the information deemed necessary to employ them in the capacity of conversation partners or foils for the dramatic characters, we are introduced to the lay of the land – in this case, regarding the Isle of Arran in Scotland, which has recently seen a significant influx of land consolidation, as progress marches ever onwards. The eponymous Brodick Castle has always, as superstitious rural folk are wont to weave them, been host to many a macabre tale, but in recent times, a new specter seems to have actually manifested there – the Black Lady. Speculation, obviously, runs rampant as scholars of dubious repute and devotees of the macabre speculate on the nature of said entity – are we looking at a ghost? A dread banshee, mayhaps?

The esteemed London Society of Phantasmal Research, to be more precise, the esteemed Mrs. Memory Lord (a peculiar name, n’est-ce pas?), seeks to proper investigate the cause of this puzzling phenomenon, and thus contacts an illustrious cadre of cavaliers and ladies, i.e. the dramatic characters, to travel to the Isle of Arran and investigate the occurrences. Mrs. Lord is childhood friends with Lady McIlroy, and as such, worries, as any kind-hearted soul would, for the safety of her childhood friend.

Approaching the castle, the dramatic characters will bear witness to this novel idea of tourism, this notion of visiting places for sheer enjoyment; while understandable regarding the changes that have come upon the centers of our bustling economies, it is still a tendency I believe to be one that is rather peculiar and that warrants some investigation and contemplation regarding its moral consequences. A henchman named Sheach acts as the carriage driver and person to introduce the dramatic characters to the quaint village pub, aptly named Eider’s Down.

Laird Thomas McIlroy, a gentleman of flawless manners and mien, proceeds to invite the dramatic characters to tea and lunch, as is right and proper, but curiously those among you gifted with sufficient empathy, or those who have developed the keen sense of characters commonly ascribed to the fairer sex, may pick up on the curious notion of the Laird being less than enthused by the presence of the dramatic characters. The interior of the castle is, much like the outside, one that hearkens to the gifts of some of the more maligned among the Fae – impressive at first glance, they show signs of decrepitude and decay. And indeed, an exorcism of sorts is considered to be completely out of the question, which reminded me of the old adage of the madness of living in one’s history, but I digress. Still, a curious defense of a spirit so haunted, isn’t it?

The Lady is, alas, not much help either, as poor Lady Sheena McIlroy is bedridden with a malaise and thus not wont to engage in much wandering. More helpful would be the nexus of any form of rumormongering engaged in through the spheres, whether sub-or supralunar – the barkeeper can indeed fill the dramatic characters in regarding a rather interesting assortment of peculiar observations; one of these is an illicit affair between, scandalously, the pastor’s daughter. Yes, sure, the Laird would be the other party, but noblesse oblige, isn’t that right Mesdames et messieurs?

The girl does not take kindly to strangers and seeks to avoid confrontation, but ultimately buckles under the cajoling and proper application of social graces and decorum exhibited by so well-traveled individuals as the PCs, admitting to the affair (which, in a manner that is rather scandalous) seems to not only have been consummated – she actually has been promised the tawdry frippery of money to follow her pipe-dream of taking to the grand stages of New Europa! A truly thorough investigation of the castle’s gardens will not only unearth the Black Lady’s glove, but also a secret entrance, undoubtedly intended for use by servants in husbandry – but curiously, no trace of magic!

Indeed, attempting to confront the Black lady may well have her drop a scarf that should render the truth rather obvious, even if you, which you undoubtedly have, already are very much cognizant of the actual situation: The Laird has been using his mistress to generate…income. A member of nobility? Verily, New Europa is heading towards turbulent times, it seems! However, just as the dramatic characters are convinced that they have solved this mystery 8and they’d be correct in that assumption), the doors of the castle fly open and Caitir Mac An Aba, the banshee of Arran, storms in, intent of punishing the Laird for sullying her good name and legacy! The mighty fae may be reasoned with, sure, but is that the right course? Would a grisly demise at her talons be more appropriate? It is up to the dramatic characters to decide that.

Editing and formatting, the terms applied to judging the formal criteria of prose and adherence to conventions by tradition and necessity, are executed in an expertly manner. The artworks taken from the wealth of visual representations taken from what is commonly known as public domain, are well-chosen indeed, and the artistic rendition of the pages themselves, organized in 2 columns and full color, is aesthetically pleasing, as we’ve come to expect from rick Hershey. The magical shortcuts, those fae-paths that allow for quick navigation of the ephemeral, magical version of this adventure entertainment, the things commonly referred to as “bookmarks”, are provided for your convenience.

Lady Jennifer R. Povey proves that the mind of this lady can indeed conjure forth adventure entertainments that can provide a rather entertaining time for all concerned; however, one should not be remiss to mention that the adventure entertainment may best be suited for newer players of the Great Game; veteran investigators will potentially consider the truth to be rather obvious from the very arrival onwards – a couple of false leads and a few more pages would have elevated this adventure entertainment beyond the comparably simple solution provided. This notwithstanding, I feel comfortable in pronouncing, judging from both mien and reaction of those gathered here, that enjoyment was had while solving this mystery – mainly courtesy of the finale, I might add. As such, the verdict bestowed upon this adventure entertainment will be 4 stars.

You may purchase this adventure entertainment here!

As always, I bid you adieu, and until next time!

I remain, faithfully, your humble host,