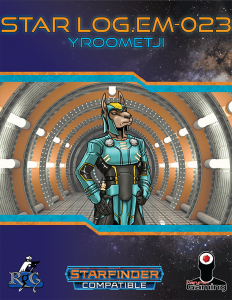 We begin this supplement with the by now traditional contextualization of the Yroometji within the frame of the Xa-Osoro galaxy, the evocative setting shared by Rogue Genius Games and Everyman Gaming, beginning the pdf of a flavorful note. We then proceed to get the racial information on the Yroometji regarding their physical descriptions, home world, etc. In case you didn’t know: We’re talking about kangaroo-folk here, which is a damn fine concept! The only flavor aspect not covered here would be the “Playing as…” sidebar that the core book races have, where brief preconceptions and clichés pertaining the race and its perception are noted.

Yroometji, rules-wise, are Medium humanoids with the yroometji subtype (no subtype graft included in this one) and have a base speed of 30 feet. They get +2 Str and Cha, -2 Int and low-light vision. Yroometji get a +2 racial bonus on Athletics checks and add it to their list of class skills. They are treated as having a running start for jumping purposes, and while jumping, may move as though they were flying with average maneuverability, which is a *REALLY* cool angle to represent jumping and unique tricks. They get 1d3 lethal damage causing natural attacks, and don’t treat unarmed strikes as archaic; starting at 3rd level, they add 1.5 times their character level to these attacks. They also have a pouch, and may store 1 cubic foot or items weighing up to 1 bulk in total in the pouch. Items may be transferred to and fro from pouch to hand and vice versa as a swift action, and may empty their pouch to the floor as a move action. Really cool!

…however, know what’s missing? Yep. The HP-value. I assume from the chassis that 4 or 6 may be intended, but I’m not sure.

On the plus-side, the pdf does introduce the null-space expander, which comes in 4 different mk-levels. This augmentation lets you fit even more stuff in your pouch and is concisely priced and codified. (And it’s so cool! Picture it: Drawing forth a ladder or 10-foot-pole from the pouch? Hilarious!)

The pdf closes with a new spell, the second level pouch ally, which is available to the mystic, as well as the legacy classes wizard, cleric and bard from Starfarer’s Companion. You need to be a marsupial to cast the spell, or have an equivalent pouch via an augmentation or somesuch. By casting this spell, you shrink a creature within one size category to 1/16th of their size and 1/4000 of their mass and transfer the creature into your pouch. Gear is left behind, and the target slumbers and is subjected to a state of lucid dreaming. It is nourished by you, and automatically stabilizes, and replenishes Stamina, Hit Points etc. as if resting, though at an accelerated rate. The target counts as 1 bulk, is basically live bubble’d while in the pouch, and if you die, the spell ends. The spell even gets the conditions for reemerging targets right. Total winner! I can see the sheltering bodyguard, the motherly medic and a wide variety of unique concepts based on the spell. Huge kudos!

Editing and formatting are very good on a formal and rules-language level, with the notable exception of the HP value missing, the one big strike against this pdf. Layout adheres to a 2-column full-color standard and the artwork by Jacob Blackmon makes the yroometji look kickass! The pdf has no bookmarks, but needs none at this length.

Alexander Augunas’ yroometji are cooler than their Pathfinder brethren: The unique tweak on their jumps is amazing and creative and the spell and augmentations are winners indeed. This usually would be a 4.5 or 5-star file. However, the missing HP value, at least for now, deprives me of the option to pronounce the recommendation I’d otherwise utter regarding this pdf. It’s a small thing, and not something that should deter most GMs, but I can’t go higher than 3.5 stars for these guys – at least for now. I can’t justify rounding up, though. Everyman Gaming has a track-record of updating files, though, so once this glitch’s been taken care of, consider this to be a 4.5 or 5 star-file instead; same goes if you’re willing to just make a call on the HP-value.