Whisper in the Crags (OSR) 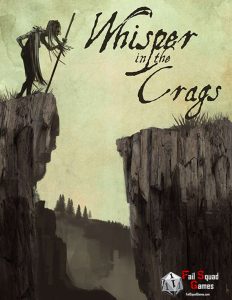 This module clocks in at 15 pages, 1 page front cover, 1 page back cover/thank you, leaving us with 13 pages of content.

Okay, so this is an adventure for 4–5 characters of 4th level; while the pdf does have boxed text, it’s not really read-aloud text, but rather what some NPCs might say; the module, structurally, is pretty linear and included a really nice full-color region map. The regional map is missing a scale and grid, and there is no player-friendly iteration included, which struck me as a huge pity. The module also sports a smaller and significantly less-impressive small dungeon map, which does have a grid, but no scale. There also is no player-friendly version of it, and the map is very small, so not that useful for VTTs. The artwork used herein is impressive indeed: Raven Metcalf provides artworks that reminded me of some of my favorite creepy gothic manga like Bizenghast; for the non-otakus: Think of a slightly more sinister aesthetic than Tim Burton; more scratchy lines and slightly more wicked. Love that. As a system, this uses Swords & Wizardry.

All right, only GMs around? Great! So, the adventure is set in the small settlement of Lorview, which is not really detailed; in a somewhat puzzling decision, the name of locals and the information they provide have been relegated to an appendix, which makes rendering the start of the module a bit weird. It should be noted that one of the background knowledge entries refers to 2:00 AM, which does imply a church or the like, or other form of reliable time-measuring, so that’s something the GM has to bear in mind. The module begins with the party patrolling near the settlement, finding a doll; the tracks to follow are really hard and no consequence for failure is given, which is odd, since that’s the sole lead-in provided for the module. There also is a hidden stash here. Hope your party includes someone who gets an autoroll…

This is the best point in time to note that this module does not do a particularly good job at OSR design, alas; we have a creature reference that is a 5e-remnant; we have references to e.g. STR checks; disorientation mist suddenly is anti-magic (why? No clue), and Know direction isn’t taken into account. Like in the 5e-version, read-aloud text and NPC statements are not clearly set apart from the remainder of the text. In an investigation, some details “may be noted” by the party, but no “how” is really presented. This is bad; really bad…but at least it’s not as borked as the 5e-version. Design-wise, this doesn’t get that part of the charm of OSR gaming is the decreased emphasis on fighting, with a higher focus on problem-solving and the like; this module railroads the party into several combats that can’t really be avoided, stacked in favor of the party, etc.

Anyways, what I’m trying to say is: If rules-integrity or ease of use is important to you, then this’ll test your patience to the limits. If you’re really into the whole problem-solution-angle of OSR-gaming, then this will also be something that disappoints you.

You see, the hard to follow trail leads to a weird sight: A local girl, Lottie Fisher, having tea in the forest with a troll! And yes, with an appropriately dainty tea-service. How would your party react? If the response was anything else than “Troll, kill it with fire! (Or Acid!)”, then this module may not be for you; the chance for a social encounter, for the party not murderhoboing towards the strange pair isn’t even considered. The troll lifts up Lottie, and runs, quite literally, for the hills. What follows is a sequence of bland encounters as the party runs after the troll: Wolves, vine blights and bugbears. Oddly, the “chase” is scripted in a way so that the party only loses the troll if they rest; it’s also weird that the wolves can’t be dealt with by druids/rangers, and that the bugbears may be negotiated with, but that’s about it. The pdf is also littered with remnants from the (Pseudo-) 5e-version.

Editing and formatting are bad on a formal level, and also fails at the simple job of rules-language for an OSR-game. Ouch. Layout adheres to a nice 2-column full-color standard, and as noted in the beginning, I genuinely liked the artworks by Raven Metcalf. The cartography is okay, but extremely limited in its actual utility, and the encounters that needed maps don’t get any. The pdf comes with two basic bookmarks and a second printer-friendly version – kudos for that!

Lloyd Metcalf’s “Whisper in the Crags” is, design-wise, a disaster. The OSR-version doesn’t suck as bad as the 5e-version, but still is a long shot from being good for the system; structurally the module is bereft of almost any player-agenda. It’s a straight railroad from start to finish, and one that forces the party into cruel, unpleasant decisions.

How unpleasant? I consider this to be more mean-spirited and depressing than “Death Love Doom”; DLD was at least so over-the-top and grotesque, it kinda came out on the other side as a gory schlock-fest, and it had player-agenda. It also didn’t force the party into the roll of unempathetic murder-hobos and present essentially a child serial-killer; it went for mercy-killing, which was dark enough. And yes, I’m a frickin’ edge-lord. I liked Death Love Doom for what it was. I did not like this. The ramifications and reactions of the village and party are pretty much a joke.

Thankfully, I don’t have to take the moral implications of this module into account at all. Why? Because this is structurally so bad it sinks itself even if you and your group are totally okay with the themes. Because it’s a boring, miserable railroad that knows combat, combat and more combat. Because, for OSR-versions, the rules may be less important, but the structure underlying a module becomes more important, and this fails miserably there as well.

The “investigation” is nothing but a series of cutscenes; the party has no real bearing on the story, and this has plot holes so large I could fly a dragon through them. I can make out no saving graces. 1 star.

I would not recommend getting this, but if you really want, you can find it here.

If you want your dose of grimdark misery, Death Love Doom can be found here.

If this review spared you a few bucks, consider leaving a donation via paypal, or joining my patreon. Thank you.