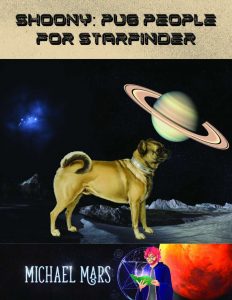 This pdf clocks in at 7 pages, 1 page front cover, 1 page editorial, 1 page SRD, leaving us with 4 pages of content, so let’s take a look!

Shoony get +2 Dexterity and Charisma, -2 Constitution, 2 HP, are Small and have a speed of 30 ft. and low-light vision. EDIT: The bonus types have now been codified properly. They get a +2 racial bonus to saving throws against inhaled threats such as gasses, stench, etc. courtesy of their short snout, and they get a +2 racial bonus to Acrobatics checks to move through threatened squares. They also get +2 to Diplomacy and Bluff, and may change attitude by up to 3 steps, and get a +2 racial bonus to Survival checks. Shoony get Practiced Improvisation as a bonus feat. Personally, I’d have enjoyed a tighter version here, but they work as written.

The flavor information has been properly adjusted, including notes on homeworld, playing a shoony, etc. Alternate adjustments include +2 Intelligence and Charisma, -2 Constitution; -2 Charisma and +2 Constitution and Dexterity; and -2 Charisma, +4 Strength.

The feat-section has been expanded: Sodbuster still nets 10 ft. burrow speed; Practiced Paddler nets ½ land speed swim speed, but only for one shoony sub-species. Practiced Improvisation makes clubs and improvised weapons no longer count as archaic. Imperial Combat Training makes natural attacks count as unarmed, and you may use them sans using hands, including combat maneuvers, even if hampered in some ways. Catch Off-Guard adds Weapon Specialization bonus damage, if any, to attacks with improvised weapons, and unarmed opponents are flat-footed against attacks you make with improvised melee weapons; also eliminates the atk penalty.

Editing and formatting are very good on a formal level, good on a rules-language level. One alternate racial trait is still missing the bonus type, but that’s a minor hiccup. Artwork employed is a selection of neat, comic-style pug artworks, and the pdf has no bookmarks, but needs none at this length. The pdf comes in three versions: One regular-sized one, one with a smaller file-size for mobile devices, and one printer-friendly iteration. KUDOS!

Glen Parnell’s conversion of Michael Mars Russell’s shoony species is solid, but pretty unexciting; quite a few components have just been copied. Now, I get it: SFRPG doesn’t have the same design space for races as PFRPG, but more than some alternate adjustments would have been nice. Similarly, the lack of a subtype graft for the species did disappoint me a bit.

All in all, this is an okay conversion; it’s not exactly spectacular and is less meaty than the PFRPG-iteration, but for a buck, it’s worth checking out for pug enthusiasts. My final verdict will be 3.5 stars, rounded up due to the very low price.

If you found this review useful, consider leaving a donation via paypal, or joining my patreon here. Thanks!