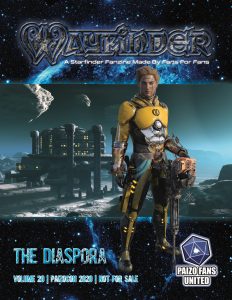 The 20th installment of the FREE Wayfinder fanzine (this time penned for SFRPG) clocks in at 80 pages, 1 page front cover, 1 page editorial/ToC, 1 page SRD, 2 pages of advertisement, leaving us with 75 pages of content, so let’s take a look!

The theme of this installment would be the diaspora, so let’s dive in! We’ll begin with taking a look at the “Weal or Woe”-sections, wherein one potentially allied NPC, and one adversary are presented. As usual, these come with boons and individual artworks, alongside full statblocks. The first of these is penned by Stewart Moyer and lavishly illustrated by Tanyaporn Sangsnit; the first of these pairs would be the CR 6 nuar soldier Coralhorn Isidore, while the first adversary would be Nerodia Haros, a CR 6 sarcesian who has a deal with none other than Charon – both characters are cool, though minor hiccups like incorrect Resolve values can be found here.

The second pair of NPCs, penned by Paul Chapman and illustrated by John Laffan and Adil Araf presents a CR 5 kasatha operative and an amazing-looking dwarf soldier hellknight – the artwork of this fellow is close to Warhammer 40K’s aesthetics, but still feels like its own thing. Nice indeed! Nicholas Hite provides a CR 3 uplifted bear mechanic and an adversarial uplifted bear mystic, both illustrated lavishly by Chris L. Kimball. Hilary Moon Murphy presents a CR 4 dwarf mechanic and a dwarf mindbreaker mystic – once more, interesting characters, though the overall comparison of the characters (for they really come off as proper characters) does show that the precision of the statblocks oscillates a bit between authors.

The zine also contains a variety of new themes:  Scott Colin McDonald and Kyle T. Raes present the Itinerant (which come with their own lexicon of in-game terms – LOVE that piece of flavor!) and the station resident theme, the latter of which allows for improvisational repairs via the destruction of other technological objects, with price used for scaling benefits – clever. Chris Brandforth has 4 more for you: The voidwalker is a zero-g specialist; star-questers live among the dwarves and have taken on board their spirituality; anomalists are focused on, well, researching weird stuff, while desolationists are fascinated with wrecked planets. Per se solid, though two of these sharing electricity and fire resistance at 12th level can be construed to be slightly redundant. Speaking of blasted planets: Jonathan Hendricks and Steven Czerniak also provide 4 new themes, focusing in topic on people from lasted/hostile planets and environments – we have the chainbreaker, opposed to oppression, while gangbusters focus on busting gangs, eliminating criminal elements. Asteroid miners do what’s said on the tin, and I am particularly fond of the astral composer, hearing the melody of stars – as an aside, if you enjoy Aethera as much as I do, this one’d fit that setting perfectly. Just sayin’.

The magazine also contains new tools for classes – Eric Hansen has new envoy class options for us, with an option to apply expertise die to Piloting instead of Sense Motive, and 3 associated expertise talents for pilot envoys. Two feats, one for better ramming/running over creatures, and one helping with evading in vehicle chases. We have gnolls as a playable race (penned by Mikhail Rekhun), supported by 2 statblocks, though they are presented like Alien Archive races – you know, sans the excessive information, the notes of what other species think of you, etc. – and there’s an interesting angle that uses ghost sound and modifying it via feats etc. Soldiers wishing to focus on brawling can do so with a new fighting style supported by two gear boosts, written by Alexander J. Ogilvy – I enjoyed this one. Jonathan Vaughn and Kelly Youngblood provide a whole slew of uplifted dinosaurs as playable races – velociraptor, triceratops, ankylosaur and Pteranodon; the latter fails to specify the type of their fly speed, though from context, extraordinary is clearly intended. Sasha Laranoa Harving’s songbird protégé (lavishly illustrated by Beatrice Pelagatti) is pretty neat, an archetype focusing on fencing with tricks, skirmishing…or buff allies, gain blindsight, etc., for the archetype’s abilities are tied to ability scores chosen. A complex and interesting archetype that manages to meaningfully alter the playing experience. Nice.

Dejan Veskovic offers new spells – 3 themed around the lingering echoes of the cataclysm that wrecked the diaspora, and 3  focused on mining magic – leaving trails of dazing time or opening wormholes are certainly cool options, and suitably-placed at their respective spell levels.

As far as tech is concerned, we can find new systems for starships here, with automated excavation and an expansion bay for oversized weapon mounts is super interesting; need to test this one further, but so far, the limitations suggested have kept it n check and made it feasible. Two tier 3 ships complement Jay Boehm’s treatise here. Alexander J. Ogilvy and Brendan Whaley tackle diasporan specialty power armors, the RAID and the LASS, and armor upgrades for wings and pursuit wheels made me very happy. Why? Because that lets you make Code Geass Knightframes, and I’m a frickin’ Lelouch fanboy. No surprise there, right? ;P Anyhow, we also solid other augmentations here, with gyromag limbs, an arm that lets you add the Sunder special property, and there are eyes – these increase the first range increment of small arms and grenades, AND the range of close spells – which is OP, particularly of roughly 7K credits.  John Laffan provides rules for maneuvering starships through asteroids (with atk/damage for them, two new stunts, and 4 new crew actions) – I really enjoyed this one, but think that this would actually warrant further expansion. Jeremy Corff offers acid and fire base burrowing charge grenades alongside plasma pickaxes, PCMs and atomic lances.

Jessica Catalan introduces us to the asteroid Whimsy and Roxie Sprocket’s spectacular starships, with a tier 1 shuttle, a tier 5 explorer and a tier 9 heavy freighter (the glamstar) included. Pithica provides a tier 5 thaumtech shadowrunner shuttle, with John Laffan providing 3 starships used by the blazedryer goblin tribe (tier ½, 4, 8); Garrett Guilotte has gravitational tools and an idea for a hyperspin hazard (which is presented as a pretty massive wall of text, making it a bit harder to parse than it should be); Joseph Blomquist’s Boomrock Run fiction + space hazard has the same formatting. And yes, I’m aware of this not being non-standard, but I can’t help but feel that the information could be relayed in a way that’s easier to parse. Dennis Muldoon’s article on low-tech jury-rigged hazards is focused on the character level instead of potentially transcending it, and with its decoy keypads, sealed portals and quick releases certainly makes for a welcome addition.

As far as GM-centric material is concerned, there is a lot of flavor to be found here: Daniel Angelo Monaco introduces us to The Res, the resident habitat ring of the Songbird Station, and  also has an article herein introducing us to a smattering of minor factions. Pithica42’s diasporan school bus addresses one of the mundane aspects of life that I personally need to consider a scific/space opera setting plausible – a freighter repurposed as an educational institute. Really cool! Maarten Mullens jellyfish shaped business station (illustrated rather well by Michael Tumey). Kim Frandsen has a brief introduction to the Calisco space station, and Mikhail Rekun introduces us to the dreaded crackmarrow gnolls. 4 side-trek seeds (written by Nathan Ross, Steven Czerniak, Alex Chilver and Tineke Bolleman) complement this section. Of course, there also is fiction herein: Alison Cybe, Brad Fiske, Maarten Mullens and Jay Boehm provide brief pieces.

But that’s not all. Remember the dwarf mechanic and pirate mindbreaker mystic by Hilary Moon Murphy I mentioned? Well, they complement a brief adventure for 4-6 level 4 characters, with the fully mapped (Michael Tumey’s handiwork) Wandering Water Bear starship, read-aloud text, etc. – the module is surprisingly roleplaying focused, which is a GOOD THING as far as I’m concerned – it pretty much kicks off with the need to get the ship’s crew to quit. Cool angle! Of course, there also is some combat to be had, but yeah – considering the limited space available, this does a good job!

The final section of the pdf is devoted to the Alien Archive section – I.e. new critters galore. Bran Hagger, Michael Garrett, Mischa Catalan, Douglas Edwards, Adam Kessler, E.S. Willoghby, Jaster Catalan, Brad Fiske, Dave Breitmaier, Beth Breitmaier, and Jeremy Corff are credited as authors. From playful asteroid gardening fey (whose garden can eat you…) and starship-sized gravwhales to energy wisp swarms, we have playful critters here, yes. But we also get some creepy undead, weirdo aliens, and even an INCREDIBLY cute rabbit-tribble. Sure. Trenabits can fire ice and stuff…but I WANT ONE. NOW. Not sure which artist drew this critter, but…respect. It’s awesome and just the perfect blend of cute and WEIRD. Love it.

Editing and formatting are good on a formal and rules language level; layout adheres toa  really nice two-column full-color standard, and the pdf is chockfull with original artworks, which range in style and quality from Paizo-levels to somewhat charming hand-drawn pieces evoking a sense of an old-school zine. The pdf comes fully bookmarked for our convenience. Cartography, where present, is full color and neat, but unfortunately, we don’t get player-friendly one-page versions that’d be easy to use in Fantasy Grounds, Roll20, etc.

A whole bunch of authors have provided their talents to this issue:

A huge amount of artists have drawn art for it:

To get this straight: If this was a commercial product, would I recommend it? Yes, with the price and supplemental features determining the final rating in the upper echelons I’d settle on. It’s not perfect, but considering that this is FREE and features so many cool concepts? Heck yes, get it asap!

You have nothing to lose from downloading this, and as such, I remain with a heartfelt recommendation of 5 stars + seal of approval. This is worth getting, reading, commenting and sharing.

You can get this magazine FOR FREE here on Paizo!

If you enjoy my reviews, please consider leaving a tip via direct donation, or joining my patreon. thank you.