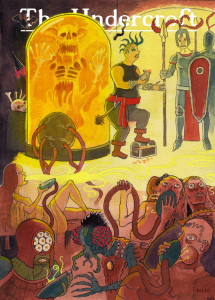 The tenth installment of “The Undercroft” (and final one prior to its only recent reanimation) clocks in at 34 pages (disregarding editorial, ToC, etc.). my review is based on the print copy, which is a staple-bound classic zine (6’’ by 9’’/A5).

This review was moved up in my reviewing queue at the request for a prioritized review via a direct donation.

So, let us start off with a winner: Sándor Gebei delivers Babel Square – a market square that would feel perfectly at home in DCC’s Punjar, Lankhmar, Shadizar or one of the weird metropoles out there, be they of a planar or more mundane variety; the veil is then, and sounds, sights and smells are noted. Various general types of activity by time of day are provided alongside 12 sample encounters, 8 rumors, 20 strange objects to be found, 6 unconventional payment methods (including temporary voice removal, memory extraction via leeches and more), and 7 interesting landmakrs and places add further to it – the only thing keeping this from being a perfect little set-piece would be the lack of a map.

The second article is one of my favorites in the entire ‘zine’s run – it’s title is an edged, wrong-looking glyph-thing, for the sake of the review’s readability called “nameless taint” from here on out. For this is about a taint that infects characters if their players are interested, it is a corruption, wherein not even the abstract glyphs remain consistent, set against the backdrop of the occulted kingdom, fallen to the nameless taint; 4 items from this tainted realm are provided, all interfacing with the crisp and concisely-presented rules, and there are three spells that channel the power of these horrible taints; the article also presents essentially a template that allows you to make husk-monsters consumed by this nameless taint, alongside two notable husks – high-level bosses, if you will. Oh, and the corruption of the characters has 10 long steps – that do provide serious benefits, but also erode your ability to understand names and the like. You lose your identity to it, but you might well learn to conjure the flailing shards of the nameless taint… Not only is the glyph angle cool and unexpected, the article by Luke Gearing also has SERIOUS Dark/Demon Souls-vibes, and is captivating enough to warrant translation into pretty much whichever system you’re actually playing. This one warrants getting the zine on its own, at least in my book.

The shortest of the articles in this installment, Greg Gorgonmilk’s miscellany of 4 different magic items: The dead faerie in a lamp can emit light that not only reveals the invisible, it also renders stone transparent! That’s cool. Even cooler: Knocking on wood snuffs its light – but here, the item is less precise than it should be: Can others knock on wood? Or just the wielder? The item has a second little hiccup: It implies that the wielder must invest hit points in it: “The luminosity will last 1 turn for every (temporary) hit point invested by its bearer.” Okay, does this entail a process? Can the damage be healed? Is the hit point returned if the light goes out or is suppressed by knocking on wood? Not sure. This is an extremely cool item, and easy enough to salvage, but I wished the rules lived up to the cool concept. Tetrograts are minuscule, stationary golems that will decry “It is a lie” when a lie is spoken in their presence. A range for this effect would have been nice to see. The cloak of beards is made of regal…well…beards, and grants you Charisma 18, and those within 30 feet that fail to save against its enchantment are convinced that the wearer is a king of the noblest kind. Serious folklore vibes here – nice! The Quintessential is not an item, but a legend, of a despot who sought to vanquish all differences between people and turn them into a homogeneous neutral state. It’s a solid legend.

The final article herein, penned by Ezra Claverie, depicts the ruins of the elven ship- and submarine yard/officer’s clubs; the tantalizing and strange default setting assumed by the author’s articles makes me once more wish for a fully realized campaign setting, but even without context, this is interesting – for against this backdrop, two creatures are provided – one horrific and subtle, the other weird and grotesquely hilarious, and both are unique and essentially puzzle-monsters – they are complex threats that are not easy to beat, but at least one of these things will need to be bested to enter “The Officer’s Rest”, the ruins of an at-once magical officer’s club, where strange mixology, magical frescoes and more may await. This article was inspiring in the best of ways, and while I wished that the creatures had been presented in a slightly less wall-of-text-y manner to parse more easily, they are unique enough to require preparation anyway. I’d once more like to reiterate: I really hope that we get to see a fully realized campaign setting in this strange post-imperialist world, ravaged by bio-mago-technical warfare.

Editing and formatting are very good on a formal level, good on a rules-language level. Layout adheres to a 1-column b/w-standard, and we get quite a lot of cool b/w-artworks. The stapled softcover is a neat classic ‘zine.

Whereas #9 was all quantity, this issue focuses more on quality: Sándor Gebei, Luke Gearing, greg Gorgonmilk and Ezra Claverie deliver articles that I absolutely adored; heck, I’ve actually used the majority of the content herein in my games, often with blatant disregard for the intended system and some serious conversion work – because the ‘zine is THAT GOOD! Even when I do have nitpicks and complaints regarding rules-precision, these are few and far between, and the strength of the respective concepts? That’s formidable indeed. Add to that the VERY low price-point, and we have a definite winner here. Usually, I’d probably have settled on 4.5 stars for this one, due to its minor hiccups in the rules. However, I just can’t bring myself to do that. The majority of the articles herein simple deserve being called “excellent” As such, my final verdict will be 5 stars, and this does get my seal of approval; it’s one of my favorite ‘zines in the entire Undercroft.

You can get this cool zine here on OBS!

You can get this ‘zine in print (while copies are still available) for the deeply discounted price of £2.50 right now, here on Melsonian Arts Council’s shop.

You can directly support the Undercroft here on patreon!

If you enjoyed my review, please consider leaving a donation, or joining my patreon here. Thank you.