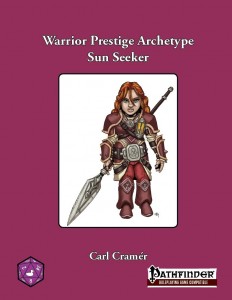 This pdf of the Warrior Prestige Archetype-series clocks in at 9 pages, 1 page front cover, 1 page editorial/introduction (explaining the base concept of the series), 1 page SRD leaving us with 6 pages of content, so let’s take a look!

The class, as presented here, adheres pretty closely to the ranger-frame – favored enemy, progression 3rd level endurance, 1st level track + wild empathy – the dispersal of ranger abilities throughout the levels is pretty solid. 2nd level nets the know direction-based Find Citadel ability – so no, combat style is not part of the deal for this class.

3rd level provides a new ability that immediately makes this version superior to its PrC-iteration – ancestral allies: You choose either companions, allowing her to grant favored enemy bonus to allies, an animal companion or the favored terrain class feature – this level of customization is nice to see and thematically fits the class well. At 4th level, the rune-carved armor is gained and 5th level grants ancestral weapons, with the ability’s damage-scaling being dispersed organically throughout the levels of the class. 6th level nets 1/week Commune, +1 use every 6 levels thereafter. 9th level either grants darkvision or expands it, with the second expansion happening at 14th level.

The SR-granting runes of Resistance is gained at 13th level and 16th level offers path of the ancients. The powerful, mettle-like effect Stalwart is gained appropriately late at 17th level and the PrC’s capstone Call to Arms can now be found at 18th level. The new capstone allows for full speed tracking, standard action attacks versus favored enemies that operate on save-or-die, including the option to instead drop foes via nonlethal damage.

The pdf, as always, provides solid FCOs for the core-races and this time around, sports a sample dwarf at level 1, 5, 10 and 15. The pdf also has a feat that allows for easier stabilization alongside 1/day crit/sneak negation down to a normal hit.

The Sun seeker as presented by Carl Cramér here suffers from a downright sucky PrC -I liked its concept, but the execution of the PrC is all over the place and feels confused. This Prestige Archetype does a better job at making the class feel concise and thematically consistent. That being said, I really wished ancestral weapon, the first active signature ability that could be conceivably moved to lower levels, was there – perhaps instead of some ranger abilities. As written, the class takes a LONG time to become truly distinct. While ancestral allies somewhat mitigates this, one might argue that moving it slightly would have been nice, since it essentially mimics ranger abilities. As written rune-carved armor at 4th level is the first truly distinct ability, 5th level offering the first offensive one. In my playtest, this rendered the class, at low levels, pretty much less distinct than it ought to have been. Higher levels somewhat mitigate this, but still – all in all a solid take on the concept, but it falls rather short of Carl’s better prestige archetypes. My final verdict will clock in at 3 stars.