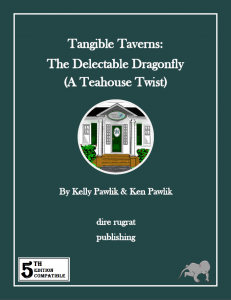 This installment f the Tangible Taverns-series clocks in at 16 pages, 1 page front cover, 1 page editorial, 1 page foreword, 1 page advertisement/SRD, 1 page back cover, leaving us with 11 pages of content, so let’s take a look!

A gorgeous white mansion caters to the ladies of good taste; it is frankly a fact that whomever has two X-chromosomes alongside a certain standing and pedigree should most certainly not be seen slumming in rowdy taverns. Instead, it would indeed be significantly more rewarding for such privileged ladies to visit the Delectable Dragonfly, a tea house of exquisitely good taste, where the gossip of the local elite and rich and powerful coalesces.

And yes, dear ladies – there are delectable additions to add to the menu, which include massages…and everything else a discerning lady might wish for…particularly if her lord has certain…ahem…shortcomings. Prudes around there: You can put away the pitchforks, anything sexual herein is conveyed via innuendo and is absolutely PG. That being said, personally, I applaud this often neglected and stigmatized aspect of the facts of life. Run by Prim, a most charming hostess who was reimagined as a human in 5e and comes with full stats, this place is indeed a veritable oasis of delights – and information: The detailed rumors and events provided further emphasize this. Prim’s 5e-iteration is cool in that her luck-based tricks have been redesigned as several cool lair actions, which I most certainly loved. At the same time, her stats feature a glitch: She can lend a “point of inspiration” – which should probably be a die…and said die is not defined in her statblock either, making said ability not work as intended.

The ruggedly handsome staff comes with well-drawn b/w-mugshots as well that could have been taken straight from a fantastic romance-novel, further underlining this theme. The fluffy write-ups themselves are flavorful: What about a halfling masseur with meticulously clean feet who can feel knots with them? Then, there would be the ruggedly handsome Vadim (with full stats) as well as his devotee/friend Sonia (similarly, with stats) and several regulars provided for a rich array of NPCs to interact with – including the local inquisitor (whose 5e-abilities explain with a unique weakness how she failed to put the pieces together), convinced that a brilliant serial killer is stalking the town. Well, guess what? She is right. She is also pretty much unwilling and incapable of believing the truth…unless it stares her right in the eye.

Editing and formatting are top-notch, I noticed no significant hiccups apart from Prim’s guffaw. Layout adheres to a no-frills two-column b/w-standard. The b/w-artworks featured herein are all originals and well-made indeed. The cartography featured is rudimentary, but serves its purpose and the pdf comes fully bookmarked for our convenience.

I really enjoyed Kelly & Ken Pawlik’s delectable dragonfly – and the 5e-version’s NPC-builds, with copious of unique abilities, rock in a similar manner as those featured among the PFRPG-iteration. While the glitch in Prim’s build is somewhat unpleasant, we do actually get the cool lair abilities, which somewhat mitigates this minor guffaw. In the end, I will hence settle on a final verdict of 5 stars, just short of my seal of approval.

You can get this nice tea house here on OBS!
Endzeitgeist out.