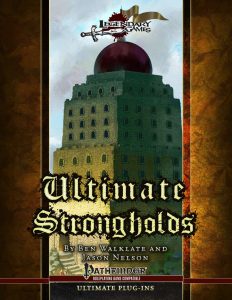 This review was moved up in my reviewing queue as a prioritized review via direct donation.

Okay, so we start with something rather nice, namely a cost differentiation via furnishing quality levels: The supplement introduces 4 new quality levels – 2 below (destitute and poor) and two above (wealthy and extravagant) for rooms, with corresponding effects. Good catch: All rooms take at least a day to make and the cost of a room may not be reduced below zero when skimping on its actual properties. This is just the start, though: The book does something I *really* wanted to get, and that is materials: The book establishes wood as the baseline for room construction and then proceeds to provide a massive table that lists thickness, hardness, HP/inch, costs (in GP and LB), cost of gold and goods per wall segment, and labor/time factors – and the materials are vast: Want that lead-coated lab? Possible. Want elysian bronze or frost-forged steel? Force fields? Well, guess what? Now you can! Did I mention the option to make even stuff from frickin’ viridium? And yes, magical treatment is included. This table is massive, makes sense, and is awesome. Want paper walls? Or ones of frickin’ angelskin or griffon mane? Well, guess what: This has you covered.

The pdf also provides the means for room augmentations: Concealed doors, secret doors, fortifications – really cool! This is a strong start for the supplement indeed!

The pdf then proceeds to do something useful: While I know that my players prefer to *exactly* plan out dimensions of a building etc., I know that not all groups are interested in that sort of thing, so if your group prefers handwaving such details, you’ll still get two different methods that let you quickly calculate the size of a building, one if you haven’t decided on squares for each room, and one that works if you have. This is smooth, and many a table will welcome the increase in speed this offers. Minor nitpick: There is a pg. XX remnant here, but it only would have pointed back 3 or so page, so there’s no comfort detriment here. At a later point, there’s a Table x-5 reference that should instead point to 2-5, but once more, not a deal breaker.

We proceed to cover exterior walls and roofs, including their augmentation possibilities, which include parapets and embrasures, buttresses and more. Windows and the like are covered before the next section that made me smile from ear to ear: MOBILE BUILDINGS. Including walking, rolling, flying, teleporting, etc.! 😀 Yes, now you can make your own Baba Yaga hut! You can make your own anime-style rolling fantasy-tank fortress! And we get more: Dumbwaiters, dimensional locking, extra-dimensional rooms, stable and sealed environments…and yes, of course, fortifications are also covered.

…know what? It’s really funny. The engine presented so far has actually inspired me as a GM to tinker with the material. It has inspired adventure ideas I need to try out. And we’re just 11 pages in at this point.

The book adds another level of strategy and tactics to stronghold creation, in that it actually takes the terrain into account, with material costs by location! I love this. Chapter 1 is already a resounding success, as far as I’m concerned.

Chapter 2 then proceeds to deal with siege warfare, classifying materials by Structure Points (SP), with conditions damaged, breached and destroyed offering some sensible differentiation, and yes, HP per inch are also provided, allowing you to seamlessly run the respective environments in either “level”; the table has the rather nice additional property of actually allowing the GM to judge, at a glance, whether that spell actually managed to make a dent in the wall. That instance of the party using a wand of lightning bolt to blast through a wall? One glance at the table, and an experienced GM is set to go. Siege-weapon assembly with workers required, costs, weight, etc. is also handled: a heavy trebuchet clocks in at 10 tons, for example, and dismantling it requires some serious damage output! From double to repeating scorpions to springals, this chapter once more delivers and put a big smile on my face. Of course, where there are ranged siege weapons, there’s bound to be ammo, so from caustic shots to fetid (manura, corpses) shots to grappling bolts, there’s a lot going on here…and yes, we obviously also have escalade ladders, bridges, etc. Once more, this is a gem of a chapter.

The book then proceeds to talk about how these downtime-rules-level building rules influence the game on the kingdom-rules-level, which includes accounting for the Ultimate Rulership options and the bombardment rules in Ultimate War. Kudos!

Want more fantastic elements in the game? Well, chapter 4 has you covered, presenting exotic materials like bone or ooze as well as elemental stronghold rules such as sky castles or water fortresses, including unique hazards that can help drive home how unique these places are: Staring through a floor of solid cloud/air can be disquieting, slamming into a torrent of water acting as a wall rather painful – you get the idea. Really neat. If you are less inclined towards the elements, and more towards the fey, you’ll be happy to hear about the crystal palaces, hedge forts…or places with hive walls. Or flesh walls. Or web walls. And what about a castle that literally is a ghost/spirit? Well, guess what? Rules included. Awesome.

The pdf then proceeds to introduce the notion of stronghold spells: Spells that (optionally – and I recommend adhering to that) work only within a stronghold to which the caster is attuned over a multi-day process. This pretty lengthy process also allows for the writing of some cool modules: Hold the fortress until the archmage has attuned to the stronghold! Nice. The spells include means to animate artillery, a battering ram like force bolt, and e.g. a very powerful spell that makes e.g. bardic performance apply to the entire stronghold (cool and sensible in fortress combat under the limitation noted before); extended consecration/desecration that applies to the entire stronghold, animating defenders as undead, making the fortress absorb (or emit) light, an extended variant of expeditious excavation, magical seals, creation of cauldrons, warning against aerial assaults (a magical air raid siren)…and there is a mighty spell that makes it really hard to outcast the lord of a fortress, wo gets some serious counterspelling mojo. This last spell is pure gold and makes sense in so many ways. I have read so many PFRPG spells at this point, it’s not even funny. As such, it should be noted that some of these managing to get me as excited as they did? That’s a big thing.

Next up is the castellan 5-level prestige class, which gains up to +3 BAB-progression, +2 Fort- and Ref-saves, +3 Will-saves over its progression, 4 + Int skills per level, and requires both Intelligence and Charisma 13+ as well as multiple skills at 5 ranks…and a serious inventory of the stronghold. (As an aside: I like story-requirements like this.) Castellans get an investigator’s inspiration, treating their castellan levels as investigator levels and stacking levels for the ability, if applicable. While in their stronghold, castellans can move unimpeded in darkness, through crowds, etc.- – they literally know their stronghold like the back of their hands. Oh, and this includes bypassing difficult terrain (if it’s relatively static), traps, and free action opening of doors, including secret ones. Oh, and they can use a swift action to trigger traps they bypass with a 1 round delay. Chasing these guys in their home turf will not be fun for the poor sods that attempt it! They also have a very keen eye for disturbances in their chosen demesne.

2nd level lets the castellan expend inspiration while making a save in their stronghold, adding +1d6 to the save. The castell and all allies at least 2 levels lower gain a +1 morale bonus to atk and damage and a +1 dodge bonus to AC while in the stronghold. These bonuses also apply to skill checks when operating siege engines. 4th level upgrades that to +2 and lets allies who gain this bonus within 30 ft. of you ignore difficult terrain and gain the door trick. You also get to use inspiration as a standard action to inspire competence or courage as a bard (again, stacking if applicable). 3rd level allows the castellan to use their inspiration to duplicate a variety of magical effects pertaining to the stronghold, including some of the new stronghold spells.

At 3rd level, we have a +2 circumstance bonus on all opposed checks in the stronghold, immunity to feat and a +2 morale bonus on all saving throws (+4 vs. mind-affecting), and, if a spellcaster, immediate action inspiration use for counterspelling. This level also allows for object related magics via inspiration-expenditure. 5th level nets Leadership (or an upgrade for it) and the option to teleport  around within the stronghold via inspiration use. I’ve seen a lot of PrCs. This is a great one. It’s focused without losing its theme, it has some seriously cool narrative tricks, and manages to capture the feel of the concept very well. Kudos.

Editing and formatting are very strong on both a formal and rules-language level; with the exception of the XX-remnants noted above I noticed no issues worth complaining about. Layout adheres to the series’ two-column full-color standard, and the artworks provided will be familiar to fans of Legendary Games. Now, there is one thing that made me grit my teeth: This book has no bookmarks. NONE. For a reference pdf that you’ll use time and again, with tables and all; that’s a SERIOUS comfort-detriment as far as I’m concerned. If you only want to go for the pdf, detract a star from my final verdict. Personally, I’d recommend getting print + pdf anyways for this.

Want to know more? Okay, so, if you’re using the kingdom building rules, this s a must-own purchase, but you already know as much by now, right?

Well, even if you are NOT interested in kingdom building AT ALL, if you couldn’t care less, this is STILL worth its asking price. I mean, come on, who doesn’t want to play a badass siege scenario? The castellan PrC can make for a truly frightening boss for a party to face down…or intercept! The stronghold spells will require some serious thinking and tactics even from the notoriously powerful PFRPG adventurer group trying to best a stronghold, and the plethora of siege weapons and their stats alongside the wealth of cool global features for fortresses is useful in regular dungeon design as well.

In short: This is a fantastic purchase even if you really don’t like the regular kingdom building/mass combat rules!

So yeah, this is an apex-level product, Legendary Games at their very best. It’s good enough that I can’t bring myself to strip a star of my final rating for it, in spite of the annoying lack of bookmarks. However, there is one thing the book has to lose, and that’d be my “best of”-tag, which it *REALLY* deserved; for a module, I might have shrugged off the lack of bookmarks, but for a rules-book, that really hampers the utility of the pdf. Hence, my final verdict will “only” be a resounding recommendation to pretty much all fans of PFRPG’s first edition, with 5 stars + seal of approval. For use at the table, get print; other than that, there is no caveat that diminished the unadulterated joy I felt when tackling this book and its content.

You can get this masterpiece here on OBS!

If you found this review helpful, please consider leaving a tip via paypal, or by joining my patreon.