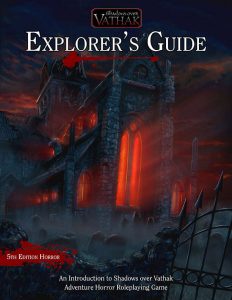 This pdf was moved up in my reviewing queue at the request of a supporter of mine.

So, what is this? This is an introduction to the benighted world of Vathak, and if you’re new to Vathak, think about it as a whole setting of Bloodborne-esque aesthetics: The Great Old Ones are very real and a dominant force opposed essentially by the Church of the One True God, so all those creepy nods towards Catholicism in various media? Easily transplanted to Vathak! Additionally, it should be noted that Vathak also has the good, fun bits that one associates with Ravenloft: Vampires, werewolves, a wandering people often ostracized with supernatural powers…and so much more.

In short: If you wanted a setting with dominant themes of cosmic horror and gothic trappings, Vathak scratches that itch perfectly. (And adapting Vathak material to Ravenloft and vice versa tends to be pretty simple.) The supplement begins with a general overview of the lands of Vathak, and this overview is as focused on the general notions as it behooves a player’s supplement to be: Enough to grant a good idea of what the world is about, but not enough to spoil crucial aspects.

The guide then proceeds to contextualize the classic fantasy races in Vathak (RAW no dragonborn, obviously), and provides racial rules for humans, who increase two of their ability scores by 1, and also choose one culture: Bhriota (proficiency in Intimidation, battleaxe. Handaxe, Warhammer and light hammer), Romni (proficiency in one of two skills, depending on one of 6 clans chosen, and a tool proficiency) and Vindari (advantage on saving throws versus madness and corruption spells, and when you critically hit, roll one weapon damage die again and add it to the total). There is but one issue I have with this section, and it’s cosmetic: racial feature names in 5e are usually bold and in italics, followed by a full stop. In this section, they are not: Just bolded. I might be just anal-retentive, but that sort of thing makes my eyes twitch.

The clergy of the One True Gods also gets an overview that includes proper ways/forms of address. (These titles are German, and I was grateful that the team didn’t butcher the German titles!) But seriously, that sort of thing was so important in real life, more games should take that sort of thing into account. It also genuinely enhances roleplaying. Also: This does mention the most famous Saints etc.

The pdf then proceeds to present three new weapons: The Lord’s Hammer lets you shove creatures two sizes larger than you. Romni Crescent Swords lack special properties, and Vindari Hellraisers are powerful and impose disadvantage on the first death save of those downed by them, but also do not allow you to knock a creature out with them. It should be noted that two of these weapons allow you to change damage types between two types: personally, I think they should have a rule akin to Versatile that at least costs you the reaction or the like to change the grip and damage type, but that may be me.

Editing is very good on a formal and rules-language level. Formatting is slightly less impressive, but still pretty neat. Layout is impressive: Full-color, with historic artworks modified and contextualized with original artworks; this is an aesthetically-pleasing pdf. The pdf comes fully bookmarked for your convenience.

Vathak is BACK! Rick Hershey, Lucus Palosaari and Ismael Alvarez did yours truly a big favor when they decided to bring Vathak to 5e, as I still contend that Vathak deserves much more exposure! The setting is clever, and the emphasis on social realities within the world manages to ground Vathak, highlighting the horrific elements of the setting in a neat way. Having this act as essentially a FREE player’s introduction to Vathak is something I definitely appreciate. So yeah, I like this pdf. I do think that dhampir, hauntling etc. would have been nice to see here, and that some additional notes on roleplaying the status of ethnicities/non-human races and how they are perceived would have been nice, but that may be me.

It may not be perfect, but it *is* a really handy file, and it’s hard to say “no” to a free introductory player’s guide, right? Taking this into account, my final verdict for this pdf will be 4 stars.

You can get this pdf for FREE here on OBS!

If you enjoy my reviews, pelase consider leaving a tip, or joining my patreon here. Thank you!