The Malefactor Base Class 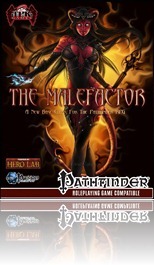 The first original class by TPK Games comes as a 21-page pdf, 1 page front cover, 1 page editorial, 2 pages of advertisement and 1 page of SRD, leaving a total of 16 pages of content for this new base-class, so let’s check it out!

After a second version of the GORGEOUS cover by Anna Rigby (which would make for a nice Dark_Mistress-avatar…), we are introduced to a new piece of short fiction, an extract from Talitha Shadowtongue’s memoirs, herself a tiefling doom herald and malefactor – and, as I’ve come to expect from TPK Games, the fiction is well-written, sets a gritty mood and makes me once again curse not being in the US – otherwise I’d invite the guys from TPK to join my game or try to score at least a con-game: We seem to have similar styles. Oh well. But what is this new malefactor-class?

Fluff-wise, the malefactor represents a kind of people who are, from their earliest childhood, afflicted with a so-called Yla, amoral, intangible chaos-spirits that wreck havoc, misfortune and destruction without being interested in the consequences. Some rare children learn that while these spirits cannot be driven out, the misfortune not averted, they can be channeled and commanded – these persons become malefactors. Malefactors get 3/4 BAB, good ref-and will-saves, no spells, d8, 6+Int skills per level, proficiency with shields, medium and light armor, simple weapons, light crossbows, rapier, longsword, short sword and shortbow and much like other “trick”-classes like the Time Thief, the Luckbringer etc., they are rather dependant on their abilities to make them count, but what exactly are these? Well, first of all, they start off with an aura that gradually increases and imposes a profane penalty on saving throws – to everything around her, without a save. Yes, that includes allies and the malefactor herself – interesting and somewhat reminiscent of 4WFG’s Jinxs-PrC, but not where the class stops. The penalty is also slightly offset by later gaining the wis-bonus to fort-and ref-saves.

The Malefactor also gains a so-called pool of strife, that can hold a maximum of 1/2x her level + WIs-mod strife points. They also gain access to so-called maledictions, one at 1st level and every two levels afterwards an additional one, but more on them later. In melee, she can use a standard action and a point of strife to execute a so-called harrowing strike at a target that is under the effect of a curse or one of her curse-like powers (including hexes, you witch-aficionados out there!). The ability improves to add wis-mod to atk and later damage, inflict bleeding damage, add a second attack and at the highest levels is even considered a touch attack and gets a wicked DC to stop the bleeding. And then there is strife surge – perhaps the coolest ability I’ve seen in quite a time for a class: Every time a being within the malefactor’s aura rolls a natural “1” on a save or attack, the malefactor is energized, reducing the amount of strife her powers consume for one round by 1 to a minimum of 0. Yes. This class actually makes having bad rolls at the table something that can be honestly cheered! And if you’re like me, you have this one player with the most miserable of luck, who is glad to only roll one fumble per session… Among the other abilities the class gets is the one to draw curses unto herself, trying to break them, but suffering potentially from the effects of the curse, whether successful or not. The malefactors can also force opponents to use the lower of two d20-results for a point of strife, wear cursed items without any adverse effects (YEAH!), displace attacks to hit other creatures, reroll natural “1”s for points of strife and finally, a cool capstone ability that renders her immune to curses and makes all “2”s in her aura count as “1”s – unlucky for her foes indeed!

But back to those maledictions – a total of 18 are provided and they have a save of 10 + 1/2 class level + Wis-mod and an increasing range (starting at 20 ft, going up to 60) and last wis-mod rounds. What makes them even more interesting is the fact that each of the maledictions has an option to use a dread escalation as soon as the malefactor has reached 10th level – essentially, an additional cost in strife points increases the effect. Take for example the first one, Apt Curse – on a failed will-save, the victim has a 50% chance to take no action on his/her/its turn. Dread escalate the malediction and we add not only +2 to the DC, but also make the curse permanent. OUCH! Or let your misfortune cling to a weapon that hits you, making it count as a size smaller than it actually is via Benign Weapon. Have I mentioned that Malefactors are essentially the black cats among characters? If they cross your path, you’ll count as flanked until next turn. On the defensive side, the malefactors may also reduce the amount of damage area-spells deal with “Eye of the Storm” and even dread escalate the type of dice down (e.g. d8 -> d6).

Among my personal favourites, though, ranks “Feats of Fate” – while it can be used only once in 24 hours on a given enemy, it prevents said foe gaining any kind of natural or magical healing, while curing the malefactor. Neat, neat, neat. I know one sadistic bastard of a DM who will have his players on the business-end of that one soon… Of course, there are also maledictions to impose skill penalties, make concentration harder, foes slower to react etc., but it is abilities like lightning rod that truly rock: Essentially the Malefactor draws all types of lightning, forcing foes to attack her with the respective spells/effects, while gaining evasion against these attacks – dodging lightning has never been that much fun. (take heed, FF 10-designers, if you happen to read this!). Of coursing stumbling, losing items, losing AoOs are all nice, but e.g. declaring a creature taboo and have foes stunned, or even blinded and deafened for ignoring your sanction is also neat. It should be noted that the dread escalations could have easily been called advanced maledictions and thus space artificially created, but instead this more elegant solution was take. I really like the mechanics and hope to see support for it in future supplements.

5 archetypes are provided as well, though at least for me they don’t necessarily qualify as such and should rather be considered alternate class features – the Moirae can declare an action fated to succeed and treat the ally as having rolled 20 at the task a number of times equal to wis-mod per day. They don’t get the misfortune aura and the save-boost. The Doom Herald gains additional languages, a bonus against mind-affecting abilities and exchange the aura of misfortune for the ability to utter words of doom that force all in hearing distance to save or take the worst of 2 results from saving against hexes and curses. Reavers gain heavy armour proficiency and deal additional damage against foes they have cursed. Kismets don’t get the aura and harrowing strike, but rather can grant their cha-mod as a luck bonus to rolls of allies. Finally, the curse-breaker draws health and spell resistance from breaking curses and can transfer them to other beings.

Before we get to the new feats for the malefactor, we first get a nice little lore-section on information on malefactors. A total of 12 feats are provided, ranging from the ability to use strife to increase your aura, the ability to manifest maledictions as part of melee attacks to further capitalizing on the unluck of other characters in your aura by also gaining str-bonuses to the inevitable extra points of strife, extra malediction to the ability to exclude allies from your aura of misfortune (but also from your potential benefits) and improved surges, we essentially get the basic feat-catalogue to improve the abilities of the class. No feats for the archetypes are provided, though.

The pdf closes with advice on how they work in your campaign as well as the fully stated and hyperlinked statblock of the succubus-descendant Tiefling Malefactor Talitha Shadowtongue.

Editing and formatting is very good – while I noticed some minor glitches, none jarred my reading experience or enjoyment of the class. The pdf adheres to TPK Games 2-column grey layout, utilizes cool fonts and features a gorgeous full-colour artwork of the highest calibre. The pdf is also extensively bookmarked and the sample NPC’s statblock linked to d20pfsrd. The printer-friendly, artless b/w-version has no bookmarks, but since it’s intended to be printed – who cares? The deal also comes with Herolab files of the class and the sample character, so great if you use the software. I honestly didn’t expect much from this class, seeing how much I enjoy RiP’s Luckbringer and well – I should have.

This is a completely different take on (un)luck and the design decisions that went into the creation of the Malefactor are concise, well-thought out and the overall class makes not only for a great team-player, but a fun addition to any table and a godsend for unlucky players. The ability to customize the class and its unique feel and tactics make the base-class a definite winner. However: The archetypes. They have good concepts behind them, but couldn’t they have changed more than, oh let’s say 1 -3 abilities? Personally, I enjoy them when they are more complex, but rules-wise, I see nothing wrong with them.

The feats do a basic job of what is expected and I seriously hope for e.g. a witch/malefactor PrC/archetype/whatever and more complex feats in a future supplement. The favoured class options and the inclusion of uncommon races was a nice addition. The pdf is rather pricey for the amount of content provided, but seeing we get Herolab support, an original, beautiful full colour artwork and due to the fact I can’t discern any truly major flaws, I won’t hold the price-point against this class, especially since the way the class is designed is actually rather innovative. All right, let’s sum it up: Class: GLORIOUS. Gorgeous. Fun. No balance concerns or options that felt bland. The class per se is a total winner. The supplemental material, though, can be considered to fall a bit behind that stellar quality – were I to rate them separately, I’d give the base class 5 stars + seal of approval and the additional material 4 stars. Since I tend to meet in the middle if in doubt, I debated whether to go 4.5 (and round down) or 5 and in the end will settle for a final verdict of 5 stars – innovative design, cool concept and professional execution need and should be rewarded. Well-played, TPK Games! Can we now have a luckbringer/malefactor comboclass? Please?

The Malefactor Base Class is available from: