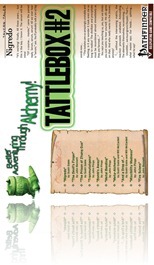 This pdf is 17 pages long, ~1 page front cover/editorial/ToC, ~ 1 1/3 pages advertisements and ~ 1/2 page SRD, leaving us with 15 1/6 pages of content, so let’s check out the first commercial installment of Zombie Sky Press’ Tattlebox!

In case you’ve missed the free pilot issue, Tattlebox is a mini-magazine somewhat similar to our beloved Kobold Quarterly – this installment kicking off with a short narrative called Nigredo before introducing us to Vander Telmane, alchemist (reanimator) 13 on his quest for immortality and his forbidding abode, the tower called “Devil’s Finger”. The problematic and even slightly comedic alchemist is fully stated and comes with adventure hooks as well as original pieces of full-colour artwork. Speaking of which: The Prison of Zhang Guo, a legendary mortar and pestle that not only can make you a master of brewing potions, but can also imprison those pesky outsiders. The legendary tools get their own, neat artwork. Of course, Vander’s research has also yielded some results – 2 new discoveries, one to enhance undead creatures via a special mutagen and the other enabling you to create more alchemical zombies.

Since this issue of tattlebox is all about alchemy, we are also introduced to a new alchemist ability that is called Transmutagen – a form of mutagen that can be combined with it via infusion (but doesn’t otherwise stack): Transmutagens enable an alchemist to have your skin covered with different types of metal , all of which grant different defensive capabilities. A total of 6 different transmutagen-coatings, from humble lead to adamantium are covered by the same amount of new discoveries and enable a prospective alchemist to become faster via quicksilver or become a walking juggernaut – great for potential melee-builds. But ranged alchemists must not fret: 3 new discoveries are provided for them and oh boy, do they rock: From the ability to turn foes into solid gold statues via transmutation bombs to create a bomb that locks a foe in a temporal loop (including repeating taking damage from last round over and over again…) and my personal favourite: Golemites! What are golemites, you ask? Simple, golemites are a modification of bombs, creating them with mini-clay golems that follow your directions! How awesome is that?

Of course, alchemy is also dependent on ingredients and thus we get new coatings – from adamantine to cold iron coatings and the elixirian steel coating, a table provides all the necessary prices to add these new properties to your weapons. Better yet, e.g. alchemical timers, tripwires, a powder to eliminate bad taste to bottled lightning (storms) and a cold-based version of alchemist’s fire and even a mushroom that absorbs light and can release it as a strobe pattern, the respective items are logical, flavourful additions to the repertoire of just about any adventuring group. An new class of items, the alchemical ampule, is also introduced: Essentially, these ampules can be added to items and modify their properties by adding either metamagic effects, making them ignore minor resistances or changing components of the damage types.

For those of you into whacky effects (and honestly, who isn’t), a new table containing 12 different effects deals with the subject of mixing magical potions – from aging effects à la Benjamin Button to turning the PCs into blueberries, Charlie and the chocolate factory, style, the table promises fun galore – I just would have wished it to be longer.

The pdf closes with the new 5-level Fire Scion PrC, which gets +3 BAB, good fort and ref-saves, 3 levels of alchemist-progression, 4+Int skills per level, d8 and improved bombing capabilities, which include disabling devices via bombs, and improved capabilities to use bombs to destroy objects, making this a kind of demolition expert.

Editing and formatting are very good – while I did not notice any editing glitches, it should be noted that the PrC-table lacks the pluses that are usually standard in PFRPG. Layout adheres to a full-colour landscape 3-column format and is generally beautiful and sufficiently printer-friendly, but another gripe of mine would be that e.g. tables for alchemical items are found on different pages than their write-ups, making the pdf slightly less comfortable to use. The pdf comes fully bookmarked. The full-colour artworks are of a very good quality.

I’m a sucker for alchemy and I absolutely love most of the innovations herein – from the endearing, yet rather evil alchemist, the major artefact to the excellent new alchemical items and discoveries, I can’t complain about the balancing of the new crunch herein. That being said, the PrC somewhat feels a tad bit underpowered to me, its niche being very specific, but I gather that for its intended purpose, it does work. In the end, I can definitely say that this first commercial foray of the new series did a great job of making me look forward to future installments – especially if the slight problems with layout and the aforementioned formatting peculiarity are taken care of. For now, I’ll thus remain with a hearty recommendation for all fans of alchemy of 4.5 stars, rounded down to 4 for the purpose of this platform.

So What’s The Tavern Like, Anyway? is available from: