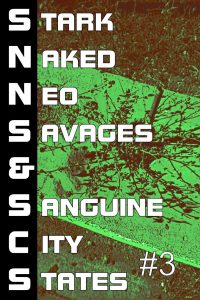 The third installment of this experimental series clocks in at 12 pages, 1 page front cover, 1 page back cover, leaving us with 10 pages, so let’s take a look!

So, in case you’ve been wondering – yes, this is just as experimental and weird as the previous two installments – instead of a standard RPG-supplement, this should be considered to be part poetry, part prose and this time around, it is thoroughly concerned with concepts, not any rules – this is essentially system neutral and should be considered to be a glimpse at a disturbing, psychedelic post-apocalyptic and surreal world. We begin this installment with an expansion of splotch-like overview map of the regions covered so far in the series, with the new locales added.

We move from the forest of dead electric, to the waxy green swaths of rocks, with no plant-life, just sparse rain, naked stone and terrible crystals, an emerald wasteland of poisonous salts – the serpentine stretches as depicted in the prose here is a hostile environment par excellence. Within it, there is “The Only City” – the second strange geography.

“There is only one city. They know this. […]” – only braving death in the wasteland may revoke this hypothesis…and there is not much food; soil is mostly poisonous and so, all inhabitants are both skinny and gourmands…the repercussions, though, are left between the lines… And a brief piece of poetry complements the life there atop an eerily captivating image of a city raised atop a tower, overhanging like a flat disc growing on a treetrunk, with escalators or feeding tendrils hanging low, reminiscent of a deep-sea creature from another world. Those condemned have arsenic bronze locked into their hands, sent to mine in the poisonous crater lake, with lethal poppy as the reward for cooperation – basically, the sword & sorcery forced labor trope, through a shade both weird and familiar. 6 sample and obscure reasons for being arrested in the city (including “Displaying unkind eyes”), and mention that horses aren’t real – in spite of there being a horse fountain. It’s small tidbits like this that generate a whole cascade of ideas in my mind – and that you may well enjoy as well.

Beyond the city, there is also the Burning God. The pdf notes: “Some need to see the face of god, and will accept nothing less than suffering.” – a faded sign beckons in the desert and a strange fire awaits beneath air thick with ozone and religion; it is an AI, a strange thing, pondering a question for ages,a question that led to solipsism and made it evolve into what it pondered, at least to itself, and what else matters? Expectations of generations of pilgrims expecting to suffer has twisted any and all notions of divinity; the entity knows many things and is bad information, filtered through not enough logic circuits – it is, in short, a rather scathing satire if you read between the lines…or, well, you could make it just a literal form of adversary, you know?

So, the third of Evey Lockhart’s pdfs of this series also has no bookmarks, sports the neat, disquieting and weird experimental artworks. It sports the same style of information as the previous pdfs – it is an exploration of weird geographies and as such, it is pretty inspiring…though to me, #3 does not reach the full-blown wonder of #2. The concepts here, both the city and the burning god, are well-executed and interesting; their details are intriguing and smart…but the pdf still doesn’t reach the thoroughly inspiring genius of #2, as both are variants of classic tropes, while #2 was just pure, unbridled creativity. For PWYW, this is very much worth checking out, though! And since it is less weird than #2 and more palatable than #1, it may be the best pdf to check out the unique brand of weirdness this offers for people less familiar with experimental fiction. My final verdict will clock in at 4 stars.

You can get these strange landscapes for PWYW here on OBS!