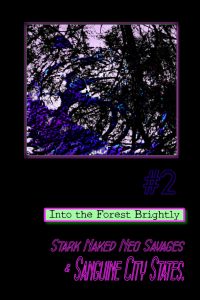 The second installment of this series clocks in at 14 pages, 1 page front cover, 1 page back cover, leaving us with 12 pages of content, so let’s take a look!

This series should be understood as experimental – it is in part artwork and visualized, experimental poetry/prose as well as an almost system-neutral kinda-regional setting. The first pages provides a page, with graphs and splotches of color – these note the locations of #1’s places as well as new ones; the first of these would be the radian forest[sic!] – no, that’s no typo. We get three pictures of a forest, with shifted colors, creating a surprisingly effective, unsettling visual experience that underscores the poetry of the write-ups – take e.g. the outskirts:

Leaves grasp at the sun.

If this inspires you, then chances are good you’ll like this pdf, as it goes on to note green fleeing from the forests, orange ascendant; Rain hates and breaks and jumps circuits, unearthing filaments of old gods and dead alike.

The wire slime, a bio-metallurgical processing colony, is next; the tale of its spread and genesis is covered in a one-page prose-section that is supplemented by rudimentary rules for weapon and tech-degradation. From here, we move to 4 system neutral forest tribes – one has the custom of purchasing adulthood with the willing removal of a body part; another consists of radical nudists; another is led by a stoned space-cadet shaman…and there are people sans eyes and ears that communicate via smells…6 armaments are provided and range from ancestral laser guns to hardened vine spears or weaponized slime. There is no differentiation between damage types, fyi.

And then, there is the cabin & the TV. Why and How is it still here? It is a watertight plastic room with a thin plastic TV. “DO NOT” and “Turn Off” are gouged into the frame; the bullet-point notes of the room paint a puzzling, stark image. Ancient sitcom issues amuse people whose realities include electric slavery and warlords; “Perhaps despair coalesces along certain frequencies. Perhaps secret wishes for an ending manifest physically in two dimensions. An X axis of canned laughter. A Y axis of inchoate sorrow.” – that is powerful prose right there, and it leads in and pertains to the reason the TV must be turned off when broadcast ends – in the visuals of two artworks, it can be found, lurking in the signal, waiting to emerge – the static dragon, impossibly sharp. It gains HD while static persists. It may quickly become unstoppable. It is pretty damn amazing.

Much like its predecessor, this supplement is highly experimental, but it is imho better in every way – it does not require shock value to sell its psychedelic, savage strangeness, instead providing a level of original imagination that felt as though Psychic TV or Throbbing Gristle had written an RPG-supplement; this borders the line of art and gaming supplement and I’m frankly not sure where I’d put it. It is more immediately usable than the first installment and the prose, similarly, has improved in quality. I thoroughly loved the weirdness and otherness of this supplement. If you’re looking for something inspiring (and/or enjoy weird poetry/prose), then check this out right now. My final verdict will clock in at 5 stars + seal of approval.

You can get these weird and wondrous geographies here on OBS for PWYW!