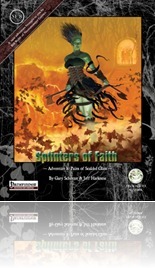 This being an adventure-review, the following contains SPOILERS. Potential players might want to jump to the conclusion.

Still here? All right! The 8th installment of the series once again presents us with a truly distinct and unique temple: The lady of searing waters is a temple shaped like a lotus-flower and built upon the largest one in a field of geysers, resulting in a geyser of scalding water falling down and gathering in the petals of the lotus-shaped temple. After visiting a village at the edge of the volcanically-active badlands, the PCs once again will have to do a favour for the temple: The tube of volcanic glass channelling the scalding water has been compromised by a sleeper-agent of Orcus in service of Akruel Rathamon and in order to get the blessing for the Scepter of Faiths, the PCs will have to replace the broken section with volcanic glass. Fortunately for the PCs, a mine is nearby.

Unfortunately, said mine is now housing more than a few problems: Adherents of the vile teaching of parasite-god father host are trying to build a base in the mines of Honn. Worse, aboleths have started laying siege to the servants of and the cult has lost control of some summoned outsiders from the lower planes that are now hunted down by demonic retrievers. Father Host’s druids and wizards are nothing to be trifled with, either – the druids have the unique ability to transform into vermin-forms and animated Buckets and Ropes make the exploration of the mines rather lethal. The climax at the shores of a subterranean lake featuring aboleths, stone giant guards and even a purple worm make for iconic foes the PCs are sure to remember. And then there’s again the problem of carrying the volcanic glass back to the temple to finally get the penultimate blessing for the Scepter of Faiths.

Editing and formatting are very good, though a bit worse than in the other installments of the series – I noticed quite a few minor glitches. layout adheres to a 2-column standard and the pdf once again has no bookmarks. Once again, the pdf features no transitions from locations to location or even module to module. Once again, no player-friendly maps are provided, but seeing the lack of wilderness-exploration, that’s not as bad. The mines are a stellar dungeon, the temple is excellent in its iconicity and the locations presented rank among the best of the whole series. Even more so a pity that the temple and its surrounding, geyser-studded badlands haven’t been further developed with unique hazards. Apart from this complaint on a very high level, I have nothing to be picky about. The dungeon rocks and the temple is a genuine delight. On the other hand, the pdf has no bookmarks and more glitches than other installments of the series, thus preventing me from rating it the full 5 stars. Seeing that the limitations of the series are not as prevalent in this installment and that the overall writing by Gary Schotter & Jeff Harkness is still awesome, I’ll settle for a final verdict of 4.5 stars, rounded down to 4 for the purpose of this platform.

Splinters of Faith 8 Pathfinder Edition is available from: