Languard Locations: Beyond the Walls (5e)

Languard Locations: Beyond the Walls (5e) 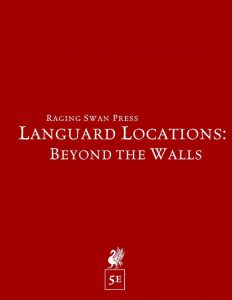 As before in the series, each location does come with notable folks presented in a fluff-only manner. Only race and an approximate level suggestion as well as gender and alignment are stated. In the 5e iteration of the file, these pieces of information point towards the proper NPC default stats. Beyond that, each of the locales does come with one or more specific adventuring hooks, designed to kick off a diverse array of possibilities.

Missed the city supplement? You can find it here!