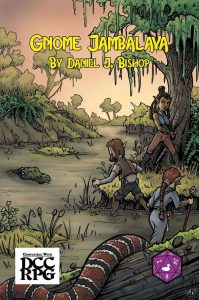 Before we get to the main meat of this supplement, it bears mentioning that this book actually has some serious player-facing stuff, so let’s start with that!

Oh yeah, and because someone is bound to think that:

Ähem…BLASPHEMY! DCC HAS NO GNOMES!! 😉

Well, in case you missed the (properly-credited to Yves Larochelle!) CRAWL!-zine #6, you might not have been aware of there actually being such a race-class, and it has been reproduced and expanded here. Speaking of proper credits: Even suggestions by a user on the Goodman Games-boards are credited! That’s awesome and seriously deserves applause!

In case you missed the class so far: We have d5 HD, 20 ft. speed, training with sling, staff, dart and dagger, and are limited to attaining 5th level. Gnomish magic is restricted to illusion and deceptions, and gnomes can’t have patrons; they get to choose 3 1st-level spells from their list, and cast like wizards via Intelligence, with the exception of the Trick Die, which is rolled to determine the caster level. The spell check is rolled with 1d20 + Trick Die + Intelligence modifier, and spell failure only applies if both dice come up as 1s. Gnome illusions can become “sturdy” if the judge deems it appropriate and the Trick Die comes up as 3 or higher, becoming tangible and potentially dealing an automatic 1d5 damage per level of the gnome; if the Trick Die comes up as 5 or higher, the target must also succeed on a Will save vs. the spell check or flee. Sturdy illusions can cause elemental damage, if that’d make sense. Trick Die starts at 1d3 and improves one step up the die-chain every level, up to 1d7. Each level nets a spell known, with 5th level providing two, and the maximum spell level increases by 1 at 3rd level and every level thereafter. All saves kick off at +1, with Reflex improving the quickest.  Gnome attack bonus caps at +3, and the class uses crit die 1d6 (improving to 1d10) and table I throughout. Action die remains 1d20, with only 5th level adding +1d4 to that; the action die can be used for attacks and spell checks.

Gnomes are resistant to magic, having a 10% chance per level to not be affected by magic; gnomes can also roll the Trick Die to render animals/insects with less than 1 HD friendly; they can see in the dark up to 60 feet, detect the presence of gems (10% chance per level), and apply their Luck modifier to all saving throws versus magic attacks and spells. 0-level gnome information is provided, and we get a 1d14 table of Zero-level occupations.

This class is also supplemented by the scripted illusion spell, which pretty much does what you’d expect.

Beyond the interesting gnome class, we also have an expansion of the awesome faerie animals class introduced back in Faerie Tales from Unlit Shoes: Creeping Beauties of the Wood (seriously, if you haven’t checked out the series and even remotely like dark faerie tales, then get the entire series now…); the expansion focuses on bayou-themed animals, with class table etc. provided alongside a massive alternate occupation/animal type/etc./table.

The supplemental material also includes a d20-table of swampfolk occupations, and also features notes on how to tie it to a selection of other Purple Duck Games supplements (excellent ones), and hints at something I’d rather love to see.

Now, as for the main adventure featured herein, it is a funnel and was tested with gnomes + faerie animals; it should be noted that the module is pretty deadly when run as such, and puts a serious focus on player skill, but not exclusively. It does work well as a 1st level adventure for 4 characters, just in case you were wondering.

The module sports well-written read-aloud text, and a pretty massive array of modular/random encounters, which include infected spoonbills, swampfolk, quicksand, etc., running a pretty good gamut between the grounded and dangerous, and weird. And these only are the random ones.

Structurally, the module is essentially a sandbox of the Blackwater Bayou. The hex map of the bayou is presented in full-color and comes with a keyed encounters noted for the GM; GMs get two versions, one with hexes, and one without them; however, even better, the supplement comes with a player-friendly iteration of the map, which is also presented in proper pngs for VTT-use. A player-friendly version of the final location of sorts is also provided. HUGE kudos, considering that the lack of player-friendly maps is often one of my main gripes with DCC adventures. A hex s assumed to be 1000 ft. and take 10 minutes to traverse, and paths and trails are noted on the maps.

It should be noted that the adventure does a pretty neat job at setting up global effects such as drinking swampwater, and it does have a rather rarely seen vibe, somewhere between twisted fairy tale, classic weird and southern gothic.

Okay, only judges around? Great! So, a meteor…WAIT. I know, it’s a trite old cliché at this point, but a) the module does frankly acknowledge its inspirations and b) the devil’s in the details. In many ways, we don’t have a full subversion of the classic trope here, and instead focus on an execution that lives and breathes a unique atmosphere by virtue of its small tidbits. The “infected” creatures I mentioned above are infected by a weird fungal lifeform spreading from the carcinoma, and there is a risk of fusion with the horrible hellscape these things hail from.

So far, so predictable – but you won’t call the curious bottle witch with her d7 tables of dark and light liquids. These can include the shadows of the slain (who might later rise, when the PC passes the place they’re buried in) or gain other benefits. But, being a witch (she’s illustrated in full color, btw.!), she does demand a price – and these not only note the price and consequence, but also how it is taken, be it soul, shadow or dream. A proper engine for her oracular readings and effects is also provided, just fyi.

From skunk apes and snapping turtles to strange swampdweller villages and beached skiffs, there’s quite a bit to uncover as the PCs need to brave a crossing – and what about that instance where frogs, like in the old Budweiser ad (yep, even I know that one, and I’m from Germany!) croak the name of their demonic patron? (Which also doubles as a chance to take ole’ Bobugbiliz as a patron…)

As the PCs progress, they will find villages of zombie-like individuals controlled by a dread petalhead, vanguard of the potential invasion…and if you enjoy the timeless/dimensionally-confused themes, you’ll geta  chuckle out of the New Orleans 65 miles sign. If you don’t want that angle in your game, you can easily change it, with guidelines provided. This holds true for all such instances, btw. En route, the party also has a chance to potentially experience a deity’s positive influence (and/or end that…), making for a potential cleric (-to-be) angle.

Ultimately, the party will reach the carcinoma, and the nightmarish petalheads, which are also illustrated in full color. And they almost feel tailormade to scare the living hell out of me. You see, I consider sunflowers to be creepy. They move too much for plants, are too tall, and I always feel watched by them. It’s the one truly irrational fear I have. The petalheads? Picture three leg-like things, a stalk, hands, and a sunflower-ish head with an eye-studded mass in the middle. I genuinely can’t look at the artwork for long, and my response at the table would be to scream to purge these things with fire and extreme prejudice.

Ultimately, the party needs to eliminate the strange machinery slowly doing its horrid work, hopefully sending the carcinoma back to its homeplane/world of Hellgoth.

Editing and formatting are very good on a formal and rules-language level. Layout adheres to a 1-column b/w-standard, and the module comes with a couple of really nice full-color artworks. The cartography in full color is neat as well, and the presence of player-friendly versions that are VTT-friendly is absolutely great. Not so great: The pdf unfortunately has no bookmarks, which is a comfort detriment; once the PoD-version goes live, I’ll get that; until then, I suggest just printing out the pdf – its layout makes this pretty printer-friendly.

Daniel J. Bishop’s “Gnome Jamabalaya” is a great example of a supplement that is greater than the sum of its parts; when someone had told be about the individual components, of the relatively grounded aspects, with slowly mounting weirdness and some Easter eggs thrown in, I’d probably have yawned, which makes describing the appeal of this module pretty hard for me as a reviewer.

You see, there are goofy elements here, there are playful elements here; however, these are contrasted with a surprisingly effective rendition of growing horror, which, while not subtle, performs in an effective slow-burn that mounts towards the finale, which btw. can best be solved by smart players.

So, as a whole, I consider this booklet to be a neat success; it is not the author’s best module, but it is yet another example of how a great author can wring gold from even tired tropes. As a whole, I consider this to be a module worth getting if you’re looking for something playful that yet can be run in a truly creepy manner. My final verdict will hence clock in at 4.5 stars, rounded up due to in dubio pro reo and the player-friendly maps.

You can get this cool supplement/module here on OBS!

If you enjoy my reviews, I’d appreciate a donation, or joining my patreon here. Thanks for your consideration!