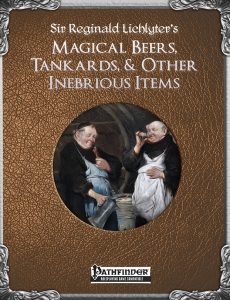 This tome detailing the latest in inebriation-themed objects and concoctions clocks in at 32 pages, 1 page front cover, 1 page editorial, 1 page ToC, 1 page SRD, 1 page back cover, leaving us with 27 pages of content, so let’s take a look!

We begin this tome with basically a rehash of the basic “how to get drunk”-rules from the last tome, though the approach has been streamlined with more precise rules – and yes, the hangover now comes with a proper duration, which renders these rules, overall, more concise. Additionally, the section now sports game-mechanics for a general alcohol addiction as well as three sample addictions for other spirits – though these suffer from a formatting glitch (or unfortunate decision), wherein their headers are white letters on a grey background, rendering the headers a bit hard to read. Beyond that, a sidebox notes Profession (Brewer)’s interaction with the creation of magical ales before diving right into the collection of magical ales the book provides.

And they are, generally, interesting: Acidblood ale, for example, not only grants acid resistance 5 – any bite attack dealing damage to the target also results in the unfortunate attacker being subject to the acidic blood. Altbeer of vareless travel increases overland travel speed, while drinking a brett of softened bones fortifies the imbiber against massive damage and provides a bonus to Escape Artist checks. Beer of Sobriety would be THE drink IRL – drinking it removes one drink from your system. SO AWESOME. Very cool for complex investigations – Blackout Brew: Upon consuming this beer and reaching a certain level of drunkenness, you’ll lose all memory of the events transpired. Yep, this can make for a superb narrative tool. Bloodbeer can instill vampiric hunger in you, while a proper Doppelbock can grant you natural AC and DR, but also make you susceptible to fire. and reduce your movement. (Btw.: The reduced movement rate is accurate – give me a couple of Doppelbocks and I’m much slower… ;P) Potentially problematic can be the happoshu of ki recovery, which allows you to regain ki, usually a limited resource – so depending on the amount of ki-based options, that one may make some trouble in your campaign.

Absolutely evocative – imperial stouts of teleporting toasts – you drink these with multiple people, each toasting to a location. The one that got the most toasts is the destination. Similarly cool – a delicious Schwarzbier that allows you to scry on the target of the toast. Once again, we get a gender-reversing beer and there is also a disgusting one with zombie bits in it that nets you undead anatomy I… and a taste for corpses…

This pdf also contains a whole smörgåsbord of magical drinking containers – from cups that help you with social interactions to a drinking horn that grants you increasing benefits, the more you drink from it in one go. I’m not a big fan of the flagon of healing brew – any alcohol consumed from it heals 1d4 points of damage (slightly annoying, btw. – instead of “1d4”, the pdf often uses “d4” in a minor formatting glitch) – while this should not break any game (you still get drunk, thus limiting the use of the item…), it’s still exceedingly inexpensive healing that can wreck havoc in some low fantasy settings – so take heed here. A jug of everflowing beer…is pretty much many a person’s dream come true. Obviously. And in connection with the aforementioned item…well…does provide infinite healing…Q.E.D. That being said, it has a no-selling-caveat, which is very much awesome. A tankard that can untie ropes and improves saves is nice, though the formatting did overlook the italicization of a spell referenced in the item’s text…still: Cool.

Beyond tankards and mugs, the book also contains an assortment of diverse miscellaneous items – a bag of cheap ale (that the text calls bag of infinite alcohol) allows you to draw forth okay ales…which is cool. But why is there no non-selling caveat this time around? The brooch of slowed metabolism is interesting – it doubles the duration of any magical item or drink with at least one drink of alcohol in it when drunk by the wearer…okay, got that. Sooo…how does this interact with extracts and mutagens? Do these contain alcohol? On the cool side – what about an enchanted coin that makes any drink bought with it a potential agent for charming the drinker? VERY interesting. Gloves that grant you 3 brawling-related feats also should be considered to be intriguing. Oh…and there is a staff that can turn water to ale….which can drown aquatic creatures. Not the worst way to go, I’d wager… Really intriguing: armor enchanted to make creatures swallowing the wearer intoxicated! Can you see the drunk and hungover purple worms barfing in the desert? I can! Oh, and a weapon that inflicts drunkenness on targets can also be pretty funny…

The pdf also sports cursed items – ales that result in instant addiction or that teleport you into very odd locales, flagons that provide a false sense of confidence, curses that deprive you of sleep…quite an assortment here. The pdf also sports an array of alchemical items, including basically an alchemist’s version of AlkaSeltzer, bricks that can be dissolved in water to turn to ale or powdered alcohol. Cool array! The final section of this pdf is devoted to an assortment of alcohol-themed spells, with various inebriation-causing spells, a versatile panacea, a nasty spell that turns beer to poison (what many large breweries IRL cast on their whole supply…)…some nice ones here. I also consider the low-level spell that transforms poison for the duration into inebriation actually not only potentially fun, but also very useful. Magically modifying the drink limit of the creatures targeted is also covered. All in all, a fun selection of spells.

Editing and formatting are pretty good on a formal and rules level – while there are a few hiccups here, they are scarce and show Fat Goblin Games’ increased prowess in these fields. The pdf sports a two-column full-color layout and has several gorgeous full-color artworks. The pdf comes fully bookmarked for your convenience.

Jeff Gomez’ take on a Sir Reginald Lichlyter-book is interesting – this book is less than its predecessor like a Call to Arms-book: It does not feature the same epic scope and amount of fluff/supplemental rules. That being said, the base rules for being drunk are significantly streamlined, which is a good thing in my book. This book, in essence, is pretty much, for the most part, a nice equipment book that should prove to be fun for many a table. While not all items herein are bereft of problems and while there are some hiccups in the details to be found, for the most part, this is a well-crafted, concise equipment book with some pretty nice ideas that deserve being recognized. While not as streamlined as e.g. the current CtA-books by Fat Goblin Games, this should be considered as a valid and fun addition to many a table. My final verdict will hence clock in at 4 stars.

You can get this nice book here on OBS and here on d20pfsrd.com’s shop!
Endzeitgeist out.