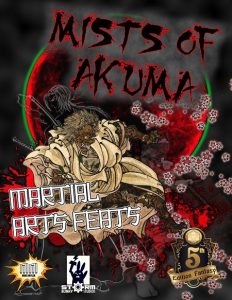 This FREE preview-file for the Mists of Akuma-setting clocks in at 10 pages, 1 page front cover, 1 page editorial, 1 page summary of the setting, 1 page SRD, leaving us with 6 pages, though one of these is devoted to the map of the Soburin continent, so let’s take a look!

The pdf begins with 5 new feats: Metallic Elementalist Warlocks are aligned with the seasonal patron and have an interesting mechanic – they can pay gold to empower their spells, with precise effects depending on the spell’s school (nice!) that being said, the secondary benefit may be overshooting the target a bit – upon hitting a foe with eldritch blast, the target has disadvantage on ALL ability checks for 1 round per damage die. No save, mind you. I consider that a bit too strong. Wooden Elementalists may cast spells without expending them, provided they have enough wood at their hands – this is governed by the proficiency bonus of the character and, as a secondary benefit, we add +1d4 piercing damage per eldritch blast die to the critical hits scored. I prefer this one to the metal one.

Mist Warriors with high Haitokus scores get a very cool retreat action and may use the misty step spell sans components (not italicized in the pdf, btw.). The tertiary benefit of this feat is interesting – you gain proficiency bonus to AC when using the Dodge action, but at the cost of attack disadvantage in the subsequent round. Interesting one! Nature Touched nets you a druid cantrip, resistance to poison damage as well as your choice of resistance to either cold or fire damage until your next rest.

The Swordmaster feat lets you add an attach after criting a foe and killing him with a katana. Similarly, you may follow foes that provoke opportunity attacks from you (here erroneously called “attack of opportunity” in an unnecessary Pathfinderism) or hit missiles asunder as a reaction, provided your damage manages to exceed that of the ranged weapon. Finally, the feat nets you +1AC when only wielding a katana.

Martial Arts Stance feats are subjected to a limitation – you may only utilize a number of these at a given time equal to your proficiency bonus and they may not be used in conjunction with weapons that have the two-handed or heavy property. Fire’s Eternal Vigilance nets you +1d4 fire damage (non-multiplying on crits) and fire resistance. This feat, unlike default feats, can be taken a second and third time, increasing damage. Somewhat off – you may also send forth a powerful heat-aura – that can be used as an action and bonus action. I’m not sure if that means the ability can be used by using BOTH or whether this consumes an action or a bonus action – the rules-language can use a bit of polish here.

A total of 13 such martial arts stance feats can be found within the pages of this FREE pdf – and yes, each of the feats is devoted to a different damage type and follows a similar set-up. As a minor nitpick, the prerequisite line tends to divert slightly from D&D 5e’s standard formatting conventions – not badly, mind you, but it’s here. There are also a bit more typos in here than usual – I noticed “WIsdom”, “increases to 3 1d6” (the 3’s a relic) and balance-wise, e.g. the Stout Boar allowing you to ignore basically all difficult terrain or terrain movement costs, provided you make an attack at the end of your movement, is pretty powerful – RAW, this lets you mow through damaging terrain sans being harmed, which probably is not the intent of this one. It should be noted, though, that quite a few of these feats have a cool set of visuals – icy petals and telepathy, two name two.

Conclusion:
Editing and formatting are good, though not as good as in previous Mists of Akuma-teasers – this one has a couple of glitches that could have been caught. Layout adheres to Mists of Akuma’s two-column full color standard and the pdf sports the classic public domain artworks we’ve come to expect here – they actually do a rather great job here. The pdf comes fully bookmarked for your convenience.

Mike Myler’s feats contained in this FREE book are interesting – while the stances basically do similar things and could imho use a bit more internal variance, the overall impression I have of this pdf’s content is a positive one – there is a lot to like within these pages….and it’s FREE. Free is hard to beat indeed. In the end, I will settle on a final verdict of 4 stars for this one, worth downloading, but not as intriguing as the first two such preview-pdfs I covered.

You can get these feats for FREE here on OBS and here on d20pfsrd.com’s shop!

You can support this massive KS here!