Sailing Aboard the Widow (5e) 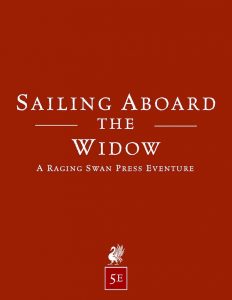 The pdf provides pretty detailed information about the crew and NPC passengers (6 NPCs in total, with information on background, personality, secrets and read-aloud text for them); said NPCs do list references to 5e’s default NPC-roster, which means you have full mechanics arrays to reference if required.

Anyways, another important thing to note would be the system-integration: Raging Swan Press publishes their content for 4 systems as per the writing of this review, and that sometimes hurts the execution for a given system. At least for the 5e-version of this eventure, I am happy to report that this is NOT the case here. While I would have liked to see a sidebar dealing with auras and troubleshooting “detective-magic”, the module actually does a better job pulling off a mystery than many comparable modules I’ve seen, and its 5e-conversion is not simply “skin deep”; it actually uses proper phrasing and checks.

Now, usually, I’d penalize the module for the lack of player-friendly maps…but it genuinely doesn’t deserve it. This is a great change of tone and pace, particularly for a game like 5e. I adore this, and considering the limited page-count and budget it had to pull off its excellence? Impressive indeed.

You can get this cool mystery module here on OBS!

If you liked my review, please consider leaving a tip via paypal, or joining my patreon here. Thank you.