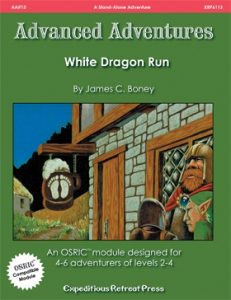 Now, as always for the series, we have OSRIC as the default old-school rule-set, and as always for the series, we deviate from the conventions and have magic weapons not italicized, but bolded, and similarly, spells are not italicized either, but bolded. The adventure is intended for level 2 – 4 characters, and a smart and well-rounded group is definitely recommended. The pdf does not offer read-aloud text for its environments.

That being said, “White Dragon Run” is a departure from what we’ve seen so far in the series, in that it is essentially a hex-crawl wilderness sandbox. In case you don’t know what that is – the adventurers basically travel through the wilderness, encountering beasts and finding unique areas, dungeons, etc. – it’s basically a form of free exploration through a region, somewhat akin to an open-world game. The respective regions surrounding the village of White Dragon Run show that it’s a borderlands type of village, in that it’s pretty much the last stop before the wilds. In the Southwest, Lathergrave (or Lathargrave – depending on whether you believe text or map) Forest can be food; North of the village would be the Mimir Woods, East to South-West of it the Auranas Woods. Between these, the rivers have cut into plains, and beyond the latter forest, there would be the hills known as “The Skaths” that grant the region its name: The Skathernes. In the West, beyond these hills, the majestic Mountains of Xur arise.

Auranas and Mimir Woods share a table of random encounters, with a mix of humanoids and minor fey taking up the majority of the entries, with a few zombies and the obligatory wolves sprinkled in. These forests are dangerous indeed, and stand in sharp contrast to the significantly less lethal La/ethergrave Forest, where the most outré encounter would be giant blowflies. Ew! The first two forests also get their own table of random encounters for the night time, where you won’t encounter fey, but where some of the more dangerous predators and humanoids roam in larger numbers.

That is not to say that the vicinity of the eponymous river that provided the name for the village is safe – quite the contrary! Crocodiles, giant poisonous frogs and large packs of wolves render the area beyond 1 mile of the village very dangerous…but the Skaths are actually even tougher: Here, pretty significant raiding parties can be found, and at night (the Skaths also get separate daytime and nighttime tables), the undead roam in dangerous quantities. The wilderness section also comes with a mini-generator of sorts that lets you sprinkle in dead bodies, random camps and ruins throughout the landscape. No random encounters table is provided for the Mountains of Xur, and it should be noted that PCs should think twice before exploring ruins – they are either occupied or haunted 50% of the time, and both translate to some seriously tough challenges. 1d3 wights or a poltergeist can and will TPK a group of careless adventurers.

While these tables may not look like much, they do play better than they read and facilitate emergent storytelling – encountering 2-16 wolves at night can result in a TPK if the PCs aren’t smart and you roll up a lot of wolves; similarly, stumbling into multiple quicklings in the Mimir Woods can be a rather humbling experience…and when 2nd level adventurers encounter a band of 8 worgs in the Skaths, they’d better have a plan B ready…or replacement characters. So yes, these encounter-tables paint a picture of a harsh environment, and do so rather well.

The village of White Dragon Run itself is fully mapped (no player-friendly, unlabeled map included), and comes with a total of 20 rumors. The village is defended by a garrison (and you get a list of HP so you can track who falls) that keeps the dangers of the wilderness at bay, led by Sir Kallan, who is also the de facto leader of the Triune that governs the village: In his absence, the Triune can’t meet. The other members would be Landan, a paladin, and Janra, the village’s cleric – these two do have appointed replacements, should they not be able to attend a Triune meeting. Cool, btw.: Janra has the Wide Book of Genth, a valuable tome, and the back of the module does contain an appendix with some fully-presented excerpts from it! Nice one! The village also has its resident magician, who is commonly known as “Smoke”, and the village does have its jeweler, a retired soldier, a shop – you get the idea. Nice here: percentile chances for having things in stock are provided.

I also really enjoyed that every single building in town actually gets notes for how it’s constructed, the condition it’s in, the number of occupants and occupations of the folks that live there. It may be a small thing, but it can really aid the GM to bring the village to life.

One building is fully mapped, and that, no surprises there, would be the one that is most crucial for most adventurers: The tavern. The “Twelve Toes Inn and Tavern” (so named because the proprietor indeed has twelve toes!) is the pulsing heart of sorts of the settlement, and it does note the chances of meeting a given NPC with a percentile value for daytime and nighttime as well.

As a whole, while White Dragon Run certainly may not be the most extraordinary village out there, it manages to feel plausible, with the percentile charts, random encounter tables for the wilderness and details provided rendering this part of the supplement a success. It’s not a genre-changer or the like, but it is a well-presented execution of a classic environment.

The last 5.5 pages of the module, then, do present two more detailed locations – small dungeons, if you will.

In order to discuss these, I need to go into SPOILER-territory. Potential players should hjump ahead to the conclusion.

All right, only GMs around? Great! The first of these would be the “Gray Temple”, and abandoned edifice to the evil god Gaevud, a ruin of a granite structure somewhere in the Skaths. Today, vermin nest there, and this is represented by the random encounter table provided, which features giant lizards, giant rats, huge spiders and giant ticks, as well as a couple of humanoids. Indeed, the outer chapel, pretty much the first encounter-area of the temple, already has the potential to have the PCs surprised by no less than 8 giant spiders. If you haven’t learned to be careful via the dangerous wilds, this will drive it home. All in all, this is basically an exploration of an old ruin – though there are plenty of mundane pieces of equipment to still be scavenged herein – which is great for the notoriously-broke low-level adventurer…oh, and particularly perceptive PCs may well find a hidden room that hasn’t yet been looted and found…though, alas, the undead occupants may well object to it being looted… I liked the sense of dilapidation that this complex sported – it is something we don’t get to see that often. At the same time, I do feel that this would have benefited a bit more from some details regarding the long-vanished religion; more details for the iconography etc. to be spliced into the ever-present ruin….but that may have been intentional here.

The second complex presented would be The Forgotten Outpost – an underground complex that once served as a waystation for the Count’s men. A decade ago, it was overrun and sacked by humanoids, and today, it acts as a haven for a particularly vicious band of brigands. Clearing them from the outpost to potentially make it usable once more could really help the PCs getting Sir Kallan’s favor. Bandit HP are provided in a way that makes it easy to check them off, and the complex itself is a straight-forward extermination mission, unburdened by much in the way of hazards or the like…for the first 12 rooms, that is. A slight criticism would be that the bandits remain comparably pale – they don’t really have a proper response strategy or the like – compared to Advanced Adventures: The Curse of the Witch Head”, that aspect is weaker than I hoped it’d be. The interesting aspect of this complex is one that the PCs can potentially miss – there are quite a few rooms that haven’t been found by bandits, hidden by secret doors. Here, a forgotten, undead menace looms, and a room that is haunted can make for a rather creepy experience. I did like this (and the option to find a significant weapon cache) here, but as a whole, the complex still is basically something most GMs could improvise.

Editing and formatting are good on a formal and rules-level, with the by now almost traditional formatting deviations. Layout adheres to the old-school, two-column b/w-standards of the series that evoke a proper, old-school flair. The artworks within are b/w and rather nice indeed, and the pdf comes fully bookmarked for your convenience. Cartography is solid and b/w, but no player-friendly versions are provided.

James C. Boney’s “White Dragon Run” is a challenging little hexcrawl that can provide a surprising amount of game sessions. Courtesy of the danger of the wilderness, there are quite a lot of stories that will simply happen organically. And chances aren’t bad, particularly if you tackle this at 2nd level, that one or more PCs…or groups of PCs, will find their grisly ends in the Skathernes. The challenge is a central part of the appeal here, and indeed, the village is also well-presented. While I would have enjoyed a bit more conflict-potential to be baked into the settlement, as presented it makes for a point of light, for a fragile haven, and fills its role in that regard nicely. The hex-crawling section of this module, in short, should be considered to be a success, particularly for those among us that enjoy a down to earth and somewhat gritty aesthetic. I like that not everything is cluttered with magical things here – it grounds the experience and makes encountering the fantastic more remarkable.

That being said, the two mini-dungeons provided in the back of the book fall a bit short of what I have seen the author produce so far. The first dungeon does succeed at its goal, and while it’s not the most remarkable of places, it turned out to be enjoyable. In direct comparison, the second mini-dungeon feels like the less inspired, low level lite-version of his really enjoyable and cool “Curse of the Witch Head.” With a defense strategy for the adversaries, and perhaps a slightly more meaningful impact for finding the less obvious parts of it, this could have been a much more compelling expedition. So yeah, in direct comparison, the two brief dungeons did not exactly blow me away.

How to rate this, then? See, here things get a bit tricky. While I did enjoy the settlement and rather deadly wilderness, the two mini-dungeons included are simply less exciting. And when compared to other adventures that have received 4 stars from yours truly, this simply isn’t wholly there – it needed that little bit, that extra oomph in the dungeons, perhaps a couple of mini-quests in village and wilderness, to truly shine. As such, my final verdict will be 3.5 stars, rounded down for the purpose of this platform – a solid release on the positive side of things.

You can get this adventure/region here on OBS!