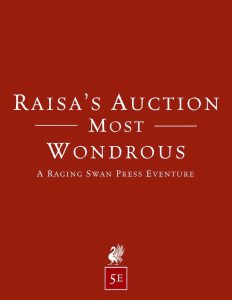 The supplement begins with a brief run-down of the notable NPCs working at Raisa’s—fluff only, as usual for Raging Swan Press; and as usual for the 5e-versions, we do get references to the standard NPCs, for all but one of the NPCs. This automatically renders running the auction easier. Why? Because you can have those Deception vs. Insight rolls, that Intimidation roll versus a NPC-bidder to step down. This makes gamifying the auction easier in the 5e-version than in all other iterations. (The one NPC sans reference statblock would have warranted values, though…) 3 hooks and 12 whispers and rumors are provided as means to lead into the eventure, and as usual for Raging Swan Press supplements, we also get this nifty list of minor events (12 rather detailed ones this time, taking up ½ of a page) that help an environment feel alive.

This is a clever way of handling an auction; sure, it requires a bit more GM mojo and prep-work than the previous eventures, but it certainly has its priorities straight and execution down. The prices of the items have been adjusted accordingly, and actually tends to gravitate to the lower end.

Creighton Broadhurst’s take on roleplaying-centric auctions is precise, executed in a clever manner that prioritizes the right things, and as a whole, represents a supplement I really, really like. And in the 5e-version? That enhanced playability aspect, more or less coincidentally granted by the referenced default statblocks? It adds tremendously to the experience of running this fellow. And one NPC where one has to (perhaps) improvise a skill/ability score value? Not enough to penalize this supplement. In direct comparison, this is the strongest iteration, and gets 5 stars + seal of approval. Certainly, a pdf worth the low asking price.

You can get this cool event here on OBS!