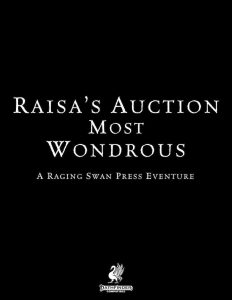 The supplement begins with a brief run-down of the notable NPCs working at Raisa’s—fluff only, as usual for Raging Swan Press. It’d have been nice to see this reference the default NPC-roster of PF2. 3 hooks and 12 whispers and rumors are provided as means to lead into the eventure, and as usual for Raging Swan Press supplements, we also get this nifty list of minor events (12 rather detailed ones this time, taking up ½ of a page) that help an environment feel alive. Now, as a minor complaint, the whispers and rumors section doesn’t account for critical successes and failures, but know what’s a plus? Pricing. The PF2-conversion actually does correctly calculate things like silvered weapons and accounts for the proper pricing structures, even in story-centric curios.

This is a clever way of handling an auction; sure, it requires a bit more GM mojo and prep-work than the previous eventures, but it certainly has its priorities straight and execution down. So, all great? I’d really have enjoyed getting some unique items for PF2; considering how PF2 magic items don’t take up too much space, it’d have been nice to see a few new ones for the young system.

Creighton Broadhurst’s take on roleplaying-centric auctions is precise, executed in a clever manner that prioritizes the right things, and as a whole, represents a supplement I really, really like. I don’t love it unanimously, but I do think it’s superior to the PF1 and system neutral version, primarily because the system is young, the execution solid, and there is simply less to demand from the pdf in this iteration. That being said, actually gamifying some parts of the bidding by referencing NPC statblocks and/or relevant values would have been appreciated. As such, my final verdict will round up from 4.5 stars.

You can get this auction here on OBS!