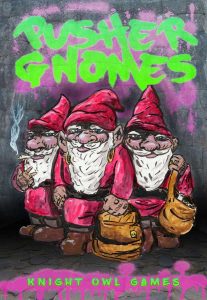 So, first things first: Pusher Gnomes, as depicted here, are situated in Knight Owl Games’ Meatlandia-setting (review forthcoming), and the vast majority of the gnomes encountered in the setting belong to this trade, which stirred up no small amount of resentment. As written, they, flavor-wise, sport a significant distaste for meat-magic and the information contains quite a few references to Meatlandian specialties, though it should be noted that the meat (haha!) of the pdf can be used sans access to the big book.

The Pusher Gnome class gets – 1 Str and Wis, +2 Dex, infravision 60 ft., magic resistance (all saves versus made are made at +2), 2 in 6 digging skill and a 5 in 6 chance to detect grades/slopes. They gain 1d4 HD and the class progression caps at 12th level and 450 K XP, with 11th and 12th level no longer providing new HD. Pusher gnomes save as thieves/rogues/specialists and have no armor restrictions. As they are Small, weapon use is restricted, though. They gain +1 to hit versus kobolds and goblins due to racial hate and +4 to AC versus large or bigger creatures. Their fighting ability remains at 1 for the first 3 levels, then proceeds to increase every even level – personally, I would have preferred that aspect to be codified more precisely.

That being said, the eponymous gnomish drugs that they create is interesting – you consult a table, then add the bonus (based on the class level, up to +21 at 12th level) to the DC…as well as Intelligence modifier. The drug creation system is pretty simple: Ability score modifiers net an increase/decrease of +2 to the DC for every point change. While the intent is clear here: (Decreasing one stat for a lower DC, increasing abilities = higher DCs), the rules-language still could be more crisp here. This same complaint can be fielded versus to hit, damage, AC or save modification, which is based on a point-for-point ratio. Additional attacks cost +3 DC. Skills can be enhanced, taking LotFP-style as well as percentile systems into account. Spell-duplication costs spell-level times 3 in DC-increase. Alchemy kits yields +5 to the check, labs a whopping +10. Help when crafting imposes cumulative -1 penalties per helper.

Durations range from instantaneous to 24 hours (DC 1 – 13 as basis) and the smaller the hit size, the smaller the DC. Different types also have different DCs and delays of the effects can also influence the final DC. Big plus: The system knows pretty diverse degrees of failure, differentiating 4 types of fumbles when making these special drugs, depending on by how far you miss the DC. 6 fumbles are also included…as are 20 side effects, which help you decrease the DC by -5 per side effect you’re willing to take. Each drug should have ingredients equal to the DC, btw. – these have a base value of 1 GP…which basically constitute the only limiting factor of the system. There is no cap regarding number of attacks, attribute bonuses or the like, making this class a min-maxy nightmare of potent effects. Similarly highly problematic would be that the pdf fails to specify how long it takes to make a drug and when it’s done – only after resting? Any time? Do more complicated drugs take longer to manufacture? No idea.

The pdf concludes with 4 sample drugs.

Editing and formatting on a formal level, are very good. On a rules-language level, the system is RAW non-operational and requires a) nerfing by the referee and b) some serious decision-making regarding its base way of operating. Layout adheres to a nice-two-column standard that is pretty printer-friendly, with a few colored highlights and solid full-color pieces of artwork. The pdf has no bookmarks.

Wind Lothamer’s pusher gnomes are evocative and often sport some precise, surprisingly precise, tidbits – but at the same time, the gnomes, alas, are pretty opaque in the way they’re presented. The rules-language lacks some necessary pieces of information and is a long stretch from what I’d consider to be sufficient, even in OSR-terms. That being said, this should not be taken to mean that this is all bad: The basic premise of the system works as written and while the class desperately needs a scaling potency cap for drug-effects to maintain balance with other classes, it can still make for a pretty interesting supplement to build upon. Well, that, and the pdf is PWYW, which allows the customer to check this out and pay a price that’s considered to be appropriate. While, in my opinion, this is worth checking out, at least (particularly when contemplating Narcosa!), I still can’t rate this higher than 3 stars.

You can get these gnomes here on OBS!