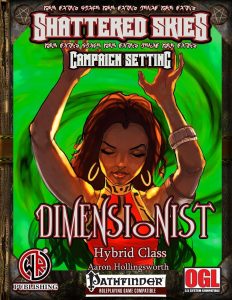 So, what is the dimensionist? Well, it is a hybrid class of kinteicist and witch; chassis-wise, it receives d8 HD, 4 + Int skills per level, proficiency with simple weapons and light armor and may cast dimensionist spells while in light armor without suffering arcane spell failure. The dimensionist gets spellcasting of up to 6th level and employs Intelligence as governing spellcasting attribute. As an Int-based caster, the dimensionist must prepare her spells in advance and spells are taken from custom spell list the class gets. The class gets ¾ BAB-progression as well as both good Fort- and Will-saves. The class gains a familiar and it is an important aspect of the class, acting similarly to the witch’s familiar, though with an even further increased potency.

You see, theme-wise, the dimensionist is about non-euclidean math, strange dimensional distortions The familiar gains a ½ natural armor progression and increases its Int by a whopping +15 over the course of the 20 levels of progression. The dimensionist gains the benefits of Skill Focus (Knowledge (Endgineering)) while the familiar is within arm’s reach and the familiar is creepy – as such, it takes no penalty to Intimidate checks due to its size and while within one mile of one another, both dimensionist and familiar receives a +4 morale bonus to Intimidate checks. Spells or wild talents with a target of “you” may be shared and provided as a touch spell to the familiar. Starting at 3rd level, the familiar may deliver touch spells and at 5th level, it is under constant blur (no CL given to suppress, though one can default to Su-standards…), which upgrades to displacement at 15th level. (Again, not italicized properly, again, CL would be appreciated.) 5th level yields speak with master, 13th level scry on familiar.

The familiar is btw. an aberration: Character level of the master is used for HD, it has ½ the dimensionist’s hit points (disregarding temporary hp) and uses the master’s BAB as well as either Str- or Dex-mod for BAB-purposes. The familiar uses its base saves (Will +2, others +0) or those of the master, whichever is better, but does not share the master’s ability score modifiers for saves. This section looks a bit weird to me – it references “new familiars presented here”, which are not included in the pdf. At first level, the dimensionist also chooses a patron from the witch patrons, adding a patron spells at 2nd level and every two levels thereafter to the spells known.

Now, the class has pretty much two defining signature abilities, the first of which would be Non-euclidean intrusion, which is gained at 3rd level and may be used 3 + ½ class level times per day, teleporting the familiar into enemies! Yes, this is cool! On an annoying side-note: It is not properly formatted, lacking the proper bolding for its header. This teleportation effect inflicts scaling bonus damage, inflicting the familiar’s primary natural attack plus +2d6 precision damage to the target, which increases every other level by +1d6. Touch spells the familiar holds are also delivered thus. In the aftermath, the dimensionist must succeed a CL-check versus DC 10 + the target’s CR – on a success, the familiar teleports to his side; on a failure, it remains adjacent to the target creature, placing it at risk – which is btw. the reason it gains these miss chance granting traits. Alas, there are a couple of issues with this ability. One, it should be defined as a conjuration [teleportation] effect. Two, the emergence of the familiar from the target creature – does this movement provoke AoOs? Three: What is the frickin’ range of the ranged touch attack? Four: How does this interact with the familiar’s action economy? Five: What action is this? RAW, it has no range and requires neither line of sight, nor line of effect. As a capstone, the dimensionist is always under the effects of blur (again, sans CL for suppression purposes), but it can be suppressed or activated as a standard action and automatically succeeds the callback CL-check and may instead port herself via non-euclidean intrusion, attacking with melee instead of being restricted to natural attacks. Combined with all the other tricks of the class, the ability, while damn cool in theory, may be a bit much.

Now, the second ability would be also what provides some differentiation between dimensionists: These abilities are called “Distortions” – any regular (I assume that means “non-patron-exclusive, non major/grand”) hex qualifies and so does any utility wild talent. However, the dimensionist does not gain Burn – instead, a spellslot may be expended for the use of a wild talent that requires Burn, with the spell-level being equal to or greater that the Burn required. In order to qualify for a utility wild talent, the dimensionist’s level must at least by twice that of the utility wild talent in question. Thirdly, the character may add a spell from the witch-list to her arsenal of spells known. A distortion is gained at 1st level, 2nd level and every even level thereafter. And at 5th level and every 5 levels thereafter, the dimensionist may replace a known distortion with a new one. A distortion’s save DC is 10 + ½ class level + Intelligence modifier, activation action is a standard action and several distortions modify non-euclidean intrusion – only one such modification may be added to a given use of the ability.

While we’re speaking of these: Included are the options to choose one of the 4 base energy types and changing the precision damage inflicted by non-euclidean intrusion to that energy type. This damage is btw. still not multiplied on a critical hit – kudos for catching that one! Not all distortions are interesting, though: Gaining Skill Focus (Profession) (I assume in a chosen profession) and being able to use Int instead of Wisdom as governing attribute for the skill doesn’t exactly make me holler with excitement. Unfortunately, this section is also where, obviously, some actual formatting would have helped the class. Spells are not italicized throughout the section, attribute-references are lower-caps…you get the idea. The rules-language here also does not reach the same level of precision as during the rest of the presentation of the class and sports some questionable decisions. There is, for example, a distortion that changes “cone” spells into a 10 ft.-line, increasing the save DC by +2, while also increasing the casting time by “one grade” – while the latter is at least explained, the issues should be evident nonetheless. Don’t get me wrong – I do actually *like* this – but I wished its rules-language had been tighter.

On a more positive side, making non-euclidean intrusions cause bleed damage is cool (though the Heal DC should imo scale). Adding the deadly special weapon quality as a standard action is cool, particularly with (thankfully non-stacking) threat range increase, but the pdf fails to specify how long the ability lasts – unless it’s permanent, as it RAW is, which is BROKEN. One dimensionist, infinite deadly weapons at no cost that also have better threat ranges…we need some serious restrictions here. This becomes particularly sad if we take a look at a high-level distortion that nets a variant of mage’s magnificent mansion in creepy, with an open door…a place that can be entered by anyone…and that nets the dimensionist phantasmal killer at-will as an SP while inside. Potent, yes, but at 18th level, I can live with this. Targeting foes with confusing mathematical conundrums (that can be solved via Knowledge (engineering)) makes for an interesting option, though not having to look up the action such a check take would have been nice. I am not really sure how a cone doubling in width, but not length, translates to the grid – an example would have been nice there. Adding blink to withdraws is also rather cool!

The pdf also includes a new feat, which nets +1 distortion and two archetypes. The first would be the Black Book Devotee, who transforms her “witch spells into divine spells” at certain levels. Problem here: The dimensionist does not have witch spells. It has dimensionist spells. Unless this is supposed to only apply to witch spells gained via distortions. Instead of taking a distortion, the black book devotee can choose 2 divination spells known she can cast and gain immunity to them. Yay? With the restricted spell-list, that’s tough. The devotee’s familiar also gains the chaotic and “entropic subtype” and features rebuild rules for that as well as scaling DR and acid/fire resistance, but loses the 1st, 6th and the 12th level distortion for this. In case you were wondering – there is no such thing as an entropic subtype, though there *IS* an entropic creature simple template.

The second archetype would be the hidden edge, who gains proficiency with martial weapons, but loses light armor proficiency. Instead of non-euclidean intrusion, weirdly at 1st level, the archetypes receives an ability to ignore one point of worn armor bonus or natural armor bonus when attacking a target within 30 ft. This increases by +1 bonus ignored at 5th level and every 5 levels thereafter, with 20th level adding free brilliant to all attacks thus performed – all in all, very clunky and yes, the quality is not italicized properly. Instead of 1st level’s distortion, the archetype gains the rogue’s fast stealth, with 4th level providing trackless step that instead works in urban and similar non-natural environments. This replaces 4th level’s distortion and 18th level’s distortion is replaced with Hide in Plain Sight. Not that impressive.

Editing and formatting are the big issues of this pdf. On a plus-side, for the most part, the rules-language is precise in the basics; however, once you take a closer look, the lack of range for the distortion and similar rules-language issues start cropping up big time, requiring serious GM-fiat. Similarly, the formatting of the pdf is not good. Artworks are solid full-color stock pieces and the pdf sports a 2-column full-color standard. The pdf sports basic bookmarks and comes with a word document for copy purposes– which should be applauded, for the pdf has copy and pasting disabled.

Aaron Hollingworth’s dimensionist is a pretty cool class, idea-wise – the very “Dreams in the Witch House”-y vibe is fun and porting a familiar to rend foes asunder is one neat angle I really enjoy. At the same time, this pdf’s crunch would have needed a capable rules editor to polish it to the point where its more ambitious abilities work smoothly. For the most part, the material works, but closer examination yields some seriously nasty hiccups in core abilities, glitches that compromise how it works, which most definitely should have been caught. The formatting issues are also too many for such a brief pdf.

At the same time, the dimensionist, provided you’re willing to do the fixing, does feel rather unique and has some solid ideas and themes; it has its own identity. How to rate this, though, is a pretty big problem – you see, from the rules-integrity side of things, this is closer to 2 stars than 3…but concept-wise, if the abilities all worked as written, this would be at least a 4 stars-file. It depends on your tolerance for material that needs cleaning up. Ultimately, though, I can’t rate this higher than 2.5 stars with the issues it has – it simply doesn’t work as written and with the issues, I can’t round up.