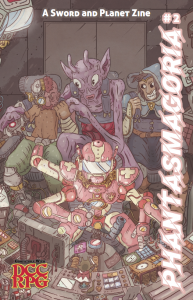 The second installment of the Sword & Planet-‘zine for DCC clocks in at 34 pages, 1 page front cover, 1 page back cover, 1 page editorial, 2 pages of SRD, 3 pages of room for notes, leaving us with 26 pages of content, so let’s take a look!

This review was requested via direct donation as a prioritized review, though said person has been very patient with me getting this done. Thank you.

My review is based on the pdf-version; I do not own the print version.

So, easily the best thing in the deeply-flawed first issue of this ‘zine was the relative rules-lite proposed system of spaceship rules, which has been revamped, streamlined and expanded in this supplement.

We still have 3 ability scores:

-Luck can be burned to improve rolls

The system assumes a hex-grid and roll for initiative as usual; they get 5 + Evasion modifier Action Points; each Action point can be used to turn 60° (one side of the hex), or to move one hex forward. Alternatively, two Action Points can be spent to move backwards one hex or execute a maneuver. The transparency between ship and characters is interesting: The Pilot steers, and other characters are assumed to use the weapons, move e.g. from bunks or recreation area to combat stations, etc., so you may want mapped ships for that. (Evil Robot Games offers a ton of great spaceship maps…just sayin’…) Action Points do not carry over into subsequent rounds.

Maneuvers require a Piloting check: 1d20 + ship’s Evasion modifier + pilot’s level, and on a failed check, you roll on the 1d8 failed maneuver table. Considering that the lowest fixed DC is 18 (Evade uses the enemy’s attack roll), you have a good reason to not constantly employ these. The pdf provides a total of 4 maneuvers: Loop, Burst, Evade, Hide. I couldn’t help but wish that we got more of those. The spaceship rules also includes an optional rule for the classic shaking in space we know from TOS, Raumpatroullie Orion, etc.

So yeah, I like this system, but I couldn’t help but feel that it’d have been awesome to get more sample ships, tools for ships, maneuvers, etc.

After this, we move to a d30 table of artifacts. These are presented in a rather barebones manner, so if you expected the level of detail we usually see for e.g. magic items in DCC, you won’t get that: The best way to envision them, also due to the oscillating quality of the rules-language, would be to consider them inspiration and not much more. The table includes a blaster that requires that the target saves against the attack roll or disintegrate. There is a cloning tank (that requires a few months and some serious funds) to regrow characters. To give you an example: the Endless Battery notes: “Contains infinite energy and can be used to power most basic spaceship engines, but limits potential output to amount that can be taken by anything connected without exploding.” Yeah, I mean, that’s an idea, but not much more than that. Like the aforementioned rifle, there are some entries that are really problematic: Personal Space Suit notes: Creates an indestructible bubble around a character for interplanetary or interstellar travel (treat stats as escape pod, except cannot be destroyed).” Yep, we have a RAW indestructible defensive measure sans activation, drawback, duration, etc. Are you seeing what I’m seeing? This is at best a draft in my book, but not a cleanly-designed table of properly codified concepts.

More interesting (and much better designed) would be the 6 alien poisons, which include data sludge, a particularly effective poison against automatons…and Zelodonis’ Bane. This poison is really cool: It eliminates letters from the characters’ name, does not heal, and upon running out of letters, the character is forgotten by the multiverse…including deities forgetting clerics, patrons their wizards, etc.. This can be an amazing narrative tool. It also means that clerics are well-advised to have Picasso-like names…unless they want to be forgotten. Or do they? You see, there is a big issue in rules-integrity here: The poison does not specify whether it eliminates e.g. the letter “O” entirely from the affected characters’ name, or just ONE letter. Since the damage on a failed save is 1d30 letters, I assume the latter. That being said, I do think that the number of letters is VERY high for this one.Did I mention the poison that instantly heals under a full moon? Anyhow, this section may not be perfect, but it has some good ideas.

I wish I could say the same about the prosthetics-chapter, which seems to have been designed for another system: It references Dexterity multiple times, and Agility in other entries. This should have been caught in editing. The pdf also includes a spell that behaves as a ritual of sorts, the second level eldritch limb spell, which allows you to regrow lost limbs…Slightly weird, but cosmetic: The effects f the spell have a header that labels them as misfires…which isn’t correct. (Yes, misfire section is included.) Pretty sure that some organization went wrong in layout here.

The pdf then presents a stellar system generator with 9 tables that allow you to determine the center of gravity, number of cosmic bodies, type of cosmic bodies, what they’re inhabited by, valuable resources, status of resources, animal life, level of civilization, type of government. The tables note the next table to roll on and the die to roll. Solid if you need a basic generator, but not mind-blowing.

The pdf then proceeds to present monster generation: We first get a d12 table for monster reskins that include giving classic critters scifi weapons, adding eyes or tentacles, etc. If you’re new to the genre, the table may be helpful; otherwise, you’ll already know these tricks. The pdf then proceeds to a 2-page monster generator in 6 tables: You roll for HD, Size, AC, type of attack, intelligence and appearance. Essentially, this generator provides the basics. If you want the basics taken care of, this does its job; if you want to roll up something unique with a plethora of weird abilities, use one of the other generators out there.

The pdf closes with a nice d20-based dressing table of ways to getting around, which include ziplines, exoskeletons, flying barges, etc. – classic tropes blended with e.g. litters carried by skeletons and similar strangeness. Having an issue devoted to, you know, actual rules for these would have been nice.  The pdf also sports an errata for issue #1, which does btw. not nearly cover all hiccups. It also should not be in issue #2, and instead, you know, be integrated into #1.

Editing and formatting are okay; they have improved since #1 of the ‘zine, but the magazine still would benefit from a tight rules editor/developer. Layout adheres to a solid two-column standard with really nice original b/w-artworks, and the pdf is properly bookmarked for your convenience.

Chance Phillips’ second Phantasmagoria is a step in the right direction; the glitches that negatively impact functionality are less pronounced in this issue than in the first one. That being said, I really wish that the author (and/or editor) had actually taken the time to make sure that the sometimes rather cool ideas had also been supplemented by proper rules. As it stands, this ‘zine’s primary uses are the ship-engine, some basic generators for judges new to the job/genre, and some tables that essentially boil down to half-fleshed out dressing that could use some meat on its bones.

As someone rather into the genre, I didn’t get that much out of the dressing components, and the generators fell flat for me as well; as a person, I don’t consider this to be more useful than #1, with the exception of the ship-system expansion, though I wished that had gone further.

As a reviewer, however, I can see this being significantly more useful for judges with less experience in genre fiction, though I have to pronounce a caveat emptor for them due to the glitches influencing rules-integrity. As a whole, I consider this to be a mixed bag for most judges, and as such, my final verdict will be 3 stars.