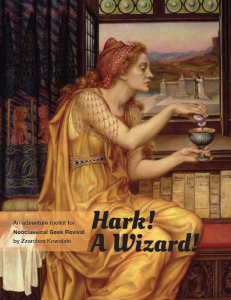 Things get worse when books note “choose xyz spells” or “1d6 random spells” – it honestly infuriates me. Anyways, this book is intended to remedy this issue to a degree in NGR. The first20-entry table contains general grimoire names for wizards to hold on to; after that, we get 8 different tables, 8 entries strong each, with different themes like hedge magic, wizard schools, quasi-religious tomes, etc. – you get the idea. After that, we get the in-depth entries for the grimoires, including read-aloud texts. The read-aloud text is often inspired, and it also sports the subtle and hilarious humor of the author here and there: The Book of Aarrrgh… for example is so named due to the supernatural entity bound within, conveniently unleashed upon reading the book… The Rot on the Roots of Yggdrasil talks about the dread MiGo, here envisioned as a demon-god…or is that a misunderstanding? The referee will ultimately decide. Little handbooks, strange astrological tomes on constellations on the Western pole…you get it. Really nice diversity here! There have been minor improvements here: E.g. the text missing in “Secrets of the Nightsky” now properly notes its sorcerous rite as “A master of constellations: Dead Pixie in a Jar” – this is not a spell, but Pixie Dust may be reached from the corpse.

The pdf then provides a brief and succinct write-up pertaining the use of the Sage power to reverse-engineer the abilities of strange creatures as spells. It’s a third of a page and works perfectly in conjunction with NGR. The aforementioned pixie autopsy has been added to the list of examples featured here.

The remainder and lion’s share of the book, though, would be taken up by a massive selection of different spells for NGR. They note their respective templates to difficulty, cost, range and complexity and add some further depth to the engine. Take “A Master of Constellations”, which allows you to set a condition to a spell to activate or deactivate, tying magic to astrological or astronomical conditions, explaining a metric ton of unique complex properties and things you see in many a module…and, obviously, letting players for once use this type of thing can be really rewarding! And yes, toggling on/off can also be done with this one. Organization is tighter here: “A Master of Constellation” no longer can be found at the start of the spell presentation, instead featring among the “M” entry of the alphabetical presentation. It should also be noted that the new edition of NGR no longer features complexity ratings – these are thus absent from the revision. Blood Pact is a new one, as is Conjure Poltergeists. The easily cheesable “Defiler of Gaia” spell has been eliminated, thankfully. Gazing into embers via Ember Trance is a nice new one that lets you scry targets, and “A Mighty Yarn” allows you to command ropes and the like. There also is a spell to interact with sizes, and these are pretty potent in NGR.

Generating illusions in a limited square, DR, enhancing items by inscribing earth runes of “Base of the Mountain”, concealing yourself in starlight…the spells have a subtle aesthetic that hearkens closer to actual real-world beliefs regarding magic, less to the flashy magic-laser-beams. This ultimately makes the chapter feel more alive and evocative. That being said, there are damaging spells – like a conical “Bee Swarm” blast or one that lets you use Beelzebub’s hellish flies. Spells for gaining influence via “BFF” are here, and there is a spell, where you can conjure forth vents, inflicting a nasty disease that may cause the target to return from death as an undead, making great use of NGR’s engine.

Speaking of spells that evoke themes we are familiar with and that tie in with game-mechanics: What about drinking blood under moonlight to replenish mana? The new version now causes intoxication, preventing abuse by less scrupulous PCs. “Carrion’s Debt Foreclosed” can generate undead from carrion eaters and there is a representation of containing spells in bubbling broth or potion, though its power will decrease over the course of time – so yeah, no stockpiling…and power-loss once more ties in perfectly with NGR’s spellcasting engine.

Now, this is something you either may like or hate, but the “Congress of Yig” no longer requires sexual intercourse with serpents, instead tying into the mutation engine component. This does prevent abuse of the spell and renders its design better. It’s less icky, but, you can take care of that, should you so choose.

Mechanically interesting would also be “Cooled Passions”, which allows for the indefinite increase of a spell’s duration at the cost of not being able to cast the spell again; alternatively, the spell can be linked to a trigger spell, which can act as a means to end that binding. Thoroughly creepy: “Cordyceps Mammalia” does the “Last of Us”-move and animates the dead via cordyceps fungi, potentially with free-willed consequences. Yes, I am freaked out by this one.

Siphoning magic from eggs is also really cool, and the verbiage is now tighter and accounts for cases like mammalian eggs and those of fish etc. There would be a spell that helps eliminating mutations at the cost of stress…which may actually hasten the transformation of deep one to hybrid, for example. Funny and interesting: “Fireworks of Happyland”, which only deal damage on a 1 or 6, with 6s adding more dice for potentially brutal consequences, otherwise focusing on blinding foes temporarily.

The “Grand Idol of Bhaal” allows for the caster to bind demons, djinn, etc. in idols, once more codifying a classic trope within the context of the game. What about “Happily ever after”, a spell that acts as a trigger based on e.g. a prince’s kiss. Or Influence-based hypnotic gaze, appeals that damage supernatural targets or a spell to remove texts, images, etc. via” lost to the ages”? On the necromancy-side, we get a spell to animate a target you have personally drained as a vampire…and, really macabre (and some might argue, tasteless), one that animates a stillborn child as an undead. Yeah…personally, I could have done without the existence of this one. On the plus-side, strange spores, calling miniature comets and tapping into the power of e.g. eclipses makes sense and works well.

There is also an advanced locking spell…and Schmetterling (German for Butterfly, just fyi): A flight spell that only allows the target to be attacked in melee by non-fliers when interrupted while attacking someone in melee. There is a spell to create a portal in the shadow of objects…and one that lets you emit a horrid blast of static, white noise-like shrieking. Oh, and what about locking supernatural targets into the skulls of targets? Yes, they may be alive. Yes, those voices may either be insanity…or dread magic…Well, you get 3 guesses what Toad! does…

Editing and formatting are very good, I noticed no serious glitches on either formal or rules-language levels. The new design decisions made herein are tighter and less open for abuse. The revised edition’s öayout adheres to a nice two-column b/w-standard and the pdf sports a couple of nice, original b/w-artworks inside. The new presentation makes using the pdf smoother, so yeah, an improvement there. The content-expansion, however, is paid for with an absence of bookmarks that is puzzling and constitutes a comfort-detriment.

Did I love the cool modifications and options presented in all those spells? Yeah! The revised rules are tighter, clearer and less prone to abuse. Similarly, I really, really liked the sample read-aloud texts and diverse ideas for grimoires, making spellbooks feel, well, interesting and creative. The subtle, dark humor of the author makes reading this rules-book actually enjoyable.

…but it’s not a way to give NPC wizards a cohesive set of spells in a few seconds/minutes. It’s an expansion of the magic-engine. That rocks. It sports great spellbook dressing. Which once more rocks. However, as a generator to make quick wizards for NGR? Honestly, I don’t even get where that aspect is coming from. The revised edition STILL does not really offer that. Beyond the grimoires, it does not expedite the process of making a wizard in the slightest.

As a reviewer, that leaves me in a weird place, particularly since the revised edition had the chance to make finally good of its promise. Frankly, I should rate this down. Were I to rate this on its merits as a generator, I’d have to pronounce this a failure, as an, at best as a mixed bag. Then again, if I rated this as a spellcaster’s expansion for NGR that adds depth and fun to the already impressive magic system, then this would be a 5 star + seal of approval recommended masterpiece.

The matter of fact remains, though: This is NOT what it was advertised as. While I consider this to be a must-won expansion for fans of NGR, I have to take that into account as a reviewer.

As a wizard generator, I’d consider this to be a 2-star file. As a magic-expansion for NGR, I’d consider it to be 5 stars + seal of approval. The new content and design-wise streamlining makes this better than before, but lack of bookmarks mitigates this improvement. In the end, my final verdict will fall in between these, at 4 stars.