Of Stave, Stone, and Heart: A Guide to the Runes for Game Master 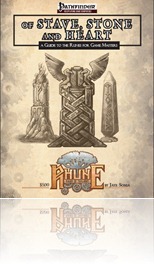 So this is the sourcebook that introduces us to the concept of runes in the Stormpunk-setting of Rhûne and rather interesting – instead of opting to just replicate the younger and elder FuÞark, we instead get another distinction that is both easy to grasp and elegant: The so-called elder runes are sources of primeval power and lost when the gods shattered the grand galdr – touched by the gods, one of these runes can stem epidemics, change the tide of battle etc. Elder runes are divided equally into 3 groups of 8 runes: The World runes have been placed to discover and affect the course of history. The second set of runes affects the gods and is hidden in the realms beyond, the planes situated on (and around) the world tree. The third category is most mysterious and guides the hearts of men, having metaphysically been placed in the hearts of men.

The younger runes on the other hand, are widely used and can be seen as mortal equivalents to the elder runes, things both tapping into powers ancient and strong, but manageable by mortals. Since this guide is not written exclusively for the Rhûne-setting, we also get extensive advice on how to introduce runes to settings with different rune-densities. Better yet, the advice on how to use the runes is actually very sound – runes are not simply a magic item, they are host to a vast chain of signifiers and potential consequences and thus, advice for DMs on how to properly convey the symbolism of these ancient scripts and the tied-in concepts. Better yet, the pdf provides interesting an easily integrated ways to limit runic knowledge: The first lets a character chose a mental attribute and learn attribute modifier runes. The other divides the 3 types of runes intro aforementioned groups and assigns a mental attribute to each group, thus also limiting access, but being more versatile and thematically connected. The formula by which one learns runes is also rather simple and elegant in design – nice!

And after that, we get into the write-up of the runes presented in rune-stats: Each rune belongs to one of the three types has an associated domain that is strengthened by learning the rune (or grants a save-bonus against the spells). The benefits for the elder rune and younger runes are also included – essentially, these runes can add metamagic benefits to a given spell – greater spell keys and effects can be used by using the elder runes, regular spell key benefits by younger runes. Additionally, each rune is keyed to a specific skill which becomes a class-skill or adds a +2 bonus to skill-checks for the people who learn the rune. Better yet, each and every one of the 24 runes gets its expertly-crafted visual representation and quotes to add expertly-written fluff to the cool crunch.

Further plot seeds are hatched by providing us enticing legends of the mythic Grand Galdr and three tomes that sprang from it before introducing us to a new cantrip to analyse runes and a spell to enhance the usage of runes before we get 7 sample runes tones that can be activated via spellcraft and the sacrifice of spell-slots – each of the rune-stones, once again, coming with its own beautiful artwork.

Finally, we get the 5-level Vitkarr PrC: They get d6, 6+Int skills per level, bad BAB, good will-save and medium fort-save, full spell progression, may choose up to 3 of 10 different runic discoveries (ranging from learning to cast a spell as a swift action to adding wis-mod-damage to fire and ice-spells to improving armour and weapons with his runes, just to give some examples), craft runewands that enable the Vitkarr to cast a spell not prepared to the creation of a Galdr that permanently enhances an ability score. Well-rounded, flavourful PrC with a nice host of options to choose from.

Editing and formatting are top-notch, I didn’t notice any glitches. Layout adheres to a 2-column standard with a parchment-like, yellowish background. No printer-friendly version is provided, which is somewhat of a pity. The b/w-artworks are all original and deserve special mention in that Terry Manada is an extremely talented artist that has created some of the most beautifully-detailed artworks I’ve seen in any RPG-publication. The pdf also comes fully bookmarked.

Wow! I honestly expected to hate this pdf – as someone quite invested in Norse culture and mythology it is hard to please me with an homage to such cultural elements and this pdf actually succeeds in it: The Runes are easy to insert options available to all characters that enhance a character’s capabilities without tipping the precarious scale that is game balance. Yes, no rules to create new runes are provided, but that’s for both a fluff and a crunch reason and feels very valid to me – in fact, I consider that to be a very good decision – after all, each additional rune adds not only to some piece of crunch, but also represents spiritual and material forces. Add to that the cool runestones, the nice PrC and the concise writing by author Jaye Sonia that makes this a joy to read and we’re in for a great, cool pdf to introduce runes into your game. Better yet, this pdf does not invalidate other rune-based systems like SGG’s Feats of Runic Might or RiP’s Cruth Galdr from “Secrets of Forgotten Magic Items”. That being said, my direct comparison is one to dread – the system from Open Design’s Northlands, a book I was not only rather involved with, but which actually constitutes my favorite PFRPG-book. Period.

So, does this hold up in direct comparison? Well…yes, kind of. Rune Magic in Northlands requires the investment of the Rune Mastery-feat and a trial, so naturally the benefits are somewhat rather significant and also grow with character levels. Personally, I have to say I slightly prefer the system from Northlands, since it feels a bit more representative of the ancient powers. That being said, though, this pdf still provides a very compelling and cool system for runes and with sufficient time, both systems could possibly even be mixed. The additional content, from the rune-stones to the new PrC herein can be considered top-notch – but the pdf is also rather pricey for the amount of content provided. Usually, I’d rate the pdf down for being too short, but seeing how the general quality (and amount) of the artwork is rather high and the presentation professional, the price-point feels rather justified to me.

How to rate this, then? Now that’s the tricky part – In the end, my final verdict will reflect the fact that this is a solid addition to your campaign and a solid alternate runes-system for your system. Fans of Rhûne have to check this out anyways. My final verdict will thus be 4.5 stars, rounded up to 5 stars.

Of Stave, Stone, and Heart: A Guide to the Runes for Game Master is available from: