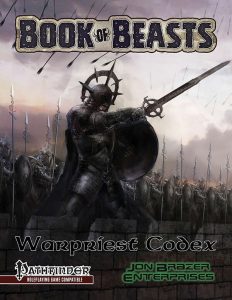 This installment of the Book of Beasts-series clocks in at 26 pages, 1 page front cover, 1 page editorial, 2 pages of advertisement, 2 pages of SRD, 1 page back cover, leaving us with 19 pages of content, so let’s take a look!

This pdf was moved up in my reviewing queue as a prioritized review at the request of my patreon supporters.

So, what is this? Well, if the name “Codex” implies, this supplement is all about NPC builds, and provides statblocks in roughly the same manner as you’d expect from e.g. the NPC Codex. The book provides one statblock for every level ranging from level 1 to level 20, and presents between 1 and 2 statblocks per page; in the lower level-ranges, we sometimes have two statblocks per page. It should be noted that these statblocks per se are designed to be provided for generic NPCs, but often also come with brief flavor descriptions that allow for immediate, well-rounded NPC use – again, much like the NPC Codex, though the amount of sample prose in this book is higher than in comparable supplements. The majority (around 23rds) of the NPC statblocks are supplemented by this prose. These also offer some roleplaying suggestions for the respective character, which I considered to be a nice touch. Base statistics are also provided for the characters, which is a big plus, imho. Many of the statblocks also come with advice for use in combat encounters, and I mean beyond the notes in the statblock itself

Okay, so, another nice touch is that the statblocks list the respective movement rates without armor, and it should be noted that the statblocks that I have reverse-engineered checked out both regarding math and formatting – which is admirably concise and precise. Speaking of precision – it may be a small thing, but I enjoyed seeing that favored class options were not always defaulted to the same choice for every build, and it should also be noted that there are no simple build progressions. By this, I mean that e.g. the level 8 statblock is not simply an upgrade of a level 4 statblock previously used; the NPCs are genuinely different builds. There also is an above-average unity between build and story, when applicable.

For example, it makes sense that the CR ½ Azathoth cultist warpriest, hurt and abused by all, has a good AC for her level and a spell/blessing selection that lets her retaliate against the world. The level 2 gnomish warpriest, in contrast, is a smart one that can use the combination of terrain control and SPs + spells to make up for a lack of mobility as a surprisingly effective low-level guerilla. Interesting here: The gnome actually is pretty charismatic, something that e.g. the grizzled mercenary priest (Charisma 6) most assuredly is not; before you consider that to be illogical, do note that the fellow has some Diplomacy skills in spite of Charisma being the dump stat. This decision makes in-game sense and does not compromise the build. Need a skirmisher? Okay, what about a wyvaran airborne reanimator who uses mobility and minion animation as valid strategies. The more charming corsair chaplain is interesting, in that he represents a distinctly swashbuckling angle that uses Dexterity as a dumpstat, making up for this with magic and smart blessing choice.

A half-elven forgepriestess, or what about a gnoll-embalmer of Anubis? It’s really nice to see that the *concepts* behind the builds and their respective executions form a unity, and if you e.g. wanted to see an efficient ranged warpriest for a change of pace, you’ll find the like herein as well. From glamered armor worn by champions of greed to ritual bloodletters sporting manacles of cooperation and e.g. a blood reservoir of physical prowess, to an infernal dragoon shocktroop of Asmodeus focused ruthlessly on efficiency, we have this unity of flavor and rules mirrored everywhere, and also receive e.g. builds for hobgoblin saviors trying to establish a proper homeland for goblinoids, and if you need a good mentor/high-level ally, the pdf obliges as well, with e.g. a neat CR 16 aasimar demon slayer whose build is not exclusively fearsome to the spawn of the Abyss.

While we’re speaking of high-level NPCs, there are creative concepts here as well – the eternal artisan, for example, would be a samsaran warpriest of Hecate, at once excellent creators of potent magic items and fearsome foes. Of course, mighty dwarven high priests and lethal Cthulhu cult leaders of gillman stock can also be found. While the variety of builds per se is neat, from divine commander to champion of the faith to forgepriest, we also have a couple of nifty archetypes used in the builds.

Editing and formatting are very good on a formal and rules-language level. To the point where it was a genuine boon for me. I’ve been working on quite a few books with serious formatting issues, and this one persistently managed to get all the little components right. Layout adheres to a nice two-column standard with a black border on the side – this border may not be too printer-friendly, but it most assuredly is aesthetically-pleasing. The book comes fully bookmarked for your convenience, with individual bookmarks for every warpriest, presented in a clean manner. Artworks are of the same quality as the cover, which is another nice plus.

Dale C. McCoy, Jr. and Richard Moore have provided a pleasant surprise for me: You know, I usually am not that keen on reviewing NPC Codices, because they’re a ton of work for me, and hard to keep saying meaningful things about, if done right. You know the kind. They’re stats. Done. In a way, this book does a lot right here: It manages to provide a union between concepts and individual characters; the builds are diverse and fun, and go the extra mile in a variety of ways; from the absence of builds that are simple progressions to the small details prevalent everywhere, this pdf shows that the authors genuinely CARED.

That care translates to the reader. I’m not a big fan of the warpriest class per se, but after consulting this book, I found myself wanting to use these builds in my game, a response that only precious few NPC codices manage to instill. In short, this is a genuinely well-wrought NPC Codex that manages to endear me to statblocks for a class I am not particularly fond of…and that’s seriously worth something. My final verdict will be 5 stars, and for the care, the small touches, the going the extra mile, this also receives my seal of approval.

You can get these cool, diverse warpriests here on OBS!

There is also an inexpensive subscription for these pdfs going on – you can check it out here!