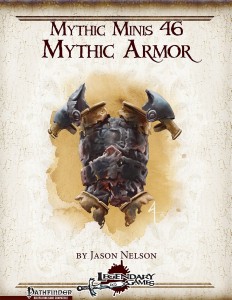 -Cloudcloth Armor: This padded armor not only enhances your Stealth and grants mistsight – it also sports a number of interesting additional options – like scaling rounds of gaseous form, which also are activated reflexively. The true star-ability, though, would be the limited ability to absorb gas/mist effects, which may even be utilized to force gaseous opponents into physical forms. Two thumbs up for this beauty!

-Cuirass of Miracles: bolstering, deathless and determination, crafted from elysian bronze, with mythic characters receiving even more significant bonuses. Via mythic power, the wearer can temporarily provide the determination quality to allies and even utilize mythic breath of life. Additionally, the armor can store up to 7 mythic surges, but each surge requires 7 subsequent days of channeling the surge into the armor – all seven can btw. be expended to cast mythic limited wish. Very powerful one, even for mythic games, but also pretty iconic.

-Dragonmail: Essentially dragon-mail made from a mythic dragon, with numerical escalation for mythic characters. Okay, I guess. Oddly has no weight and the CL of 8 seems too low.

-Earthenport Plate: While the fluff makes this stoneplate feel rather heavy, the stats say it occupies the ring-slot and weighs nothing -which can’t be true. Mechanically, the armor can be imbued with powerful additional enchantments, provided the wearer channels mythic power into it. Really cool – the armor can soften earth and stone and once the wearer is submerged in rock, whisks him away as per a teleport, potentially even overcoming hampering effects and granting DR/SR to allied dwarves if the wearer is a dwarf. I REALLY like this armor, though the faulty stats somewhat detract from it.

Editing and formatting are good, but not as good as in most Legendary Games-pdfs, the CL/weight glitches feel pretty significant to me. Layout adheres to Legendary Games’ 2-column full color standard and the pdf has no bookmarks, but needs none at this length.

Jason Nelson’s mythic armors are fun, evocative pieces and generally can be considered in the upper echelon of items, with especially the cloudcloth and earthenport armor being stand-out examples of cool items. That being said, the glitches and pretty bland execution of the dragonmail did somewhat sour the pdf for me – it’s still a nice file, though, and hence, my final verdict will clock in at 3.5 stars, rounded up to 4 for the purpose of this platform.